NATO's chief said that "all signs" suggest Russia will attack its neighbor as the alliance relocated its Kyiv staff. Ukraine's President Zelenskyy delivered a passionate speech in Munich. DW has the latest. 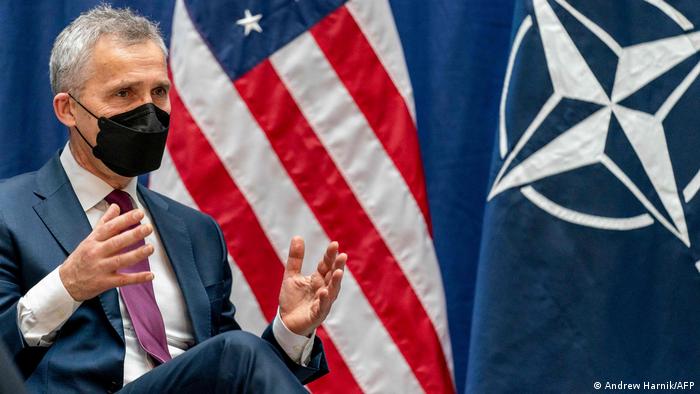 "No troops are being withdrawn, as Russia says, but new troops are being added," he said, adding that there were also indications that Russia was preparing to create a pretext for an attack.

Still, Stoltenberg said NATO is committed to a political solution. "We want to get Russia to change course and sit down with us," he said.

NATO has relocated staff from Kyiv to western Ukraine and Brussels amid the escalating tensions, according to a statement shared with DW.

Ukraine is not a member state, and NATO has no troops there, but there are areas of cooperation and some individual NATO member states have made contributions to Ukraine's national defense.

In Kyiv, NATO has maintained a NATO Liaison Office and a NATO Information and Documentation Center since the late 1990s.

Meanwhile, the White House reiterated warnings that Russia could launch an attack against Ukraine at any time, and said that US President Joe Biden would convene a rare meeting of the National Security Council on the situation in Ukraine.

The officials surveying the area included Ukrainian minister Denys Monastryrskiy. The officials fled to a bomb shelter and later left the area.

Fighting has ramped up in the region, with Ukraine reporting two of its soldiers having been killed by separatist attacks on Saturday.

Four other servicemen were injured. The fatalities were the first in over a month.

Monitors for the Organization for Security and Co-operation in Europe (OSCE) reported that there have been around 1,500 ceasefire violations in eastern Ukraine over the past day.

EU foreign policy chief Josep Borrell on Saturday expressed concern at a spike in ceasefire violations noted by the OSCE.

"We commend Ukraine's posture of restraint in the face of continued provocations and efforts at destabilization," he said in a statement on behalf of the EU.

Borrell also raised concerns over Russian "manipulation" of information to support what looks like fabricated pretexts for military escalation in Ukraine.

"The EU is extremely concerned that staged events... could be used as a pretext for possible military escalation," Borrell said.

"I urge fellow countrymen who are in the reserve to come to the military commissariats. Today I have signed a decree on general mobilization," self-proclaimed Donetsk People's Republic leader, Denis Pushilin, said in a video message.

Ukrainian government forces and pro-Russian rebels have reported increased shelling in the east over the last few days. On Saturday, Kyiv said one of its soldiers was killed.

Washington and other Western allies say the apparent flare-up could form part of a Russian pretext to invade Ukraine.

"There is simply no evidence to these assertions and it defies basic logic to believe the Ukrainians would choose this moment, with well over 150,000 [Russian] troops arrayed on its borders, to escalate a yearslong conflict,"US President Biden said on Friday.

Russia has repeatedly denied any plans to attack its neighbor.

On Friday, the breakaway regions started evacuating residents to Russia. They cite fears of an imminent attack by Ukrainian forces — an accusation Kyiv flatly denied.

Foreign ministers from the G7 group of wealthy nations said Saturday they saw no evidence that Russia is reducing military activity near Ukraine's borders and remain "gravely concerned" about the situation.

"We call on Russia to choose the path of diplomacy, to de-escalate tensions, to substantively withdraw military forces from the proximity of Ukraine's borders and to fully abide by international commitments," the countries said in a joint statement released by Britain's Foreign Ministry.

"As a first step, we expect Russia to implement the announced reduction of its military activities along Ukraine's borders. We have seen no evidence of this reduction," they added.

Speaking at the Munich Security Conference, Germany's Chancellor Olaf Scholz warned that "Europe once again faces a threat of a war, and risk has by no means been averted."

The German leader said the West must not be "naïve" and reaffirmed Berlin's commitment to countries deciding for themselves whether or not they will apply for NATO. Scholz said the diplomacy could still solve the Ukraine crisis

At the same time, he hinted that the West was ready to compromise on other issues, as there was a difference between "untenable demands and legitimate security interests" raised by Russia. Specifically, he pointed to "transparency around weapons systems, risk mitigations mechanism and new approaches on arms control."

The British prime minister, Boris Johnson, told the Munich Security Conference Russia has nothing to gain from "this catastrophic venture."

He said if Russia invaded Ukraine, the shock would echo worldwide.

"The risk now is that people will draw the conclusion that aggression pays, and that might is right," Johnson said.

Even at "this 11th hour," he said there was a chance to "pursue the path of peace and dialogue."

Von der Leyen: 'We must diversify both our suppliers and our energy sources'

US Vice President Kamala Harris met Ukrainian President Volodymyr Zelenskyy on the conference sidelines, telling him: "Any threat to your country we take seriously."

Zelenskyy responded saying: "We clearly understand what is going on. This is our land. We want peace."

He noted that with Russian troops at his country's borders, Ukraine's army was, in fact, "defending all of Europe."

Earlier, Harris warned Moscow that an invasion of Ukraine could likely lead to an even bigger NATO footprint on Russia's doorsteps.

"We will not stop with economic measures, we will further reinforce our NATO alliance on the eastern flank," she said. 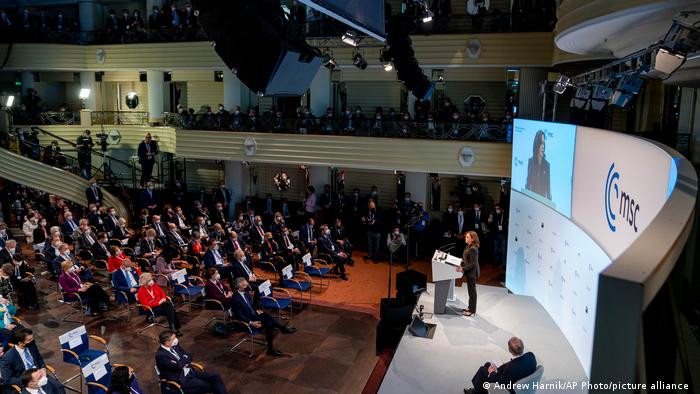 The US has warned that Russia now has some 190,000 troops on the borders with Ukraine.

The Kremlin said that Russian leader Vladimir Putin and French President Emmanuel Macron would speak on the phone on Sunday. Next week, Russia's Foreign Minister Sergey Lavrov is due to meet with his US counterpart Anthony Blinken.

Speaking at the Munich Security Conference on Saturday, Zelenskyy proposed a meeting with Putin in a bid to stave off the possibility of an invasion.

"I do not know what the Russian president wants. For this reason, I propose that we meet," Zelenskyy said.

Ukraine's president also said that Kyiv needed "security guarantees" in the face of a possible invasion.

"You're saying the war is about to start, then what are you waiting for? We won't need your sanctions when the bombs start....When you're asking what can be done. Lots of different things can be
done. We can provide you with a list," Zelenskyy said.

Germany Foreign Minister Annalena Baerbock on Saturday urged Russia to "come back to the negotiating table" to end the standoff over Ukraine.

In an interview with DW on the sidelines of the Munich Security Conference, Baerbock said a "highly dangerous situation" has materialized after fighting in eastern Ukraine flared up this week.

"We once again renew our sincere invitation [to Russia] to hold discussions within the framework of the Minsk processes' Normandy format," she said.

"In the last 48 hours, we've seen false flag operations once again. They have been used as a pretext by separatists to say there's been further escalation. We've therefore now introduced further measures to show we are prepared for all eventualities," Baerbock added.

Despite criticism about the level of military support offered to Kyiv, the foreign minister insisted that Germany is "totally on the side of Ukraine" and is the country's largest financial donor.

She said Berlin would "look at how we could provide more support in terms of security."

'We are prepared for all eventualities': Baerbock

Defense Secretary Lloyd Austin vowed the US would stand with its Baltic allies during a visit to Lithuania.

"I want everyone in Lithuania, Estonia, and Latvia to know, and I want President (Vladimir) Putin in the Kremlin to know, that the United States stands with our allies," Austin said. 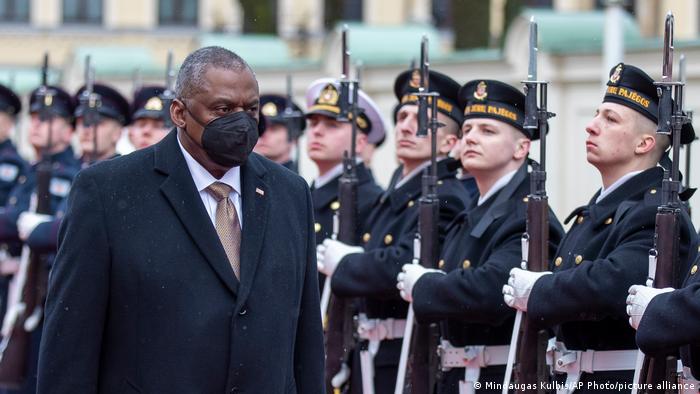 Austin said Russian forces near Ukraine were beginning to "uncoil"

The US officials warned that Russia's military was "poised to strike" Ukraine.

"For months now, Russia has been building up its military forces in and around Ukraine, including in Belarus. They are uncoiling and they are now poised to strike," Austin said in Vilnius.

Lithuania's President Gitanas Nauseda urged the US to bolster its military presence in the Baltic states.

"The Russian military buildup at the eastern NATO border is changing the security situation," Nauseda said.

"We are ready to provide additional supplies of defensive weapons ... weapons that are to be used to defend (Ukraine's) territory, defend cities, defend people, places where they are against the aggressions of the Russian army," Morawiecki said during a televised news conference in Munich.

On Saturday, Russia also denied allegations that it was behind cyber-attacks on dozens of official Ukrainian websites.

The US, UK, and Ukraine blamed Moscow of being behind the spate of distributed denial of service (DDoS) attacks that briefly knocked out banking and government websites.

"We categorically reject these baseless statements of the administration and note that Russia has nothing to do with the mentioned events and in principle has never conducted and does not conduct any 'malicious' operations in cyberspace," the Russian embassy in the US wrote on Twitter.

Russia's Defense Ministry had said the air force, southern military district units, as well as the northern and Black Sea fleets were to be involved.

Kremlin spokesman Dmitry Peskov said Russia — which has the second-biggest nuclear arsenal in the world after the US — had given notice to all proper channels, and that the drills "should not cause anyone concern."

The mood in Ukraine is changing, DW's Fanny Facsar reports