Biden is 'convinced' Putin has decided to invade Ukraine

US President Joe Biden said Russia's Vladimir Putin has made the decision to invade Ukraine in the coming days. The Ukrainian capital, Kyiv, would be a target of the invasion, according to Biden. 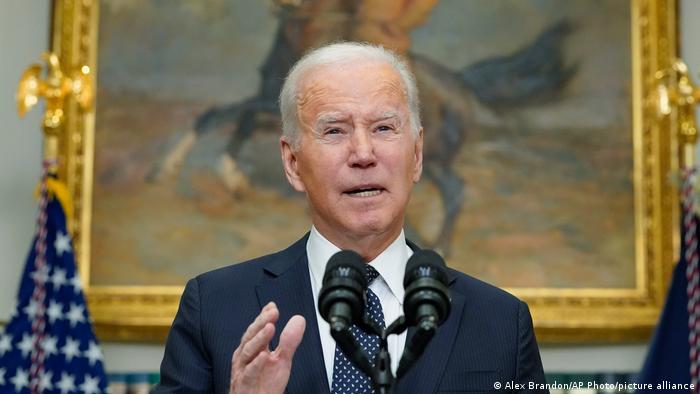 Biden reiterated that the assault could occur in the "coming days"

US President Joe Biden on Friday said the US believes Russian President Vladimir Putin has made up his mind to invade Ukraine.

Biden said, "I'm convinced" Putin has decided to further invade Ukraine. He cited the "significant intelligence capability" of the US government. "We have reason to believe that," he added.

Speaking at the White House, Biden said the attack could come in the next "week" or "days" and that targets would include the capital, Kyiv, "a city of 2.8 million innocent people."

"We're calling out Russia's plans. Not because we want a conflict, but because we are doing everything in our power to remove any reason Russia may give to justify invading Ukraine," Biden wrote later on Twitter.

Russia has repeatedly denied that it has no plans to attack its neighbor. But Western powers have warned of a possible Russian invasion, with over 150,000 Russian troops massed on Ukraine's borders.

A Russian envoy said earlier this week, "There will be no escalation in the coming week, or in the week after that, or in the coming month." But the US has warned that an attack was still possible.

'Not too late' to return to diplomacy

The US president described the decision he believes Putin has made as a "catastrophic and needless war of choice" but sought to emphasize that a diplomatic path is still an option should Putin choose to de-escalate in a meaningful way.

With the US Secretary of State Antony Blinken scheduled to hold talks with Russian Foreign Minister Sergey Lavrov next week, Biden insisted it was "not too late to de-escalate and return to the negotiating table."

But Biden warned that if an attack comes, Putin will have "slammed the door shut on diplomacy."

US, allies determined to support Ukraine

Before addressing the nation and the world, Biden said he had made "two vital calls."

The first call he said was to a bipartisan group of members of the US Congress and Vice President Kamala Harris, who are all attending the Munich Security Conference. The second call was to EU and NATO members' heads of state.

In those calls, Biden said he briefed allies on what the US believes will happen in Ukraine in the coming days.

While he described an "overwhelming message on both calls of unity, determination and resolve," Biden cited Thursday's shelling of a kindergarten in Ukraine and disinformation in Russian media, saying the Kremlin was seeking to create a pretext for a Russian invasion.

"There is simply no evidence to these assertions and it defies basic logic to believe the Ukrainians would choose this moment, with well over 150,000 [Russian] troops arrayed on its borders, to escalate a yearslong conflict," Biden said.

"All these are consistent with the playbook the Russians have used before to set up a false justification to act against Ukraine," Biden said, adding that Ukrainians "have refused to allow Russia to bait them into war."

Ultimately, Biden said the US would "defend every inch of NATO territory" and, along with allies, "will support the Ukrainian people."

Mercenaries, cyber-attacks, targeted disinformation — Russia no longer depends on classical methods of warfare in its campaign to destabilize Ukraine.

Ukraine crisis: US set to sell Abrams tanks to Poland

The US is moving to bolster Poland's defense capabilities amid the rising threat of war between neighboring Ukraine and Russia. Defense Secretary Austin said the conflict could lead to a flood of refugees.