The three-day Munich Security Conference (MSC) kicked off in the Bavarian capital on Friday, with a major focus scheduled to be on Western strategy to counter the Ukraine crisis.

Notably absent are official representatives from Russia, the country that has triggered new fears of war in Europe by amassing thousands of troops on the Ukrainian border.

The chairman of the conference, Wolfgang Ischinger, told reporters that he could not remember when there had otherwise been "so many overlapping crises" to discuss.

Besides the Ukraine crisis, issues such as pandemic strategies and the fight against climate change are to be discussed at the conference. Other panels will focus on less pressing issues, such as the advance of cryptocurrency.

The conference opening has been somewhat overshadowed by allegations in German media that the chairman, Ischinger, has used the international contacts gained through the MSC to make money.

The news magazine Der Spiegel had reported that the consulting firm Agora Strategy Group, which he co-founded in 2015, had offered for sale appointments and contacts at the conference. 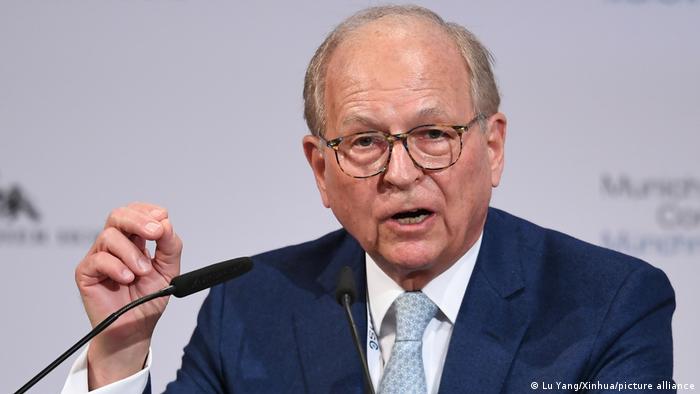 Ischinger said in the ARD interview that he had "no knowledge" of any such offer and that he had "no operative control" over Agora, describing the allegations as "completely baseless."

UN Secretary-General Antonio Guterres said on Friday at the event that the world was probably in a more precarious security situation than during the Cold War.

"I am often asked whether we are in a new Cold War," Guterres said in his opening address. "My answer is that the threat to global security now is more complex and probably higher than at that time.''

Guterres warned that a conflict in Ukraine would be "catastrophic" and that it was "high time to seriously de-escalate."

"With a concentration of Russian forces around Ukraine, I am deeply concerned about heightened tensions and increased speculation about a military conflict in Europe. I still think it will not happen. But if it did, it would be catastrophic," Guterres added.

German Foreign Minister Annalena Baerbock said in her address that Russia's troop buildup presented an "unacceptable threat" and that the framing of the "crisis" needed to be examined.

"This crisis is therefore no Ukraine crisis, we have to be very careful about our framing. It's a Russia crisis," Baerbock said.

Baerbock: 'It's no Ukraine crisis, it's a Russia crisis'

US Secretary of State Antony Blinken stressed the importance of unity as he spoke, and said that all efforts were being made for there to be a diplomatic solution. Blinken questioned whether Moscow was on the same page.

Blinken said "we are deeply concerned" that Russia may not be embarking on a diplomatic path.

US Vice President Kamala Harris said there was still hope that Russia would de-escalate but added the US was ready to hit Moscow with tough sanctions in the event of an attack.

"We remain, of course, open to and desirous of diplomacy... but we are also committed, if Russia takes aggressive action, to ensure there will be severe consequence in terms of the sanctions we have discussed,'' Harris told NATO Secretary-General Jens Stoltenberg during the conference.

Who is attending the conference?

More than 100 ministers and more than 30 heads of state and government are attending the Munich meeting.

Guests include German Chancellor Olaf Scholz and US Vice President Kamala Harris, who will be among those to deliver speeches.

MSC chair: 'I believe that war is avoidable'

Baerbock and Blinken, will be, among other things, heading a discussion entitled "Unlearning Helplessness: Meeting Global Challenges." That discussion will be hosted by Christoph Heusgen, former German Chancellor Angela Merkel's adviser on foreign security policy, who has been tapped to succeed Ischinger as MSC chairman.

Ischinger has held the reins at the conference for 14 years.

What effect does Russia's absence have?

Ischinger said on Friday he deeply regretted that Russian government representatives had rejected invitations to join the conference.

While admitting that attendance would have "limited enjoyment value" for them, Ischinger told German broadcaster ARD their absence meant Moscow had no chance to give its input on the Ukraine crisis.

"The chance of us actually arranging meaningful talks on the issue in Munich is, of course, much greater if an authorized Russian government representative with permission to speak were present," he said.

He said "quite a number of Russians" had canceled because COVID restrictions in place at the conference required attendees to be vaccinated with vaccines approved in Germany. Russians are usually vaccinated with Russian-made vaccines that have not yet been authorized in the EU.

He did add, however, that there would be very experienced people from Russia attending the conference.

Ischinger slammed Russia's depiction of the crisis as having been caused by Western threats to its territorial integrity, describing such a view as "far-fetched."

However, in an interview with DW, Ischinger said he was "skeptical" that Russia would go as far as attacking the Ukrainian capital, Kyiv.

"I would think that any responsible Russian military commander, and I would also hope any Russian political responsible leader, would think about how would you — once you have moved all your military equipment over hundreds of kilometers into that, say, up to Kyiv — How are you going to keep this huge area with many millions of Ukrainians under your control?" he said.