Munich Security Report: A grim analysis of a wave of global crises | Germany | News and in-depth reporting from Berlin and beyond | DW | 14.02.2022

Munich Security Report: A grim analysis of a wave of global crises 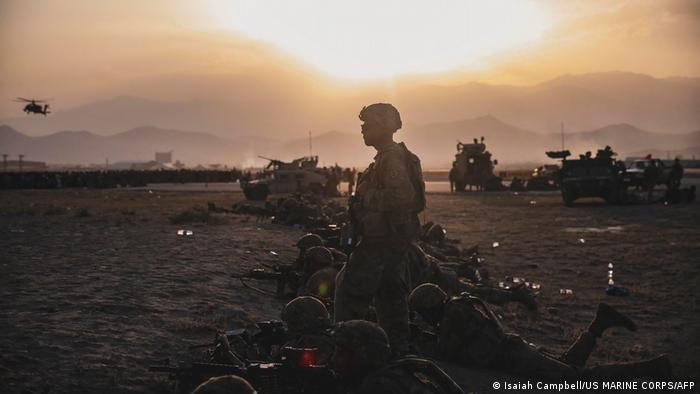 Wolfgang Ischinger is a long-serving diplomat who always appears calm and collected. In his last year at the helm of the Munich Security Conference (MSC), journalists have been keen to hear Ischinger's assessment of the current crisis with Russia.

Ischinger is convinced that "more needs to be done to make people aware of the importance of deterrence as a method of conflict prevention."

He has also remarked that he welcomes the fact that "Europe once again has a voice in the intensive diplomatic discourse," after it "almost seemed that Europe would be reduced to the role of onlooker while others discussed both the crisis and how it might best be resolved."

MSC chair: 'I believe that war is avoidable'

But Ischinger and his team have their sights set on much more than just the current crisis on the Ukrainian-Russian border. The 70-year-old has been MSC chair since 2008.

The Munich Security Conference is an annual conference on international security policy that has been held since 1963. It is not an official government event, but a forum for informal and discrete discussions between the high-level international participants.

Looking back at the past 14 years, it is with some consternation that Wolfgang Ischinger "cannot recall a time when there were so many overlapping crises." That's a reference to the challenges posed by Iran, China and the evolving Euro-Atlantic security architecture. A long list that could still encompass many other global hot spots.

Indeed, the extraordinary profusion of unresolved crises is itself the central topic in this year's MSR. Traditionally, the report is published just a couple of days before the arrival of the official guests at Munich's legendary Hotel Bayerischer Hof. It sets both the agenda and the intellectual tone. This year, it's titled "Turning the Tide – Unlearning Helplessness."

The report describes a mood of "collective helplessness." In the same way as ordinary individuals, whole societies can be overcome by a sense that they simply have no answer to the challenges they face.

"There can be no doubt about it: 2021 could not in any way be characterized as a year of geopolitical optimism. New crises hit the headlines on a more-or-less monthly basis, contributing to the sensation that a growing wave of crises was threatening to overwhelm us," the report reads.

It concludes that this has led to a vulnerability to which liberal democracies are particularly prone. But what makes this mood so perilous is that it brings with it the danger that the world fails to face up to the challenges that it is confronted with, even though the resources, the strategies and instruments required do so are available.

Ulrike Franke is a security expert with the European Council on Foreign Relations (ECFR). She reads the report as an urgent call to the West to do more to come up with solutions to the problems facing the world. According to Franke, the diagnosis of "helplessness" is essentially a continuation of the 2020 MSC report that focused on the notion of "Westlessness," a much-referenced neologism describing a widely shared sense of dismay and disillusionment coupled with an existential restlessness concerning the very viability of the West.

The current report is based on the outcome of a global survey on levels of risk assessment. Germans, for instance, see climate change and the resulting extreme weather events as the greatest threat. For respondents in the US, meanwhile, the main cause of concern stems from possible cyberattacks.

In China, respondents see the US as posing the greatest threat. In Russia, growing inequality is the biggest worry. And India is the only country where people most fear a hostile nuclear attack.

Franke believes the results of the surveys have a big influence on the overall security debate.

From Afghanistan to supply chains

Given that their focus is on crises and threats, the annual security reports are not necessarily harbingers of optimism. That became clear seven years ago with the publication of the very first Munich Security Report. It carried the headline: "Collapsing Order, Reluctant Guardians." And, as the crises have grown in magnitude through time, the reports have also expanded. While the 2015 first edition had a modest 72 pages, the latest report is more than twice that size, weighing in at 182 pages.

Looking back on Germany's involvement in Afghanistan

They cover not only risk assessment and the Ukraine crisis, but also a raft of other crises and their impacts. For example: the chaotic exit from Afghanistan, the deteriorating security situation in Mali and the rest of the Sahel region, destabilization in the Horn of Africa and the Persian Gulf, growing global inequality, as well as fragile supply chains in the technology sector.

These topics will also be of central concern at this year's security conference, which aims to remain true to its traditional formats despite the ongoing pandemic. Nevertheless, events will take place in "extremely restrictive conditions: a purely working conference," as Ischinger emphasized.

"The demand for informal multilateral encounters — either one-on-one or in smaller circles — has increased enormously. Not just because of the mood of crisis but also because of the long months during which there have simply not been any person-to-person meetings," he said.

Ischinger expects to welcome 35 heads of state and government to the Hotel Bayerischer Hof, as well as some 100 government ministers — above all foreign and defense ministers. UN Secretary-General Antonio Guterres will be among the speakers, and German Chancellor Olaf Scholz and several members of his cabinet are scheduled to travel to Munich.

NATO Secretary-General Jens Stoltenberg is also set to attend, as are the top 10 EU representatives. The US will, as always, be sending a strong delegation, this time led by Vice President Kamala Harris. China's foreign minister will be delivering a video address. And additionally, a large number of participants from outside Europe are expected to make their contribution.

Russia to stay away?

President Vladimir Putin was invited but Wolfgang Ischinger said, the Russian leader let it be known that he does not intend to be in Munich. Speculation has now shifted to the question of whether Russia's foreign minister, Sergey Lavrov, would attend. But it seems as though this won't be decided until the last moment.

Ischinger is, however, optimistic that the Russian government would not choose to miss out on the opportunity "to elucidate the factors that late last year prompted the Russian Federation to table the non-negotiable demands that have been the subject of such intensive negotiations in recent weeks."

In fact, no Russian officials would participate in the security conference for "various reasons," a Russian Foreign Ministry spokeswoman made clear at a press conference last Wednesday.

As a diplomat, Ischinger could be called a professional optimist. And so, even on Monday, he had not given up hope "that we will not only be able to talk about Russia, but also with Russia" this weekend in Munich. He was also "interested at this moment in having a Russian spokesman in Munich and discussing the current situation with him."

Perhaps, however, the Russian cancellation will remain in place. That would be a missed opportunity to talk. And it would call into question the fulfillment of Wolfgang Ischinger's great wish for the last security conference he is to chair: That "at least a few impulses could be set to lead the Ukraine crisis to a diplomatic détente."

In this context, Ischinger has issued a very personal wish: "That this final staging of the MSC under my stewardship will at least include a few impulses leading to some sort of diplomatic easing of the so-called Ukraine crisis."

This article was originally written in German and was updated on February 14.