NATO's Jens Stoltenberg urges Russia to 'step back from the brink'

NATO chief Jens Stoltenberg said there was still time for Russia to change course, while the EU's Ursula von der Leyen accused Moscow of a "blatant attempt to overwrite the rules of the international order" in Ukraine. 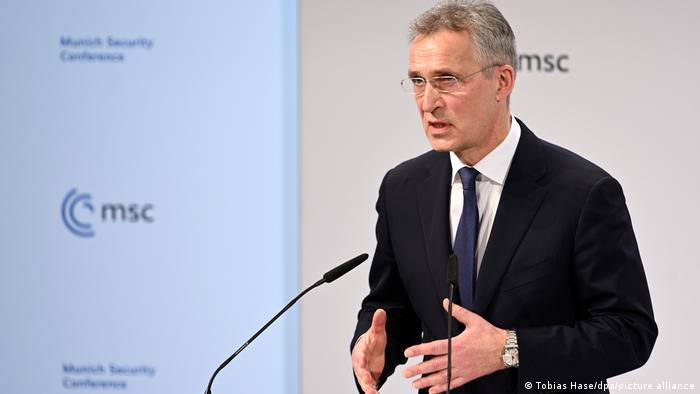 "It is not too late for Russia to change course, to step back from the brink, stop preparing for war and start working for a peaceful resolution," he said at the Munich Security Conference.

Stoltenberg noted that the "risk for conflict is real," with Russia amassing forces at the Ukrainian border. Russia has repeatedly denied that it has plans to attack its neighbor.

Stoltenberg: 'It is not too late for Russia to change course'

In his speech, Stoltenberg said that the West would "always do what is necessary to protect and defend each other."

"Moscow is attempting to roll back history and recreate its spheres of influence," according to Stoltenberg.

"So if the Kremlin aims to have less NATO on its borders, it will only get more NATO" in case of a war in Ukraine, said the NATO chief.

He also slammed Chinese support for Moscow in its dispute with NATO, as the US-dominated alliance remains wary of geopolitical ties between Beijing and Moscow.

EU Commission president: 'We still hope that diplomacy has not spoken its last word'

"We face a blatant attempt to overwrite the rules of the international order," von der Leyen said. "This is what the Kremlin policies mean in practice: to install fear and call it 'security demands'."

"We can impose high costs and severe consequences on Moscow's economic interests. The Kremlin's strange thinking that comes straight out of a dark past may cost Russia a prosperous future," said the EU's top official.

The EU Commission leader also emphasized the need for the bloc to diversify its sources of energy.

"A strong European Union cannot be so reliant on an energy supplier that is threatens to start a war on our continent," she said in Munich.

According to von der Leyen, the EU would get through winter even if Russia cuts off gas to the continent.

She also said that the world has watched the Russian military buildup with "disbelief."

"We will hope still that peace will prevail and that diplomacy will take us there," she added.