Miniature gallows for Angela Merkel allowed to go on sale in Germany | Germany | News and in-depth reporting from Berlin and beyond | DW | 06.12.2017

Saxony state prosecutors have attracted anger after ruling that a gallows "reserved for Angela Merkel" could be put on sale, because it was art. Legal experts say the decision betrays a failure of the rule of law. 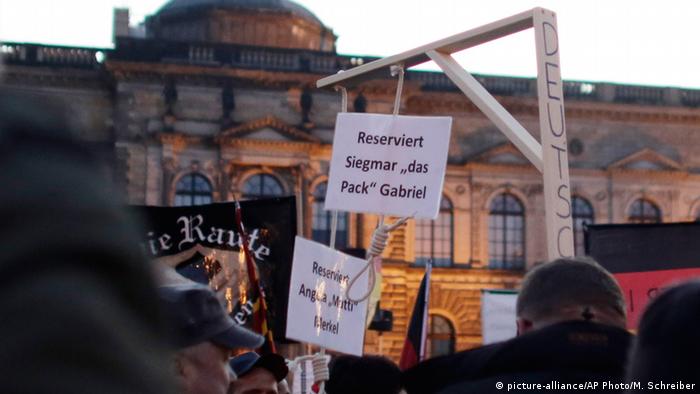 State prosecutors in the Saxony city of Chemnitz confirmed on Wednesday that they had dropped an investigation into a social club that was selling a miniature gallows with notes attached to it reading "Reserved for Angela 'Mummy' Merkel" and "Reserved for Sigmar 'the mob' Gabriel." Merkel is Germany's chancellor, while Gabriel is Germany's vice-chancellor and current foreign minister.

The gallows was first spotted in October 2015 at a demo in Dresdenby the anti-Islam movement PEGIDA, though the investigators were looking into accusations that a "patriotic" social club in Niederdorf, a small town near Chemnitz, wanted to make and sell replicas of the gallows for €15 ($18).

The prosecutors released a statement on Wednesday saying the gallows did not constitute a "call to commit a crime," since the gallows were only to be sold in the club, and offered to a small number of people.

Not only that, the gallows should not be understood literally, but only as "symbolically wishing the politicians named a political death," the prosecutors said, before adding that the words "Mummy" and "mob" indicated that the death threats were not serious, and that therefore the gallows should be considered art. 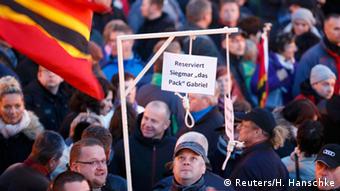 The gallows were called 'legendary' by the far-right social club

Not really a death threat?

Berlin lawyer Christian Schertz, who specializes in personal rights law, was outraged at the ruling, describing it as failure of the rule of law in Saxony.

"It's part of a series of wrong decisions," he told DW. "It started when these gallows were carried around in that demonstration. The police should have intervened, and identified the perpetrator. Of course it is hate speech, but in any case it is libel as well. I mean, there couldn't be a worse insult than threatening to kill someone."

Anti-racism campaigners Gesicht Zeigen! (Show your face!) said that the prosecutors' decision was a particularly poor signal given that it came just a week after a mayor in the small western town of Altena was stabbed in the neck for a supposedly liberal refugee policy.  "We view the ruling with … outrage," wrote the organization's director Rebecca Weis in a statement. "It has been proven that in 2016 politicians were victims of right-wing violence significantly more frequently. Government statistics show that last year there were more than 700 cases of right-wing criminality against people in public offices."

The Niederdorf social club, which says it has 83 members, did not respond to a DW request for comment, but told the Tagesspiegel newspaper that the gallows they had was made by Jens Döbel, the same man who had held up the gallows at the PEGIDA demo in 2015. Döbel has been identified as a far-right extremist by Germany's domestic intelligence agency, the Office for the Protection of the Constitution (BfV). The club underlined that he was not a member, though it has itself faced accusations of far-right extremism by the agency.

In a post on its website on Wednesday, the club said that, because of "all the excitement around this artwork" it was now offering replicas of the gallows on its online "Patriots' Shop" for €18,95 (with Döbel's agreement), which was to include a €5 donation to the local homeless population. 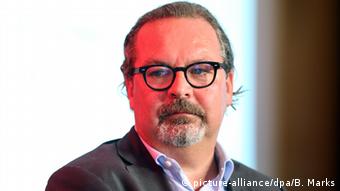 Schertz said the state had failed in Saxony

Schertz believed that Saxony authorities had been much too lax in dealing with hate speech and PEGIDA demos. The lawyer said police had also failed to intervene at an unregistered protest in Dresden last year, when a "mob" verbally abused the chancellor and then-German President Joachim Gauck "in the most sickening terms."

"The police did nothing. Nothing," he said. "And that shows once again a complete misunderstanding of when the state really has to intervene. If such people aren't stopped they will keep doing it. It seems that the rule of law has completely failed in Saxony."

Earlier this year, the German satirical magazine Titanic received a legal threat when it posted an image of the right-wing winner of the Austrian election Sebastian Kurz with a rifle's sight over his chest and the caption, "Finally possible: Killing Baby-Hitler."

But Schertz, who represented the German comedian Jan Böhmermann in a high-profile satirical libel case, said that was different. "Sometimes Titanic certainly crosses the boundaries of satire, but in the case of the gallows this isn't a satirist or an artist — this is someone doing merchandising," he said. "The freedom of satire doesn't even enter into it."

In another case in March 2016, a court in Leipzig made a distinction between politicians and private citizens, when a Facebook user was fined €1,500 for saying that the wife of a mayor should be "stuffed in a sack and thrown in [the river] Weisse Elster." The court argued that the case did not have a political justification — though it would have done if the mayor himself was the object of the comment.

Schertz said this was wrong, too. "A person is protected by a right to dignity, regardless of their job," he argued. "Of course Ms. Merkel and Mr. Gabriel have a right to their dignity — why should a politician have to accept someone publicly calling for their execution? And to minimize that is a failure of the state."

Rain and technical issues dampened a demonstration in Dresden to mark the third anniversary of the anti-Islam movement PEGIDA. Thousands of others held a counter-demonstration "for a Dresden without racism." (29.10.2017)