Rain and technical issues dampened a demonstration in Dresden to mark the third anniversary of the anti-Islam movement PEGIDA. Thousands of others held a counter-demonstration "for a Dresden without racism." 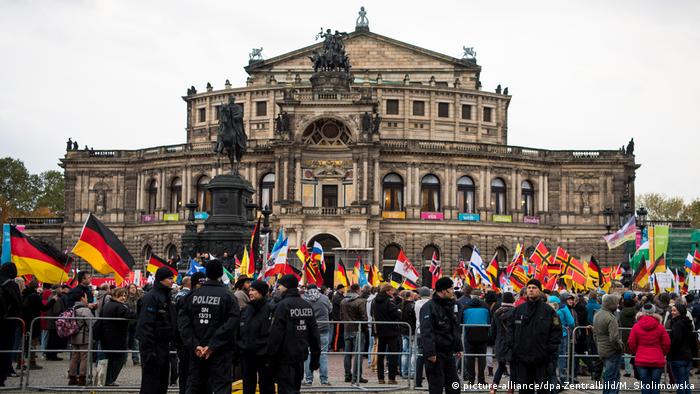 Around 3,000 people in the eastern German city of Dresden protested against xenophobia and racism on Saturday as members of the anti-Islam PEGIDA movement attempted to celebrate the group's third anniversary.

Technical problems and a cold, October shower dampened and delayed PEGIDA's main rally in the city's Theaterplatz by an hour.

Several newly elected, far-right Alternative for Germany (AfD) parliamentarians also spoke at the rally. Saxony MP Heiko Hessenkemper told the crowd that the AfD would "fight for the end of the plunder and extinction of Germany."

The AfD garnered around 27 percent of the vote in the eastern state of Saxony during Germany's national elections in September, beating Angela Merkel's Christian Democrats (CDU).

An estimated 3,000 people in total took part in the PEGIDA demonstration, marking three years since the anti-immigrant movement began its regular rallies to protest against immigration, refugees and Islam. PEGIDA is the acronym for People Against the Islamization of the West.

Read more: How artists in east Germany fight the rise of the far right 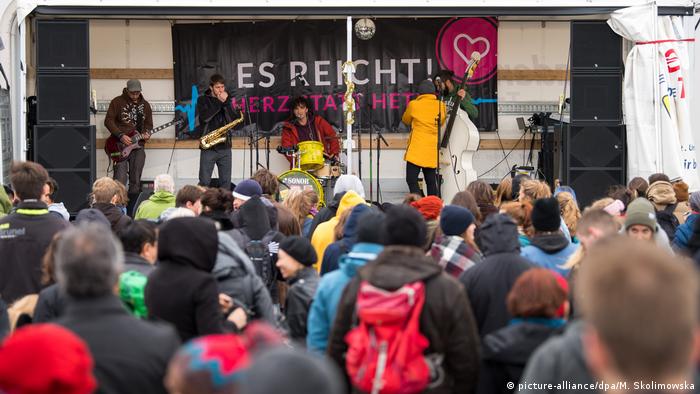 'It's enough!' reads a sign behind a band playing for a crowd of anti-PEGIDA demonstrators in Dresden

Thousands of people in Dresden also turned out on the streets on the stormy Saturday to demonstrate against the PEGIDA anniversary, holding prayers for peace in the city's famous Frauenkirche.

Marching under the banner "for a Dresden without racism," the counter-demonstrators took part in a rally against racism, xenophobia and "incitement."

"It is important to show where the red lines are — where disinhibition is no longer tolerable," Dresden Mayor Dirk Hilbert told the protesters.

Around 600 police officers were on duty to prevent any clashes between the two groups, but officials said the protests remained peaceful.

Dresden Police Commissioner Horst Kretzschmar said it was "the calmest operation" police had seen at a PEGIDA anniversary. Significantly fewer emergency services were needed than in the prior two years.

Read more: Berlin and beyond: Of PEGIDA and toilet design

PEGIDA, short for "Patriotic Europeans Against the Islamization of the West," began its regular marches in Dresden on October 20, 2014.

At its height in February 2015, some 20,000 flooded the streets of Dresden, with counter-protests that were often at least the same size.