Gallows at PEGIDA demo under investigation by Dresden prosecutors

Prosecutors in Dresden are investigating a hand-made gallows with signs "reserving" places for German Chancellor Merkel and her deputy, Sigmar Gabriel. The gallows was spotted during a PEGIDA demonstration. 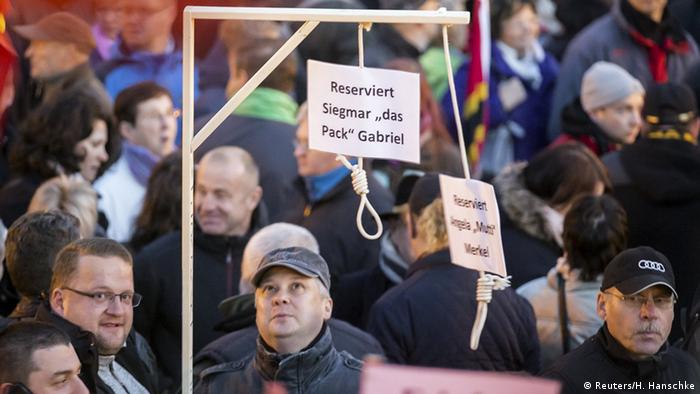 A statement released by the Dresden public prosecutor on Tuesday said an investigation had been launched against an unknown participant in the PEGIDA march who held up the small-scale gallows. The home-made construction featured two nooses and signs reading "reserved," "Angela Merkel" and "Sigmar Gabriel." Gabriel's first name was misspelled "Siegmar" on the sign.

The charges being investigated are disturbing the peace and public incitement to commit a crime. Police are attempting to identify the person holding the gallows using pictures taken during the demonstration.

PEGIDA - the German acronym for "Patriotic Europeans against the Islamization of the West" - regularly stages demonstrations against Merkel. Her policy of welcoming refugees into Germany has drawn particular ire from the anti-migrant group. The demonstration on Monday drew between 7,000 and 9,000 people.

Germany's Family Minister Manuela Schwesig posted on Twitter Monday night that displaying a gallows "just wasn't right" and asked if the participants were really the "concerned citizens" they claimed to be.

Heiko Maas, Germany's Justice Minister, said "people who do that don't belong on the street, they belong in front of a judge."

The German government's Commissioner for Human Rights Policy, Christoph Strässer, told the AFP news agency that displaying the gallows amounted to a "call for violence" and that the limits of the freedom of opinion and demonstration had been exceeded.

Strässer took part in a Council of Europe conference in Strasbourg on Tuesday that dealt with freedom of expression and the question of how much this right could be restricted in a democracy - by banning hate speech, for example.

Several posts on the PEGIDA Facebook page alluded to the gallows incident, pointing out that posters hung across Dresden by PEGIDA opponents showed a fist punching the group's founder, Lutz Bachmann. PEGIDA also accused the media of blowing the gallows issue out of proportion, saying it could pass as tasteless but acceptable satire.