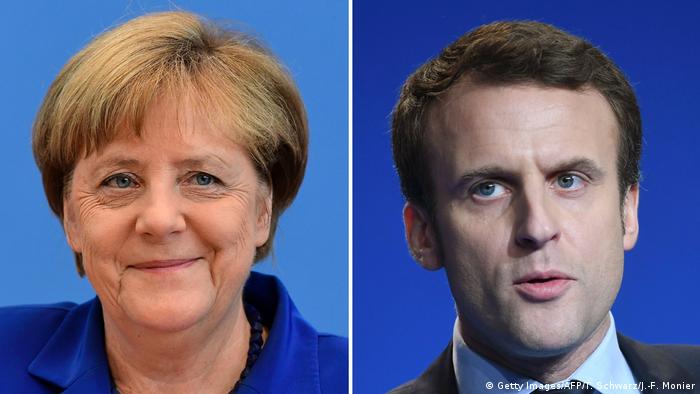 A range of new programs designed to bolster the European Union will be at the top of the agenda on Monday, when the two leaders meet. Merkel has already publicly backed Macron's call for a new European investment program to boost growth within the bloc.

"We are happy to think about joint investment programs because Germany also needs to catch up in the digital field," Merkel told a media function Thursday while on the campaign trail in North Rhine-Westphalia, where state elections are being held this weekend. The vote on Sunday in Germany's most populous state is widely considered to be a litmus test for September's federal elections.

Another notion is the creation of an additional parliament for the EU's 19 eurozone members. Finance Minister Wolfgang Schäuble on Thursday affirmed that both he and Macron were in favor of setting up a eurozone parliament, "made up of European parliamentarians, which would have consultative powers."

While it is tradition for incoming French presidents to make their first foreign trip to Germany, Macron and Merkel's appears to have already formed a foundation. The German chancellor "was the first among foreign leaders to call him, given the importance of the relations between our two countries in restarting the European project," according to a Macron aid.

"There is a wish to work together on several priorities: security, economy and investments as well as (social) protection."

Macron met with Merkel and German Foreign Minister Sigmar Gabriel in March while campaigning. Macron praised the German chancellor, saying the two had discussed issues such as establishing a European defense union and combating terrorism.

Gabriel, meanwhile, told the 39-year-old En Marche! leader: "From what I can see, you are the only presidential candidate in France who is driving a clear and unambiguous course for Europe."

'Solid and balanced accord'

Meanwhile, Macron managed to pull conservative parliamentarians to his cause along with French centrist Francois Bayrou's Modem Party.

Bayrou said that officials from Macron's movement-turned-political party Republic on the Move (REM) and the Modem Party reached a "solid and balanced accord" in the lead up to France's parliamentary elections slated for June.

Macron has vowed to embolden his vision for France's future by bringing fresh candidates for the French parliament.

The French president-elect was voted in on the back of plans to deepen EU integration and introduce economic reforms aimed at making France's ailing economy more competitive and less burdensome for businesses.

The French economy has for years found itself stuck in a rut, with the International Monetary Fund projecting it to be among the EU's slowest economies this year.

Unemployment currently stands at 10 percent, which is higher than the EU average and more than double the level in Germany or the UK, the EU's two other major economies.

The unemployment rate is even worse among young people, with almost one-quarter of French youths out of work.

Merkel said Thursday that she respected the major task facing Macron in boosting France' economy and overcoming the sense of political malaise that has gripped the country.

France is facing a second and final round in its presidential election. The winner has the daunting task of reviewing policy on Africa as the former colonies still play a significant role in French national life. (05.05.2017)

Made in Germany - French Election - A win for Europe?