Joe Biden speaks to leaders of Germany, France and Britain 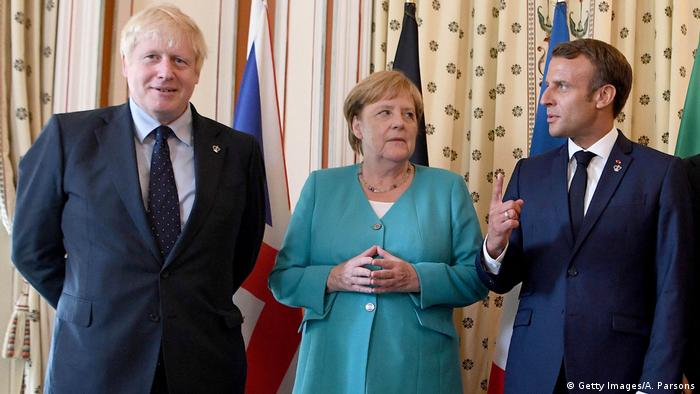 The office of Chancellor Angela Merkel on Tuesday said she had congratulated US President-elect Joe Biden and Vice President-designate Kamala Harris on their election victory in a phone call.

Merkel's spokesman Steffen Seibert said the pair had spoken about the importance of the trans-Atlantic partnership.

In the call, Seibert said, Merkel "voiced her wish for a close and trustworthy cooperation."

"The chancellor and the president-elect were in agreement that trans-Atlantic cooperation is of great importance given the numerous global challenges," he said.

Merkel had already said she would cooperate closely with the president-elect in a congratulation message on Monday. The tone was markedly different from the chancellor 's communication to President Donald Trump after his election win in 2016. In that, she appeared to deliver a lecture over the need to respect democratic values.

Many European leaders have voiced similar hopes that relations with the US can be repaired under a Biden administration, after four years of often testy ties with Europe and Germany under Trump.

There had been speculation on both sides of the Atlantic about how smooth the relationship between Biden and Johnson would be, given the UK prime minister's affinity with Trump, the Irish-American Biden's thoughts on Brexit, and Johnson's troubled personal history with Barack Obama during the Brexit referendum campaign.

However, Johnson was among the first world leaders to congratulate Biden on his election victory. Downing Street said that during the wide-ranging call Johnson "warmly congratulated" Biden.

"I look forward to strengthening the partnership between our countries and to working with him on our shared priorities — from tackling climate change, to promoting democracy and building back better from the pandemic,'' Johnson tweeted after the call.

Macron's office said that the French leader told Biden he was ready to cooperate on climate, health, and the fight against terrorism.

"We'll have a lot to do together to promote shared priorities - climate, global health, international security - and effective multilateral action," Macron said.

Many of Europe's leaders watched with shock as Trump took the US out of the Paris climate change agreement, put tariffs on EU goods and undermined multilateral bodies that America had supported for decades.

Read more:  Opinion: Why Putin is in no hurry to congratulate Biden

European Commission President Ursula von der Leyen on Tuesday said Europe should take the initiative in offering to work with the next US administration. She said that did not necessarily mean returning to the agenda of five years ago.

"Our alliance is based on shared values and history. On a common belief in working together to build a stronger, more peaceful and more prosperous world," von der Leyen said in a speech to EU ambassadors around the world.

"These goals will always endure. But in a changing global landscape, I believe it is time for a new trans-Atlantic agenda fit for today's world."

An EU official said the 27 national leaders of the bloc would soon discuss "reenergizing the trans-Atlantic relations" and "reinforcing political dialogue" with Biden.

US President-elect Joe Biden has announced a 13-member task force to develop his incoming administration's response to the COVID-19 pandemic. The country's total coronavirus infections have surpassed 10 million.

The Senate majority leader said Donald Trump is "100% within his rights" to challenge the results of the election. Attorney General William Barr later authorized prosecutors to pursue "substantial allegations."