Japan seeks German help to counter China′s clout in Indo-Pacific | Asia| An in-depth look at news from across the continent | DW | 14.04.2021

This week's "two-plus-two" meeting of ministers could the stage for closer cooperation on regional security. However, Germany needs to balance its interests between China and Japan. 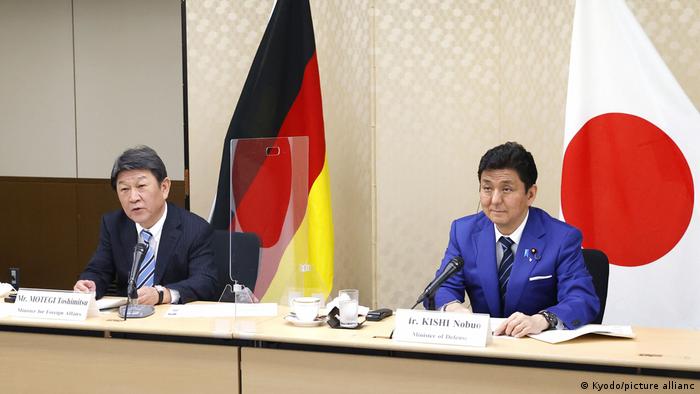 The discussions covered a number of challenges in the Indo-Pacific region, but the key focus was putting together a united front to confront Beijing's territorial ambitions.

Tokyo is particularly concerned by Beijing's maritime claims in the East China Sea, where both sides have a long-running territorial dispute over a chain of uninhabited islands.

Chinese forces have also occupied and militarized atolls and reefs in the South China Sea, and the country continues to claim most of the waters in defiance of international law.

Most worryingly, Beijing has dramatically stepped up pressure on Taiwan, which the goverment insists is a renegade province that will be reincorporated into greater China sooner or later, — and by force if necessary.

What does Japan want from Germany?

Jun Okumura, an analyst at the Meiji Institute for Global Affairs, told DW that Tokyo is keen to build "any kind of new alliance that will help to face down China."

During Tuesday's meeting, Japan again requested that a German warship, scheduled for an Asia voyage this summer, participate in joint military exercises.

"British naval units have been out to the Pacific a number of times in recent years and are due to return again later this year, while the French have also been in the region and are presently taking part in naval exercises in the Indian Ocean," Okumura said.

"Any kind of bilateral alliance or relationship that Japan can forge with Germany will be welcome, while there is also a desire to make Germany slightly less economically reliant on China," Okumura said, adding that under Chancellor Angela Merkel, Germany has become "the most pro-China member of the G-7."

Although the burgeoning relationship between Germany and Japan may not take the form of a formal security alliance, it could offer an important additional layer of cooperation that serves to complement the Quadrilateral Security Dialogue, or the Quad, which brings together the US, Japan, Australia and India.

"Under Merkel, Germany has certainly tightened its economic relations with China, but both Germany and Europe more generally are also thinking about how to better engage in the Indo-Pacific," said Stephen Nagy, an associate professor of international relations at Tokyo's International Christian University.

Berlin recently released policy guidelines for the Indo-Pacific, which it sees as an opportunity for economic growth, Nagy told DW, but the German government has reiterated that it is committed to the rule of law and openness.

"I think that Germany is worried about the drastic shift that we have seen in China under Xi Jinping over the last five years and which has been accelerated in the last 12 months or so," Nagy added.

In a statement given after discussions with his Japanese counterpart, Foreign Minister Maas said Germany and the European Union should "strengthen our engagement in Asia ... where important global decisions for the future will be made in this century."

"If we do not become more active, others will write the rulebook of the future, not only in economic, but also in political and security policy terms," the statement added.

Maas said Japan was a "key partner" in promoting multiculturalism, the rule of law and human rights.

Neither the statement from Maas nor from Kramp-Karrenbauer made mention of China.

Nagy said that if a German warship were to take part in exercises with units of Japan's Self-Defense Forces, then there may very well be a backlash from Beijing.

"China is going to be upset and, if past performance is an indicator, will accuse Japan of attempting to form an 'anti-China clique' and of having a 'new Cold War mentality,'" he said.

"They will also criticize Germany, couching their comments to say that Berlin is now being 'directed by the US and the Biden administration' or something similar," he added.

The real test for the German warship will come after it has completed its visit to Japan and is making its return journey, Nagy said.

The plan, at present, is for the vessel to carry out a freedom of navigation transit of waters around the islands in the South China Sea that have been occupied by the Chinese military and are now claimed by Beijing as sovereign Chinese territory.

Cost of conflict in South China Sea 'too high'

EU-Japan take on China's BRI with own Silk Road

The EU and Japan have signed an infrastructure deal to boost connectivity between Europe and Asia. The pact is being described as the EU and Japan's riposte to China's Belt and Road Initiative (BRI).

Next-generation fighter jets and new missile systems are high on the agenda as Japan seeks to counter potential threats from China and North Korea.