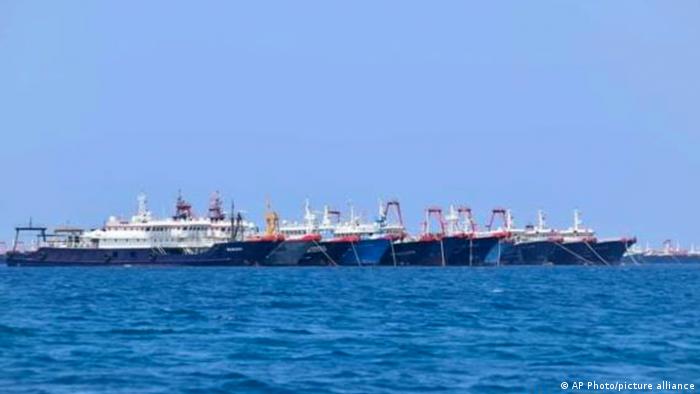 On Sunday, the Philippine defense chief demanded that more than 200 Chinese vessels he said were manned by militias leave a South China Sea reef claimed by both Manila and Beijing.

"We call on the Chinese to stop this incursion and immediately recall these boats violating our maritime rights and encroaching into our sovereign territory,'' Defense Secretary Delfin Lorenzana said in a statement.

He warned that the Philippines would uphold its sovereign rights.

Chinese Embassy officials did not immediately issue any comment.

Chinese fishing fleets have long been suspected of being utilized as maritime militias to help assert Beijing's territorial claims, although China has played down those claims.

What was seen at the reef?

A Philippines government body that oversees the disputed area said the vessels were seen moored at Whitsun Reef, which Manila calls Julian Felipe, on March 7.

The National Task Force for the West Philippine Sea released pictures of the vessels, alleged to be manned by maritime military personnel, lying side by side in formation.

"Despite clear weather at the time, the Chinese vessels massed at the reef showed no actual fishing activities and had their full white lights turned on during night-time," the task force said in a statement.

The presence of the boats was "a concern due to the possible overfishing and destruction of the marine environment, as well as risks to safety of navigation," it added. 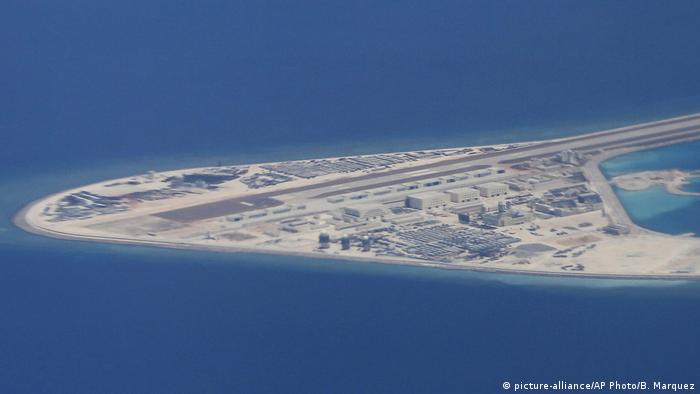 Why is there a dispute over the reef?

The Whitsun Reef is a boomerang-shaped, shallow coral region that lies some 175 nautical miles (324 kilometers) west of the western Philippine province of Palawan.

According to the Philippines, the reef — which lies amid the Spratly Islands archipelago — is located well within its own exclusive economic zone.

China does not recognize a 2016 international ruling that invalidates its historic claims to virtually the entire sea. Also, the decision did not specify which areas fishermen from China and other countries could be allowed to fish in.

Taiwan, Malaysia, Vietnam, the Philippines and Brunei all claim parts of the sea. In recent years, China has built islands in the disputed waters, installing airstrips on some of them.

The US has repeatedly condemned what it called China's attempts to bully neighbors with competing claims. Beijing, on the other hand, has criticized Washington for what it alleges is interference in its internal affairs.

How has Duterte handled China's claims?

He has been criticized for not standing up to China's perceived aggressive behavior and not seeking Chinese compliance with the international arbitration ruling.

"If I send my marines to drive away the Chinese fishermen, I guarantee you not one of them will come home alive,'' Duterte warned.

Duterte has meanwhile sought infrastructure funds, trade and investments from China, which has also donated and pledged more COVID-19 vaccines to the Philippines as the country faces an alarming rise in coronavirus infections.

The US said the sanctions were a response to China's increased naval activity in the region. The move comes just days before Joe Biden is set to take over as US president.

US Secretary of State Mike Pompeo is on a tour to forge new alliances in Asia, with Indonesia high on his list. Washington, which is increasingly at odds with Beijing on regional issues, aims to build new bridges.

President Xi Jinping has signed 29 bilateral deals with the Philippines on his landmark visit to Manila. But experts say his main agenda was to forge cooperation on the disputed South China Sea. Ana P. Santos reports.