How the Cold War shaped the Berlinale 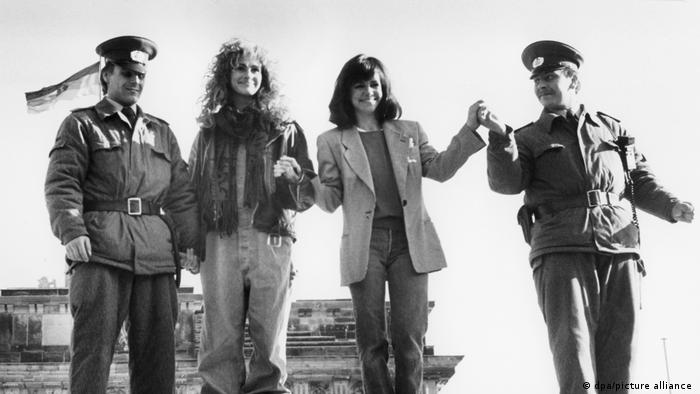 Instead of taking place as usual in February this year, the Berlinale's public event was pushed to June. Even though the decision was due to the pandemic, it is in ways a return to tradition: Before being moved to the winter months in the 1970s, the film festival was a summer affair.

Showcasing the glamour of the free world

The very first Berlin International Festival kicked off 70 years ago, on June 6, 1951, with a screening of Alfred Hitchcock's Rebecca at the Titania-Palast cinema. Even though the film was from 1940, it was a celebratory premiere for the Germans, who enthusiastically welcomed the film's lead star, Joan Fontaine.

At the time, the city destroyed during World War II was still in rubble, and divided Berlin was at the front line of the Cold War.

West Berlin's physical isolation from the rest of the Federal Republic of Germany was most evident during the Soviets' blockade of the enclave city; from June 1948 to May 1949, the Western Allies compensated by sending supplies to West Berliners by plane in what was known as the Luftbrücke, or air bridge.

Lining up for the Berlinale's inaugural night in June 1951

In this context, the new film festival not only aimed to bring in a bit of glitz to the West German city, but to serve as a "showcase of the free world" in a city located within the borders of East Germany.

The founding director's 'concealed' Nazi past

Among the people who initiated the project was the US military administration's film officer, Oscar Martay (1922-1995), and jurist and film historian Alfred Bauer (1911-1986) — who went on to serve as the director of the festival for a large part of the Cold War years, from 1951 to 1976.

As German weekly Die Zeit uncovered in 2020, Bauer had actually been a high-ranking film official under the Nazis who worked to legitimize the regime.

An ensuing study found that Bauer had managed to convince interrogators during the post-war denazification process that he had nevertheless always been a staunch democrat and Nazi opponent. He claimed that he only kept working in the Nazi bureaucracy "to prevent worse things from happening to German cinema."

According to the study, Bauer had joined various National Socialist organizations as early as 1933. In any case, he apparently aligned just as quickly with the Cold War propaganda pushed by the Western Allies.

An embargo on Soviet films

That included boycotting all films from so-called Eastern bloc states, a principle determined from the start by the film festival's advisory board. The stance continued throughout the 1960s, despite unofficial rapprochement attempts — which were however dismissed by the Eastern European countries.

The first year a Soviet film was screened as part of the festival's official program was in 1974. A year later, many other socialist states also took part in the Berlinale, including, for the first time, films produced by the East German state film company, DEFA.

"The story of the socialist states' absence from the Berlinale," wrote Wolfgang Jacobsen in 50 Years of Berlinale, "is a substantial chapter in the history of East-West tension; a Cold War tragicomedy, a drama with shifting roles and changing protagonists."

At the center of geopolitical tensions

Cold War tensions unfolding in the city were inevitably played out in the Berlin Film Festival.

The third Berlinale began on June 18, 1953, just a day after the violent suppression of the workers' uprising in communist East Germany. The boundary sectors were closed and the audience was notably smaller.

Meanwhile, West Berlin did not quite know how to react when one of the top guest stars of the festival that year, Gary Cooper, criticized McCarthy's communist-hunting investigations in the US. 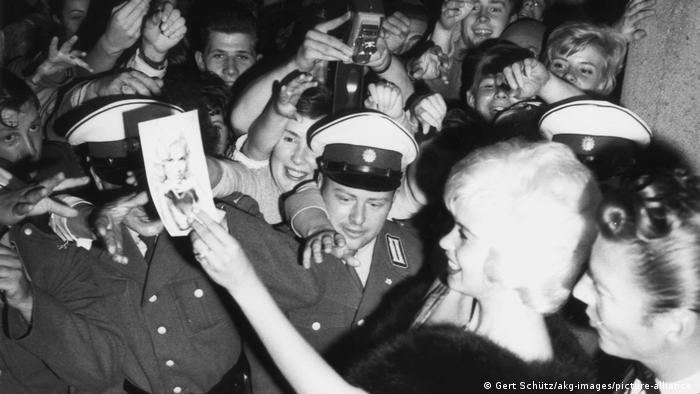 Hollywood stars such as Jayne Mansfield in 1961 drew enthusiastic crowds

By its fifth year, with a boosted publicity budget, posters advertising the film festival were prominently placed near the border to East Berlin.

However, East German visitors could no longer freely join the screenings from 1962, the Berlin Wall erected in August the previous year having finalized the division of the city.

The Berlinale organizers nevertheless attempted to keep in touch with the East Berlin residents, setting up a so-called "TV Bridge" for the 1963 festival that transmitted part of the program onto screens across the Wall.

But the festival's arguably most important political scandal was not triggered by events in Berlin, but was linked to one of the Cold War proxy conflicts, the Vietnam War.

In 1970, the competition included the West German anti-war film O.K., directed by Michael Verhoeven, which told the story of a Vietnamese girl who is raped and killed by four US soldiers.

The president of the jury that year was director and cinematographer George Stevens, who as a US soldier during World War II had participated in the liberation of the Dachau concentration camp.

He refused to have a German accusing Americans of war crimes in the competition — but not all jury members agreed with him. The jury disbanded and the competition ended without any awards given out that year. It was initially unclear if the festival would ever happen again. 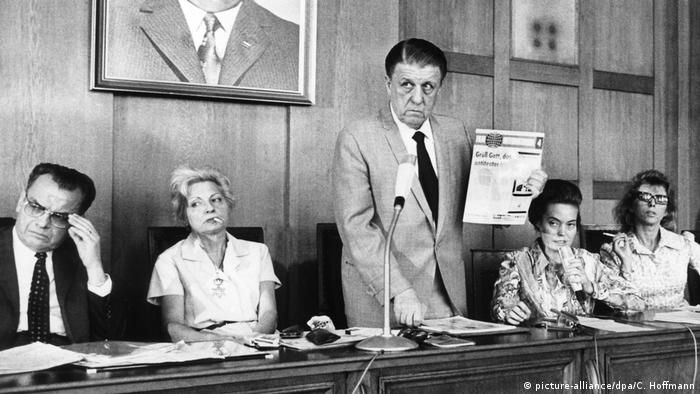 Similarly, another Vietnam War film caused protest from the Soviets in 1979, who deemed the film Deer Hunter, by US director Michael Cimino, to be an "insult to the Vietnamese people."

Communist states dropped out of the festival. Despite the walk-outs of the Cubans, East Germans, Hungarians, Bulgarians, Poles and Czechoslovakians, and the resignation of two jury members, the festival managed to continue. Mediation was required to convince the Eastern bloc countries to return to the festival the following year.

The unpredicted fall of the Berlin Wall

A decade later, on November 9, 1989, then Berlinale director Moritz de Hadeln proposed to the East German Film Bureau that the festival program be screened simultaneously in East and West Berlin.

On the evening of that same day, a GDR press conference infamously led to the fall of the Berlin Wall.

The 1990 Berlinale was held in both parts of the city — a symbolic event that however required elaborate organization as separate authorities still ruled newly unified Berlin.

Even after having survived the challenges of Cold War diplomacy, the Berlinale has proudly preserved its reputation for being the most "political" of the major European film festivals.

In the past 20 years, the Golden Bear was awarded three times to Iranian filmmakers facing censorship or persecution in their home countries; while amid the European migrant crisis, the top award went to Fire at Sea, a documentary on the dangerous crossing of the Mediterranean by refugees to reach Europe.

The Berlin International Film Festival has always been a political stage for filmmakers, and the 69th edition is no exception. Three entries stand out, even though they are out of competition.

The Berlinale's winner will grab headlines for being a "Romanian sex-tape movie." But Radu Jude's work lives up to Berlin's political reputation, says DW's Elizabeth Grenier.

Documentary highlights at the Berlinale

Beyond prizes given in different sections, the Berlinale now also has a distinct award recognizing a documentary film.