Berlin Airlift 70 years on: When occupiers became protectors | Germany | News and in-depth reporting from Berlin and beyond | DW | 24.06.2018

Seventy years ago, the Soviet Union blockaded all supply routes to West Berlin. In the city's time of need, the Western powers embarked on a historic rescue mission: an airlift for its more than 2 million inhabitants. 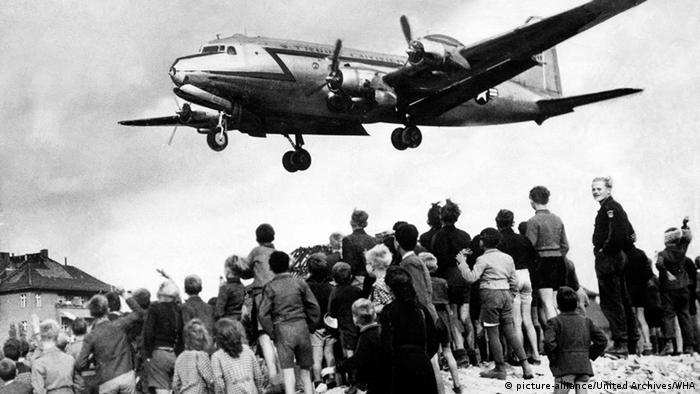 German-American relations have been undergoing a stress test since US President Donald Trump took office. There now seem to be more differences between the two countries than things they have in common. However, their economic, cultural and historical ties are close enough to survive this presidency, too. The strong German-American friendship was cemented by an event that took place 70 years ago.

In the spring of 1948, three years after the end of World War Two, Germany was still in ruins. Millions of people had lost their lives as a result of Adolf Hitler's dream of a thousand-year Nazi Reich and his racist ideology. Those who had survived the war were hoping things would soon begin to improve, but reconstruction efforts were already overshadowed by the start of the Cold War. There was deep mutual mistrust between the Western allies and the Soviet Union, and nowhere were these tensions more apparent than in the divided German capital, Berlin. The western part of the city was governed by the victorious Allied powers, the United States, Britain and France, while the east was under Soviet control. 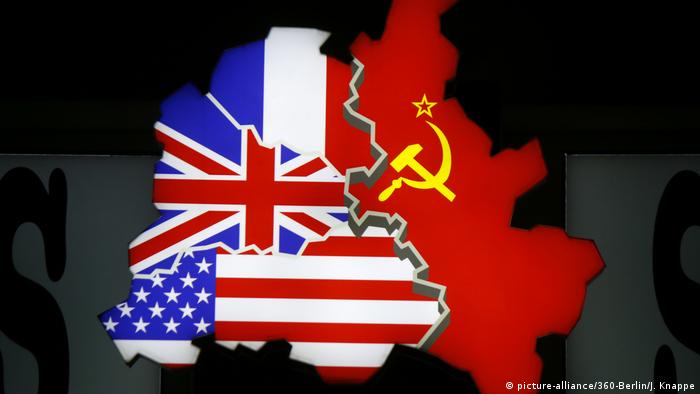 Berlin was divided into sectors administrated by the victorious Allied powers

The 2 million or so people in the Western powers' three sectors lived on a sort of island surrounded by the Soviet sphere of influence. Both East Germany, in the midst of which the city lay, and the rest of Eastern Europe were firmly under Moscow's control. Supplies were brought into West Berlin via a railway link, one motorway and a few waterways, all of which passed through communist territory.

On June 20, 1948, a trial of strength began between West and East when the Allies decided to introduce a monetary union – the genesis of the deutschmark. 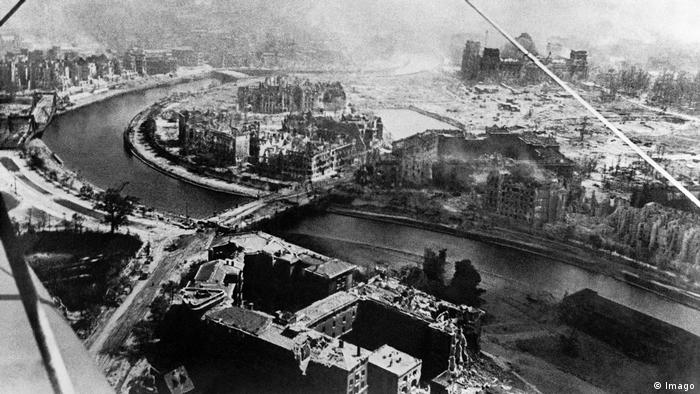 The deutschmark sparks a crisis

The intention was to stabilize Germany economically by introducing a hard currency. But the Soviet Union refused to accept the move, fearing that the introduction of the new currency would cement West Berlin's special status as an Allied bridgehead in the heart of its territory. "This led to a rift between the three Western occupying powers and the Soviet side," Bernd von Kostka of the Allied Museum in Berlin explained to DW. "Monetary union made it impossible to agree a common policy for Germany."

On the night of June 23, the Soviets blockaded all access to the west of the city. Soon the lights went out. Seventy-five percent of West Berlin's electricity came from the surrounding region. The Eastern Bloc's plan was to grind the people down in order to force the Allies out of the divided city.

West Berlin as an outpost of freedom

But the Allies stood their ground – even though the city at stake here was the capital of their former enemy, only recently defeated, who had inflicted death and destruction on large parts of the world. The US saw West Berlin as a bulwark against communism that had to be defended. Because the Allies had not signed any agreement with the Soviet Union about use of the land access routes, they had no legal grounds on which to fight the blockade. A military option was never seriously considered because of the high risks involved.

What the Western powers did have was three guaranteed air corridors. US President Harry S. Truman and the other Allies agreed on a spectacular rescue operation: supplying the city entirely from the air. The plan to implement this massive airlift "was given conditional support. And because there were no alternatives, this provisional airlift – this idea of supplying an unimaginable 2 million people from the air – began," says Bernd von Kostka from the Allied Museum. 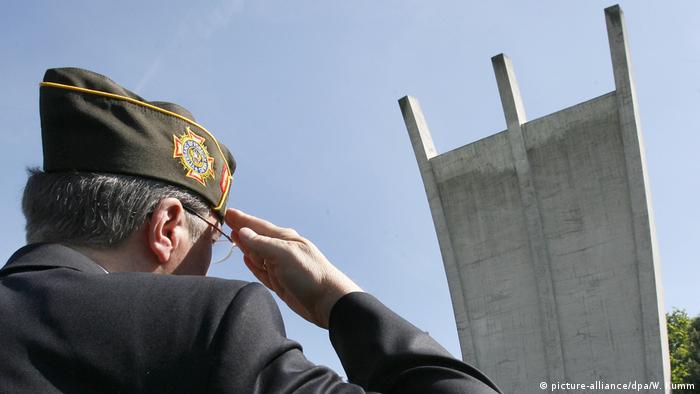 A memorial commemorates the blockade, which ended in May 1949 after almost a year

On June 28, the first US Air Force planes set off from Frankfurt and Wiesbaden for Tempelhof Airport in Berlin. The French, who had suffered the direct consequences of German occupation, took a bit longer before agreeing to support the operation. Soon transporter planes were flying around the clock, taking off and landing at 90-second intervals at Tempelhof Airport in the US sector, Gatow in the British sector, and from December 1948 on at the new French-built airport, Tegel. 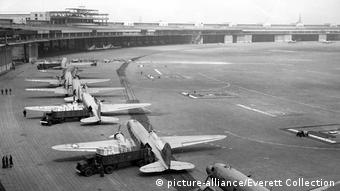 Tempelhof was one airport used as a base for airlift flights

Every day the encircled western sector of Berlin needed an average of at least 5,000 to 6,000 tons of food supplies and coal. The biggest sortie was on April 15 and 16, 1949. In the space of just 24 hours, 1,400 flights delivered around 13,000 tons of freight. The airlift pilots flew around the clock, often exhausted and risking their lives to fly into the city regardless of the weather. Some of the planes crashed. Dubbed "candy bombers" by Berliners, the propeller planes flew so low over the city as they came in to land that the crew and the populace were able to wave to one another. Pilots used to throw down chocolate and chewing gum for the city's children, attached to homemade parachutes.

Read more: The hero of the Berlin Airlift 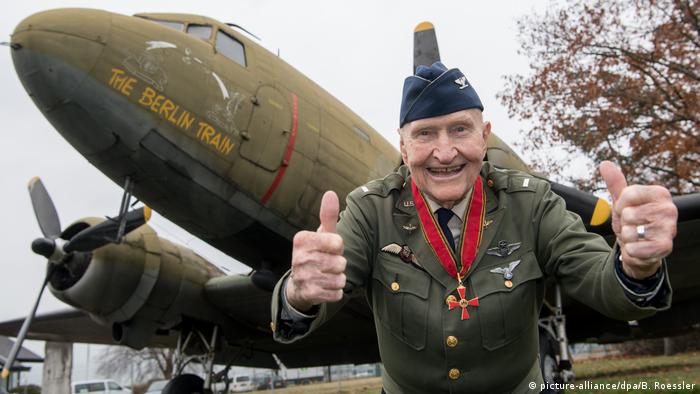 Gail Halvorsen, seen here in 2016 in front of a Frankfurt memorial, had the idea of dropping candy

In addition to the Allies' logistical efforts, the isolated inhabitants' determination to hold out was key to the success of the operation. On the multimedia page of the project "Memory of the Nation [Gedächtnis der Nation]," Walther Hofer describes the situation in winter, when each household had only one hour's electricity per day "because the coal for the electricity plants had to be flown in." Heating homes was out of the question.

On September 9, Ernst Reuter (SPD), the later mayor of West Berlin, gave a historic speech in which he appealed to the Western powers not to forsake Berlin. Against the backdrop of the ruined Reichstag building, Reuter shouted into the microphones: "People of the world, people in America, in England, in France, in Italy: Look at this city and see that you should not, you cannot abandon this city and this people!" 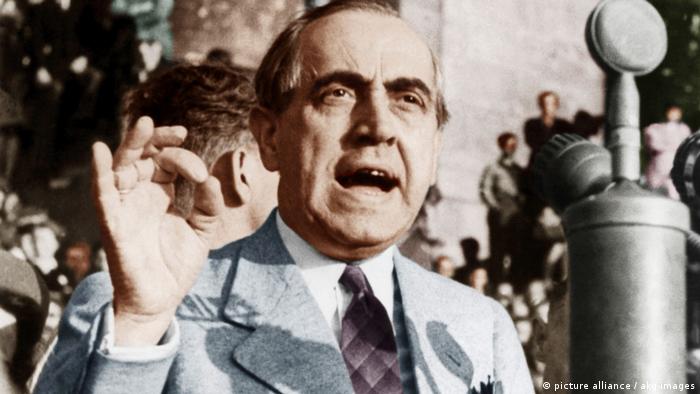 Every day of the airlift increased international sympathy for the Western powers, whereas the Soviets plummeted in the public's esteem. Finally, the Soviet dictator Joseph Stalin realized that this was a power game he was not going to win. On May 12, 1949, he ended the blockade following secret negotiations with the US. In those 318 days, the Allies had flown more than 277,000 flights to West Berlin, bringing in more than 2.3 million tons of supplies.

It was only a small step from the airlift to trans-Atlantic friendship with the United States. Bernd von Kostka hopes that Trump's foreign policy will not do lasting damage to this solidarity. He also sees the airlift as a model for how international cooperation can help in today's crisis and conflict zones – in Syria, for example. "We have seen that it's perfectly possible to supply people from the air. And with the transport capacity of modern freight planes, it would be possible to bring the amount supplied during the airlift to any city in the world in a fraction of the number of flights."