During the Berlin Airlift, one US pilot threw candy from his aeroplane for the kids in West Berlin. Since then, children have honored him for his work. DW met the Candy Bomber. 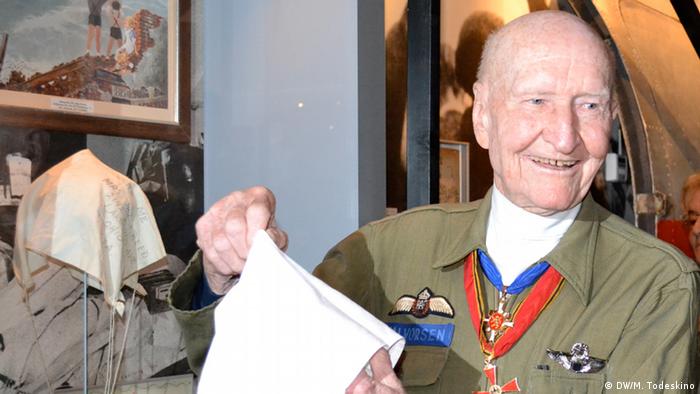 In the summer of 1948, the young American pilot Gail S. Halvorsen ran across the landing strip at Tempelhof airport in West Berlin. Thirty children stood behind the barbed wire fence.

"Gimme chocolate," they asked the 27-year-old. "They weren't begging, they were just asking for chocolate," he remembers. But the pilot only had two pieces of gum in his pocket: "Two! For 30 kids!"

He divided the strips into four pieces and shared them around. To his surprise, there was no jostling: "They were excited just smelling the wrappers and hid them in their hands to take home. That's when I knew I had to do more."

The situation in divided Berlin was tense. Just a few weeks before, the Soviet army had closed off the western half of the city.

Following the introduction of a new currency, the Ostmark, they hoped to force Western powers to retreat.

Trucks, trains and planes were no longer able to enter West Berlin. Around 2.2 million people were cut off from basic services, including the supply of coal and food. 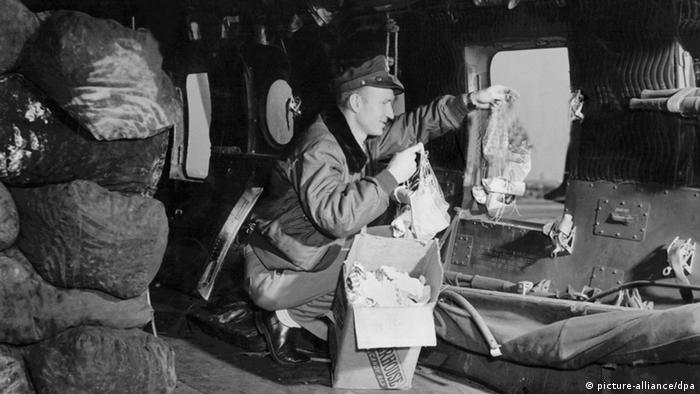 Gail Halvorsen, pictured here in 1948, shows how he delivered the candy 'bombs'

But the Allied forces didn't leave them in the lurch. The Berlin Airlift was to become the biggest aid mission of all time.

On a daily basis, hundreds of American and British airplanes darted through the sky, bringing supplies to Tempelhof airport. They would go down in history as the Candy Bombers.

One of them was Gail Halvorsen, now 92. He undertook countless missions through to the end of the Berlin Blockade in May 1949.

During the encounters with the children, he promised them that he'd return the next time with chocolate. He'd wiggle the wings of the plane before he landed so the kids would recognize him, he told them. 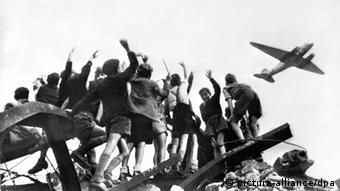 Freedom! Boys in West Berlin celebrate the arrival of the candy bombers

Later, Halvorsen gathered chocolate from his colleagues. "I had two hands full of chocolate," he remembers.

On July 18, 1948, he saw the children at Tempelhof and wiggled his wings as promised.

The chocolate was released from the plane via a chute from which the packages of candy would float down to the ground below on small white parachutes.

The kids ran for the parcels with glee.

From then on, the children called him Uncle Wiggly Wings. The delivery of sweet "bombs" became routine and it wasn't long before the press got wind of the story. 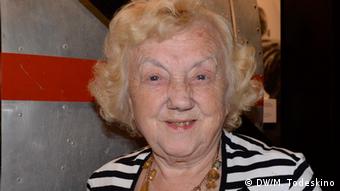 "That was a problem at first. A reporter took photos in which you could see my airplane number," he explains. A big article appeared in the newspaper and Halvorsen was quoted as a commanding officer.

Soon enough, children in the US began raising money to buy chocolate bars for West Berlin and other American pilots began to help too.

By the end of the Berlin Blockade, they'd dispatched 22 tons of candy over the city, but Traute Grier, then 14 years old, didn't get a single piece. She lived in the district of Neukölln.

"When Gail Halvorsen flew over us and threw Hershey's down, all the children rushed to get it. I held myself back. The boys were so pushy," she recalls.

But Grier isn't sad about it. "To this day I still think about the pilots. The courage they mustered up! And they did it all for our freedom."

The airlift was a logistical - and human - show of strength. "In the beginning we flew day and night," Halvorsen says.

The mission wasn't without its dangers: At least 78 people were killed in air collisions. The British and American planes took off and landed in cycles of a matter of minutes.

Ultimately, the Berlin Airlift was a success, and on May 12, 1949, the Soviet Union lifted the blockade. 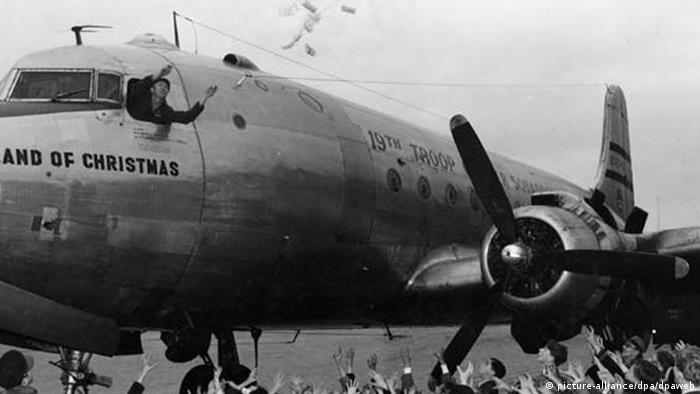 In 1948, Halvorsen threw candy from his C-54 airplane at Tempelhof airport

The Berlin Airlift also brought the Americans and the Germans closer together - something which can still be felt today.

The actions of Gail Halvorsen are symbolic of the transatlantic friendship and when President Barack Obama gave a speech at the Brandenburg Gate in June 2013, he personally addressed the veteran who was seated in the audience.

"It was here that Berliners carved out an island of democracy against the greatest of odds," said Obama. "We are so honored to be joined by Colonel Halvorsen, 92 years old - the original Candy Bomber. We could not be prouder of him." 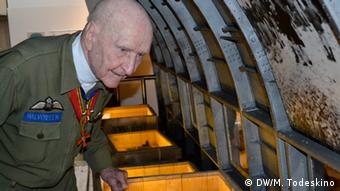 In July 2013, Halvorsen visited the Haus der Geschichte museum in Bonn where the airlift is documented

In 1974, Uncle Wiggly Wings was awarded the German Federal Cross of Merit in Berlin and in June 2013, a secondary school in the capital was named in his honor.

Gail Halvorsen, who now has five children, 24 grandchildren and 41 great-grandchildren, personally attended the opening. He likes coming to Germany where he still has many friends.

The encounter with the children behind the fence at Tempelhof airport is still vivid for the Candy Bomber. "If you help someone, then you feel happy," he says.

US President Barack Obama came, saw - but did he conquer? As Volker Depkat writes, US-German ties have developed, changed and matured over the years. What they most definitely are not is 'normal.' (20.06.2013)

US President Barack Obama has spoken in Berlin almost exactly 50 years after his predecessor John F. Kennedy's historic address to the then-divided city. The speech included a pledge to move toward nuclear disarmament. (19.06.2013)

In pictures: The Berlin Airlift started 65 years ago