In a press conference on Nov. 9, 1989 GDR central committee spokesman Guenter Schabowski unintentionally announced that citizens could travel to West Germany immediately. It was the beginning of the end for East Germany. 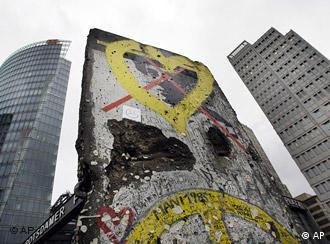 Guenter Schabowski's press conference on November 9, 1989 was a fairly dull affair for most of its duration, according to those present. But a question by an Italian journalist right at the end turned it into one of European history's most memorable events.

Schabowski was asked just before 7 p.m. about when a new law permitting GDR citizens more freedom of travel would go into effect. Schabowski famously told the journalist: "As far as I know, that goes into effect now, immediately."

Since television viewers in both East and West Germany were following the live press conference, his comments electrified East Germans and eventually led to a redrawing of the European map.

Immediately following the remark, GDR citizens rushed to the border separating East and West Berlin, wanting to visit the western part of the city. The GDR border guards were unaware of the press conference, and, taken aback by the crowds gathering in front of them, made repeated calls to their superiors asking for guidance. They successfully prevented citizens from crossing the border for three hours.

But later in the evening, the guards relented and opened the borders. People were able to cross freely from East to West for the first time since the wall was erected on August 21, 1961.

"We are the people!"

In the months prior to Schabowski's press conference, thousands of GDR citizens had taken to the streets demanding political reform. The so-called "Monday Demonstrators" in the eastern city of Leipzig had drawn special attention for their protests.

Shouts by demonstrators of "We are the people!" became commonplace, followed by "Gorbi! Gorbi!" – calls directed at Mikhail Gorbachev, the General Secretary of the Communist Party of the Soviet Union. Since 1985, Gorbachev had been implementing reforms in his country, and Germans living in the GDR hoped to see his ideas adopted there as well. 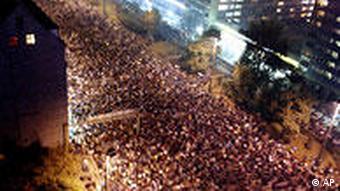 However, the hardline government under GDR leader Erich Honecker was not interested in reform, and the government's refusal to change ultimately led to its own demise.

On October 18, 1989, Honecker was forced to step down. He was replaced by Egon Krenz as head of state, but even this shift could not prevent the GDR's collapse.

A November 4 protest at Berlin's Alexanderplatz attracted 500,000 people, making it clear that a change of leadership would not win the people's trust. When the Berlin Wall opened five days later, demands for reunification of East and West Germany grew louder.

In light of the increasing support for reunification, Western diplomats travelled to the GDR a few weeks after the Wall's opening.

France and England in particular reacted with mistrust to the prospect of the large and economically powerful German state that reunification would create in the heart of Europe. If they could not stop reunification entirely, the two countries at least hoped to apply political sanctions on Germany.

Helmut Kohl, then-chancellor of Germany, kept their position in mind as he delivered a speech in front of the ruins of Dresden's "Frauenkirche" cathedral that drew worldwide attention. 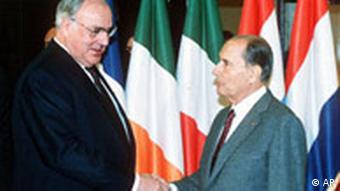 Kohl declared that German unity would only be possible in the context of a more unified Europe generally. He said German and European unification were just two sides of the same coin. His speech garnered thunderous applause from the GDR citizens in attendance.

Nevertheless, French President Francois Mitterrand travelled to the GDR two days later in an attempt to prevent West Germany from annexing the East.

By early 1990, the international community watched closely the process of German reunification to ensure that the interests of Germans as well as of the four conquering allied powers from World War II (England, France, the US and the Soviet Union) were respected. German negotiators worked out the conditions of a German reunification internally, while both West and East German officials consulted with the four powers about the international ramifications of their proposal.

This so-called "2 plus 4" process (representing the two German states and the four allied powers) concluded with a declaration of sovereignty for Germany on September 12, 1990. German negotiations had already resulted in a contract that specified all aspects of the new relationship between East and West Germany on August 31, 1990.

On October 3, 1990, the former East German states officially joined the Federal Republic of Germany. The date marked the end of the GDR and the beginning of a reunified Federal Republic.

What's left of the Berlin Wall

On Aug. 13, 1961, East German workers began erecting the infamous Berlin Wall, which would separate the city in two halves for more than 28 years. Take a look at what's left of the wall nearly two decades after its fall. (04.11.2009)

Dossier: The events that led to the fall of communist Europe

Many were surprised when the border between East and West Germany was opened on the night of November 9, 1989. But there had been signs of increasing weakness in the Iron Curtain for the last year. For more, click here. (29.10.2009)

Berlin Wall - the events that lead to the fall