Britain, bread and the Berlin blockade, 70 years on

In the postwar years, the UK played a major role in breaking the Berlin blockade. Back then, the way to win hearts and minds for democracy was through the stomach. 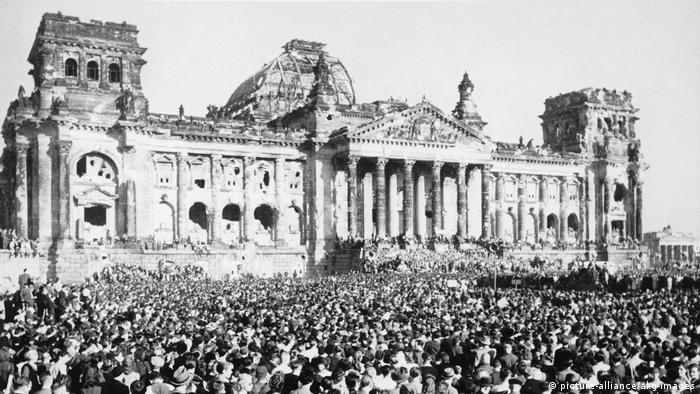 When the UK's Prince Charles met with German Chancellor Angela Merkel last week, the heir to the throne stressed a mutual commitment and friendship that "will, and must, endure," as their countries had "been through so much together."

Although the postwar relationship was shaky at first, that commitment was first proved when Britain helped break the Soviet blockade of Berlin, set up to starve the Allies out of the city 70 years ago.

To Bernd von Kostka of the Allied Museum in Berlin, for Britain to go from enemy to rescuer through the spectacular Berlin airlift would barely be possible today.

"To fly food and goods to the capital of the former enemy that had just bombed London and Coventry, and to do that when at the homefront they had to install rationing for their own people, is a very unique situation," von Kostka said. "To be honest, this is a situation that no country in the world would repeat today."

Hunger: The logic of war and peace

As enemies, both Britain and Germany already knew hunger from the strict rationing during World War Two, but the first steps towards a new relationship also began through food. As occupiers of northwestern Germany after World War Two, Britain had a responsibility to feed a population at risk of starving.

When the Labour Government introduced bread rationing in July 1946 ― something Britain had not witnessed even during the war ― it justified the decision as a sacrifice. To prevent famine in Germany, where "people in the former enemy occupied countries were dangerously near starvation," as Susan Cooper wrote in the book Age of Austerity, bread would be rationed, along with cuts to bacon, poultry, rice, eggs and fat. The idea was to reduce grain imports when world production was threatened by a hard winter so that American grain could be diverted to feed the British occupied zone.

It was not popular — and possibly not even necessary — because the ration was not much smaller than what people had gotten used to eating. But Britons understood the language of hunger amid unprecedented shortages.

Strategically speaking, bread rationing was one of the first hints as to how Britain might try to "win the peace" as the western Allies began to square off against the Soviets in what was shaping into the Cold War. That also meant convincing both publics that as former enemies, they were now friends in the face of a new foe.

"Democracy in Germany was at its beginning," Bernd von Kostka told DW. "It was an essential step to say: 'If we want to establish a democracy, we have to make sure that democracy is able to feed the people.'"

The program, of course, had its detractors. A British Pathe report from 1946 attempting to find the "truth about whether Germany was starving" showed malnourished men and women wasting away in a "hunger ward" in Langenhorn, while a British shop scene showed a baker asking "what about us?"

In the same film, though, Commander of the British zone, Sir Sholto Douglas, made it clear that supporting Germany was the right strategic decision: "What is happening in this part of Germany is very much your concern," he said.

But only two years later, the Soviet Union tried to use German hunger to take full control over the country's east.

British bread rationing ended in July 1948. But just before it did, the mutual distrust brewing between western Allies and the Soviet Union over the west's introduction of a new currency to stabilize the economy, led to the Soviet blockade of Berlin. 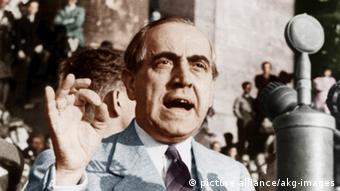 Berlin Mayor Ernst Reuter's speech: "People of the world, look at this city"

Soon after the Soviets severed all land, rail and water access to the British, French and US controlled sectors, the lights went out. The eastern bloc's plan was similar to the British "Hunger Blockade" of Germany in World War One ― starve the people in those sectors to undermine support for the Allies and force them out of the divided city.

But, seeing Berlin as a bulwark against Soviet expansion, the Allies stood their ground and on June 24 agreed on British Air Commodore Reginald Waite's ambitious rescue plan. "It was literally unthinkable in 1948 to supply the western part of a city with more than two million people exclusively by air and Commodore Waite was the first guy who thought this was possible," von Kostka said.

A bridge in the sky

Known in German as the "Luftbrücke," or air bridge, Britain and the US began flying supply missions around the clock in a continuous flow, creating a virtual bridge in the sky. 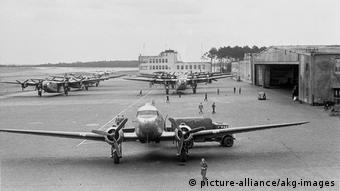 The French, who had suffered the direct consequences of German occupation, soon joined the massive airlift. More than 25 British civilian planes joined the procession of flights taking off and landing at 90-second intervals from airports in all three Allied sectors, supplying at least 5,000 tons of food and fuel a day.

Berliners held out for 318 days before the Soviets realized how far they had fallen in the public's esteem and ended the blockade on May 12, 1949.

While the US had flown in the majority of supplies, with Britain transporting roughly a quarter, von Kostka said the fact the war was only three years behind them made the British role even more remarkable. He also pointed out the political courage that may not be so apparent today.

"Who thinks they're going to be re-elected by telling voters 'I know we've had rationing for years and will have for another five, but we still have to supply a country that was throwing bombs at us three years ago?'" von Kostka said.