Horst Seehofer has warned Angela Merkel against firing him as interior minister. If she's unhappy with his work, Seehofer said Merkel should dissolve her governing grand coalition. 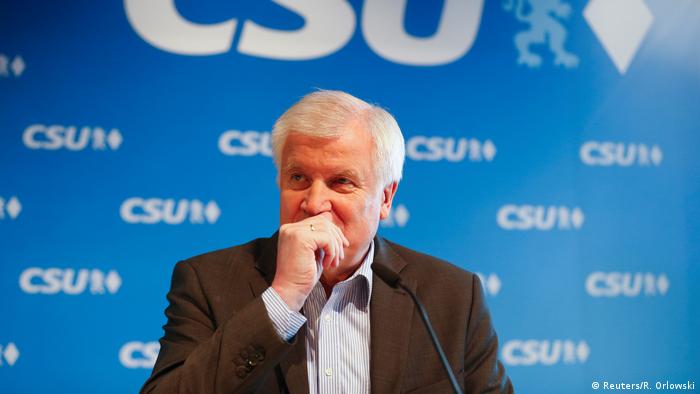 Seehofer said in an interview with the Passauer Neue Presse newspaper on Friday that it would be the first time "looking after and taking care of the security and order of the country is the reason given for firing a minister."

Merkel and Seehofer are currently arguing over Germany's migration policy. As part of a still unpublished "migration master plan," Seehofer called for rejecting asylum-seekers at the German border if they have registered in another EU state or have been refused asylum in Germany in the past. Merkel has rejected the suggestions, insisting instead a Europe-wide solution to migration.

During a parliamentary meeting at the German Bundestag last week, Seehofer reportedly told Merkel that he would use a "ministerial authorization" to institute his plan alone if a compromise was not found.

Merkel is keen not to rile other EU member states by taking unilateral action on migration ahead of a meeting of some EU leaders on Sunday and a larger EU summit next week.

EU Budget Commissioner Günther Oettinger has also called on Seehofer not to go it alone with regard to refugee policy.

"That would mean that a new, significant stage of escalation would be reached that would call [Merkel's conservative bloc] into question," he said in comments carried by the daily Handelsblatt on Friday. He added that the CSU was "damaging Germany's ability to act within the EU."

The EU needed a stable German government, especially in view of the fact that stability was no longer guaranteed in other member states, Oettinger said.

'Backed by my party'

But Seehofer seems prepared for his stance to possibly lead to the end of Germany's coalition government.

He said his Christian Social Union (CSU), the Bavarian sister party to Merkel's Christian Democratic Union (CDU), backed his position on migration, adding that Merkel might as well dissolve the government rather than fire him.

"I hear from many people day to day: 'Stay firm. Don't give in!' It's about credibility," Seehofer said, adding that support from his party is "more important than any office."

"I am the leader of the CSU, one of the three coalition parties, and act with the full support of my party. If the chancellery is not satisfied with the interior minister's work, then the coalition should end," he said.

Bavarians are set to vote in state elections in October, and the CSU is facing competition on the political right from Germany's far-right populist Alternative for Germany (AfD).

"The CSU is fighting for its beliefs," Seehofer said. "That is more important than positions."

Angela Merkel has won time: The government won't fall apart – for the time being. But the dispute over migration certainly has not been resolved, and she faces a "mission impossible," says DW's Katharina Kroll. (18.06.2018)

German Chancellor Angela Merkel and Interior Minister Horst Seehofer are at odds over Seehofer's strict refugee policy. How do refugees in Germany view the issue? (18.06.2018)