Angela Merkel buys time in government crisis over asylum | Germany | News and in-depth reporting from Berlin and beyond | DW | 18.06.2018

Chancellor Angela Merkel has got her Interior Minister Horst Seehofer to agree to wait for an upcoming EU summit before imposing new border controls. His asylum reform plan could threaten the EU immigration system. 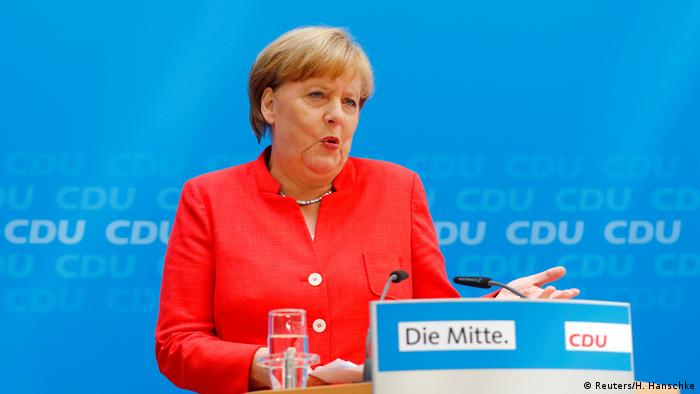 Merkel managed to get Seehofer to agree to wait for a European summit at the end of the month, so that a new bloc-wide asylum reform could be agreed before he unilaterally imposed new border controls at Germany's borders.

In a press conference in Berlin on Monday afternoon, Merkel stressed that the two parties shared the common goals of reducing immigration and better organizing migration into Germany, and that they had agreed to work together. Nevertheless, she signalled she would not accept the CSU's brinkmanship on the issue: There would be "no automatism" in shutting borders to asylum-seekers after the EU summit, she said — a phrase that effectively gave herself another deadline extension.

While Merkel was answering questions, Seehofer gave his own press conference in Munich, at which he underlined that the chancellor agreed to "62-and-a-half" of the 63 points in his asylum reform "master plan." He also said he would support the chancellor's efforts to make deals with EU partners. At the same time, he said the government did not yet "have the issue of migration under control" and that a lot of work still needed to be done.

Maintaining the pressure on Merkel, Seehofer said he wanted to start turning migrants back at the border if EU talks failed to produce results.

Merkel: 'We will no longer accept those refugees who have already been sent back'

The row is centered on an asylum system reform "master plan" Seehofer wants to implement in Germany, which would see migrants who had already been registered in another European Union country turned away at the German border.

This would potentially disrupt the EU's Dublin immigration system and threaten the principle of free movement within the EU, especially if, as Merkel fears, other countries impose similar border controls. It would also violate asylum-seekers' rights to have their cases heard fairly.

The German constitution guarantees the right to asylum to anyone persecuted for political reasons, while the Dublin convention stipulates that everyone application be checked on a case-by-case basis. That means migrants have a right to be heard if they claim asylum, even if they don't have valid travel documents, and even if they have applied for asylum before and been rejected (though in such cases they are banned for re-applying for a certain period of time).

Critics and political pundits, including former Interior Minister Gerhart Baum, have described Seehofer's proposal as illegal, not to mention a reckless destabilization of Merkel's new government.

The CDU and the CSU held separate leadership meetings on Monday to hash out potential compromises. According to CSU sources cited in several news agencies, Seehofer is willing to introduce his measures piecemeal. The first step would see Germany only rejecting migrants who had previously been deported or were subject to an entry ban — a point that Merkel has agreed to.

If Seehofer were to impose border controls unilaterally using his authority as interior minister, Merkel could overrule him using her constitutional power as chancellor. But that scenario would likely lead to Seehofer's resignation, a collapse of the government coalition, and new elections.

The CSU is keeping the pressure on the chancellor up. The DPA news agency reported that the party had agreed at its meeting to begin preparations for setting up hard border controls — in case European agreements were not struck.

Read more: Analysis: Did Merkel bring political blow on herself?

Seehofer set out his position in a guest column in the Frankfurter Allgemeine Zeitung on Monday, in which he agreed that a European solution was necessary, but said, "I must have the right to turn people away" in cases where people do not have a right to enter under European law.

Read more: Opinion: Germany is trapped in a 'credibility showdown'

Seehofer's CSU is facing a challenge from the far-right Alternative for Germany (AfD) in Bavaria's state election in October. A tough stance on migration is being interpreted as the most effective way to ward off the challenge by the populists.

Bavarian State Premier Markus Söder, a rival of Seehofer in the CSU, has questioned the efficacy of the upcoming EU summit, because, he claimed, no European agreement had been reached in the last three years. "We're convinced that it is an important task to implement a change of direction on asylum in Germany," Söder said before Monday's party meeting.

A Bavarian official known as a "tough dog" for taking a harder line against asylum-seekers is reportedly set to take over at BAMF. The agency's former head was fired on Friday over an asylum application scandal. (17.06.2018)

Italy's new government appears at loggerheads with Germany on migration. But dig deeper and there is common room to cooperate despite the rhetoric. (17.06.2018)