CSU leader Horst Seehofer: The man who could have brought down Angela Merkel | Germany | News and in-depth reporting from Berlin and beyond | DW | 02.07.2018

CSU leader Horst Seehofer: The man who could have brought down Angela Merkel

The Bavarian conservative leader and interior minister dug in his heels on the issue of migrants — much to Angela Merkel's chagrin. As a look at Seehofer's past shows, this collision was a long time coming. 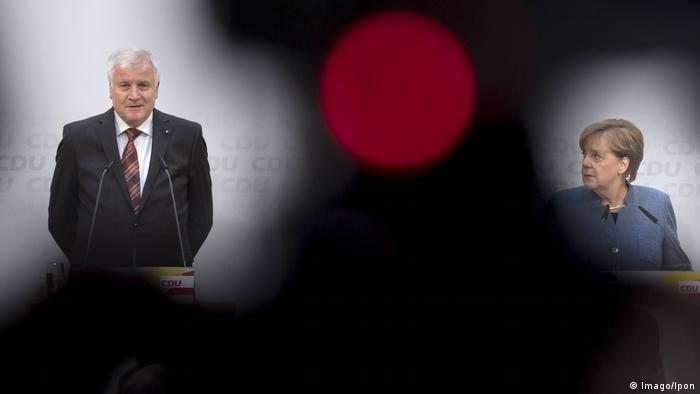 The differences between Angela Merkel and Horst Seehofer go all the way back to early childhood. Whereas the chancellor was the daughter of a Protestant theologian and a schoolteacher, who moved from Hamburg to communist East Germany when she was a girl, Seehofer was born in 1949 to a conservative, Catholic family down south in Bavaria. His father was a truck driver and a construction worker.

And whereas the academic Merkel, who studied physics, only became politically active in her mid-30s after the collapse of communist Eastern Europe, Seehofer joined the youth organization of the Bavarian conservative party, the Christian Social Union (CSU), at the age of 20 and became a civil servant and administrator.

Merkel was a political outsider who owed her rise to the top in the Christian Democratic Union (CDU), the conservative party in the rest of Germany, to a number of unlikely and fortuitous circumstances. By contrast, Seehofer worked his way up through the ranks of the CSU, earning a Bundestag mandate for the first time in 1980, serving as health minister under former Chancellor Helmut Kohl and becoming a deputy CSU parliamentary spokesman in 1998.

All the while, he patiently waited for longtime CSU chairman and Bavarian State Premier Edmund Stoiber to clear the way for higher posts. During this period, he even served as agriculture minister in Merkel's first cabinet beginning in 2005.

After a personal scandal cost him a chance at the top job in his party in 2007, the CSU's poor performance in regional Bavarian elections the following year gifted him a second opportunity. He served as the head of both the CSU and the state of Bavaria from 2008 to 2018, when he resigned as Bavarian state premier and moved back to Berlin.

Ironically for a former health minister, one of the key junctures in Seehofer's life was a serious coronary infection known as myocarditis, with which he was diagnosed in 2002. Seehofer's heart function had decreased to one-fourth of its normal rate. He could well have died.

It is often said that this brush with mortality convinced Seehofer never to compromise on his core political principles. As health minister under Kohl, for example, he dissolved his own ministry after a scandal with HIV-infected blood. He also pushed through reforms that cut costs in Germany's often bureaucracy-heavy and inefficient health care system by today's equivalent of some 5.5 billion euros ($6.4 billion) within a year.

Stammtisch - Heimat: More than a feeling?

At the same time, Seehofer proved capable of swallowing bitter pills when his political survival depended on it. In 2007, he carried on in his function as CSU deputy leader despite his frustrated ambitions to the top job — a move that paid off.

And his decision to return to Berlin earlier this year as part of Merkel's new cabinet, in the role of interior minister, is also a reflection of political pragmatism. After disappointing results for the CSU in the 2013 Bavarian regional election and the 2017 national German election, Seehofer had come under pressure from younger rivals in the party, chiefly Alexander Dobrindt and Markus Söder.

To save his skin, Seehofer agreed to relinquish the state premiership of Bavaria to Söder while retaining the party chairmanship. He also took over the Interior Ministry in the fourth government of Merkel, the woman he has often seemed to regard as more of an opponent than an ally.

Taking it almost to the limit

But Seehofer did not return to the capital only to help construct the legacy of the four-time chancellor.

From the very beginning, the Bavarian has tried to put an individual stamp on his ministry. He even changed its official title to include the word "Heimat," a term with traditionalist and conservative connotations implying that people are essentially connected with their homeland.

And even before he assumed his new post, Seehofer consistently opposed Merkel on the refugee issue. Beginning in late 2015, as Bavarian state premier he called for the number of refugees to be capped at 200,000. That number would eventually hit around 1 million. He told daily newspaper Süddeutsche Zeitung that the CDU's decision that year to open Germany's borders had "split Europe." As early as September 2015, he explicitly targeted Merkel's decision to allow refugees in Hungary to enter Germany.

"It was a mistake that will follow us for a long time," Seehofer told Der Spiegel magazine. "I don't see any chance to get the cork back in the bottle."

Putting the cork back in the bottle is arguably what Seehofer was trying to do by insisting that Germany should be allowed to turn back migrants at its national borders, a move some believe would contravene EU law and which Merkel has consistently ruled out.

Without doubt, Seehofer's insistence on stemming the flow of migrants reflects the views of Söder, Dobrindt and other Bavarian conservatives as well as his own beliefs. The CSU leader went so far as to announce his resignation late in the evening on Sunday, July 1 — only to agree to a final round of crisis talks with Merkel.

Now he says that the establishment of transit centers on the German-Austrian border addresses his concerns enough that he can stay on as a member of Merkel's cabinet. But how long that arrangement can last is anybody's guess.

A glaring rift has emerged between Angela Merkel's conservative CDU and its Bavarian CSU sister party over how to deal with asylum-seekers. The days of Germany's coalition government could be numbered, warns Jens Thurau. (14.06.2018)