A glaring rift has emerged between Angela Merkel's conservative CDU and its Bavarian CSU sister party over how to deal with asylum-seekers. The days of Germany's coalition government could be numbered, warns Jens Thurau. 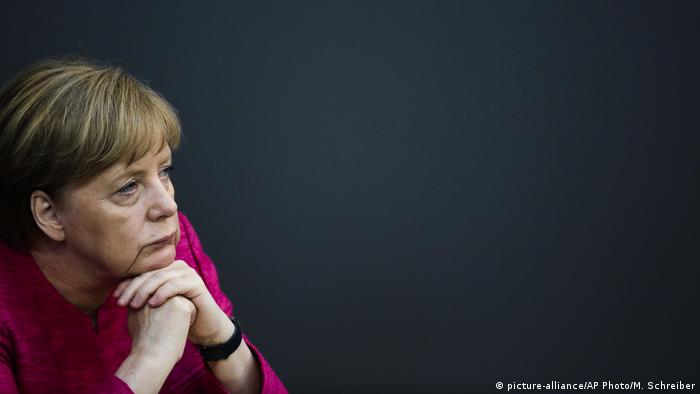 It's turbulent times in Berlin. Despite late-night talks between German Chancellor Angela Merkel and her interior minister, Horst Seehofer, no agreement was reached over how to deal with asylum-seekers. Later, a parliamentary session was paused to allow Merkel's Christian Democratic Union (CDU) and Seehofer's Christian Social Union (CSU) to convene separate emergency meetings — illustrating the glaring rift between the two allied parties. And then Seehofer announced that, if push comes to shove, he would single-handedly implement his plan to turn back asylum-seekers at the border if they had already registered in other EU states. Seehofer has the backing of his party, and that has put Merkel under immense pressure. Her grip on power seems to be slipping. Will she assert herself?

Merkel, for her part, wants to reach a European Union-wide agreement on asylum-seekers. Most of all, she wants to bolster the EU's external borders to keep the bloc's internal borders open. But establishing a common EU approach is not on the cards any time soon, and the CSU is growing impatient.

So what options does she have? Merkel, being the chancellor, is entitled to determine the government's overall course. But what exactly does that mean? Merkel could make Seehofer resign for diverging from the government's overall agenda, but that would also mean the end of Germany's coalition government. Merkel could also instigate a vote-of-confidence procedure in parliament. But whatever she chooses to do, she cannot ignore Seehofer's defiance.

The chasm that has emerged between Merkel's CDU and Seehofer's CSU has been long in the making. The CSU has opposed Merkel's welcoming stance towards asylum-seekers going back to her open door policy in 2015, when she allowed refugees then in Hungary into Germany. Even some members of the chancellor's own party have lost faith in her liberal approach to asylum-seekers, though her government has since backpedaled those policies somewhat.

The conservative opposition Merkel faces over her handling of refugees is just one part of the growing sense that a new right-wing nationalism is challenging the chancellor's very worldview. And now the CSU, which is under pressure from the far-right Alternative for Germany party as Bavaria's state elections loom, is taking aim at Merkel — and its very own coalition government.

Will Merkel manage to regain control? It is hard to imagine after such a tumultuous day.

Once again, Chancellor Merkel and Interior Minister Seehofer are at each other's throats as they argue over how to deal with asylum seekers. But that only strengthens right-wing populists, warns Marcel Fürstenau. (13.06.2018)

Niebler: 'What's wrong with the cross on the wall?'

At a time of growing divisions in Europe over religion and migration, DW talks to Angelika Niebler, MEP for Bavaria's Christian Social Union (CSU), about whether politicians should be avoiding religious issues. (15.05.2018)

Pakistan: Islamists halt march after deal with government 6h ago

Opinion: Erdogan is fighting to stay in power 9h ago