A new measure in Frankfurt now requires those who sleep in public places to pay an on-the-spot fine. Homelessness in Germany has risen dramatically in recent years, with hundreds of thousands sleeping rough nationwide. 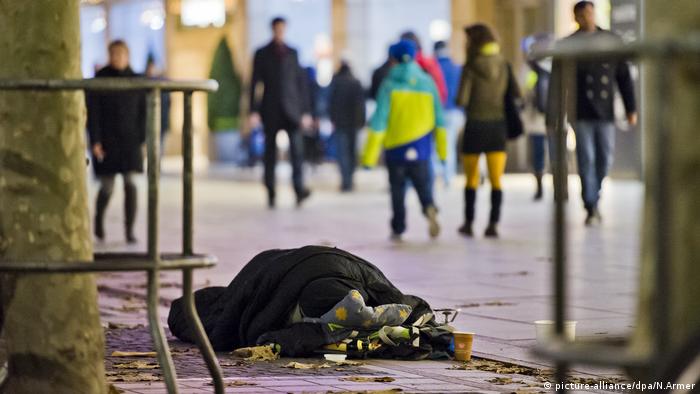 In Frankfurt, the wealthy epicenter of Germany's finance sector, homeless people will now have to pay fines for sleeping on downtown streets. The move came as German President Frank-Walter Steinmeier called for better support for the nation's homeless on Monday.

Anyone who has alighted at Frankfurt's central train station will be familiar with the paradox of the city's central avenues: In the shadows of the city's skyscrapers and a branch of the European Central Bank, a surprising number of destitute citizens regularly seek shelter on the streets.

Originally reported by local newspaper the Frankfurter Rundschau, the new measure was confirmed by multiple city councilors: Those who sleep rough in the city's downtown pedestrian zone, either on the street or public benches, must pay an on-the-spot penalty for doing so.

Fine assessed for refusal to move

Left party city councilor Astrid Buchheim said in an interview with DW that she believes the fine is around 40 euros, but that it is up to the the city's regulatory authority, the Ordnungsamt, to deal with street people who cannot pay the fine from money they may have collected.

The regulatory body also told local media that the homeless would have to pay the fine only "if they refused multiple requests to move" from the public areas where they are found sleeping.

Forcing the destitute to pay a fine for sleeping rough remains an exception, the Ordnungsamt told the Frankfurter Neue Presse.

Read more: Germany: 150 percent rise in number of homeless since 2014

City councilors defended the law in the Frankfurter Rundschau. Christoph Schmitt, a member of Chancellor Angela Merkel's center-right Christian Democrats (CDU), argued that there were many homeless shelters and service centers across the city, while his Green party colleague Beatrix Baumann elaborated that these services were unfortunately "often unused" by the local homeless population.

Neither politician touched on the issues of mental illness or threats of violence that can keep the homeless from sleeping in shelters.

City council member Astrid Buchheim had some hefty criticism both for the fee, and for the suggestion from her colleagues that Frankfurt does enough to help its homeless population.

"They are doing almost nothing," Buchheim told DW. "Some of them are foreigners and they don't think it's their job to help them too. They've made one level of a downtown subway station available for them to sleep in...but that's not a shelter! It's still cold, it's not secured."

Buchheim and several other city leaders tried last week to have a former university cafeteria, which until recently housed refugees and now stands empty, into a homeless shelter. But their request was refused by the rest of the council.

"Not enough is being done to fight the root causes" of increasing homelessness in Germany, she said. "As rents go up and up and more high-priced real estate is built where affordable housing once stood."

The circumstances for the homeless in Frankfurt were thrown into sharp relief on Monday. Just as the social media outrage over the fines was heating up, German President Frank-Walter Steinmeier spoke of the need for solidarity with the homeless during an event in Berlin. 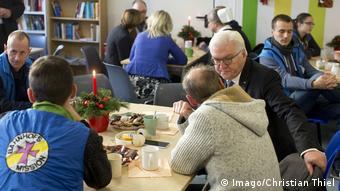 The federal government must assure that "the gap between the rich and poor does not continue to expand," said Steinmeier, speaking from the Berlin Zoologischer Garten (Zoo) station, which houses the oldest of Germany's 105 "Train Station Missions" that help the needy across the country. The president added that more resources were necessary in order to "get people back on their feet."

The Berlin Zoo station's mission is being greatly expanded so that it can further support the 30-40,000 homeless living in the capital. The center's leader, Wolfgang Nebel, told news agency EPD that some 70 percent of Berlin's street people suffered from mental illness.

A homeless man in Nuremberg has been injured after being tipped from a paper recycling container into a garbage truck. The incident highlights a growing problem in Germany. (08.12.2017)

A Berlin court has sentenced a Syrian man to over two years in prison for trying to set fire to a homeless man. Five other young refugees were also convicted for taking part in the attack or failing to help the victim. (13.06.2017)