Germany: 150 percent rise in number of homeless since 2014

German government figures estimate the number of homeless people in the country to total around 860,000 — more than half of whom are refugees. That number is expected to rise a further 40 percent to 1.2 million by 2018. 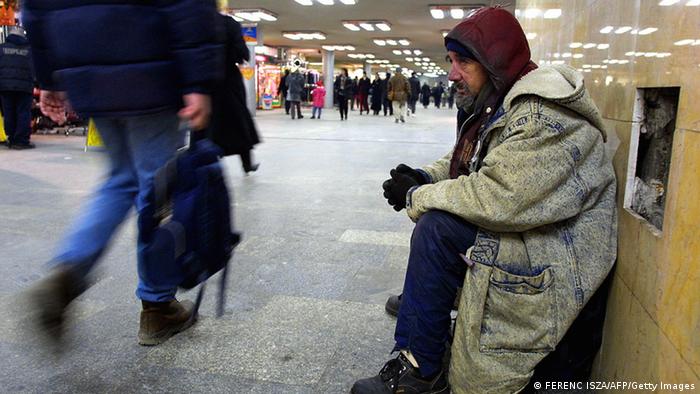 Figures released on Tuesday by Germany's federal working group for homeless persons' assistance (BAG) point to a shrinking supply of affordable and social housing, coupled with the government's decision to allow to almost one million refugees to enter Germany in 2015, as reasons for the country's exponential rise in the number of homeless.

According to federal statistics for 2016, 440,000 of the country's 860,000 homeless people were refugees. However, BAG stressed that its data does not show hundreds of thousands of refugees living on the streets, since it also took refugees living in communal housing and shelters into account. Officials said they chose to include these refugees in their latest census as they are also in need of housing.

BAG managing director Thomas Specht stressed that "while immigration has dramatically aggravated the overall situation, but it is by no means the sole cause of the new housing shortage." The main cause, he said, was misguided government housing policy.

A hairdresser for the homeless

Germany's homeless data by the numbers:

That amounts to a 33 percent rise in just two years.

·     Excluding refugees, 32,000, or eight percent, of homeless people in Germany are thought to be children or minors.

According to Specht, the number of social housing units has fallen across Germany by around 60 percent since 1990 to just 1.2 million, as communes, states authorities and the federal government continue to sell their stock of housing to private investors. "These policies have made affordable housing inaccessible for many," Specht said.

Following the latest homeless statistics, BAG managing director Werena Rosenke called on the federal government and municipal authorities to take greater responsibility in future housing policy. This would, she said, include the introduction of quotas for letting subsidized apartments to homeless people and "the acquisition of available housing stock from private landlords and businesses."

An estimated 2,000-6,500 people in the German capital are homeless. Without a roof over their heads, they're particularly vulnerable during days of extreme heat. A new project aims to offer some respite.