Number of people without a permanent abode in Germany rises dramatically | News | DW | 05.12.2016

Number of people without a permanent abode in Germany rises dramatically

The number of people in Germany without a fixed place of abode has risen around a third in just five years, authorities say. Many children and young people are among those living in makeshift circumstances. 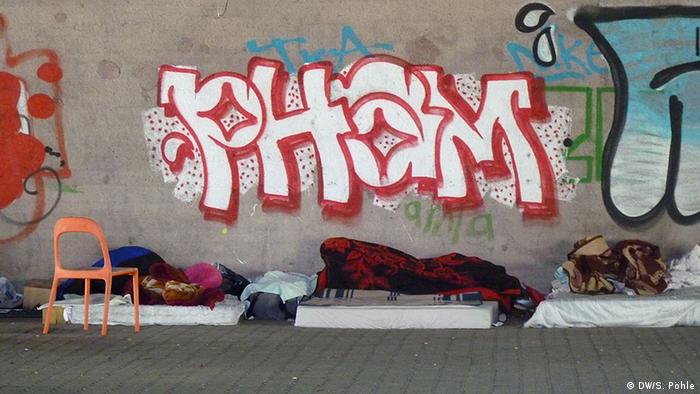 James Bowen's autobiography is one of the biggest best sellers centered around an animal. The moving story has now been adapted for the big screen, and opened in London on Friday. (06.11.2016)

The number of older Germans living on meager means has increased 25 percent in ten years, a report says. The opposition Left party says the government isn't doing enough for some of the nation's most vulnerable people. (10.09.2016)

Creativity is what matters at "People Design Berlin," a label founded by two young designers that brings out the talents of homeless teenagers. Here they are treated with respect regardless of where they come from. (05.11.2016)

A partial economic recovery in European Union member countries has not translated into fewer people living in poverty despite them having full-time jobs, a new study has shown. Germany is no exception. (14.11.2016)

The number of people in Germany without a permanent place to live rose from 248,000 to 335,000 between 2010 and 2014, the German government said on Monday in response to a question from the opposition Left party.

The figure amounts to an increase by almost a third in the number of people without a permanent roof over their heads in the five year period.

The statistics provided by the Federal Association for Homeless Assistance (BAG Wohnungslosenhilfe) showed that 220,000 of such people in 2014 were men and 86,000 women, while 29,000 children and young people were also without a fixed place to live.

She said she saw increasingly unaffordable housing and sinking incomes in many areas of society as being the reason why many people could not live in an apartment or were evicted.

In its response to the question from the Left party, however, the Labor Ministry suggested that most cases were caused not by a lack of affordable housing, but usually by factors such as family problems, addiction or illness.

The BAG Wohnungslosenhilfe itself came down rather strongly on the side of the Left party.

Deputy managing director Werena Rosenke told the EPD news agency that the government's view could not be accepted without argument, saying that rent debt was the main reason for losing a place to live.

And once people lost an apartment, she said, they would not find a cheap replacement at the current time.

The organization also predicted a further strong rise in the number of people without permanent housing, saying the figure could rise to 500,000 by 2018.

In the German statistics, people without a fixed place of abode and homeless people are not identical. The figure includes those who neither rent nor possess any form of housing, such as people in emergency shelters, cheap boarding houses or living with friends, as well as those who live on the streets.

According to Wohnungslosenhilfe, 39,000 people in Germany fell into the latter category in 2014.