In the western Gemany city of Cologne one local has taken it upon himself to build mini houses for the homeless. The city insists, however, that "no one has to freeze on the streets of Cologne this winter."

Mini-homes for the homeless in Cologne

Three weeks to Christmas and the temperatures have plummeted across Germany. Whilst most Germans are deciding which mulled wine will best keep them snug at the Christmas market, some 300,000 homeless people across the country are more concerned with how to stay warm and where they might sleep tonight.

But for a few in Cologne, local photographer Sven Lüdecke (pictured above) is hoping to provide a warm place to shelter through the winter months.

They are not alone

Just about big enough to stand up in, and wide enough to fit a mattress, the small wooden houses provide shelter from the rain and biting cold for some of those most in need.

"The main aim is to give people back a little piece of normality, and to show them that they are not alone and that we won't forget them," Lüdecke told DW.

Within hours of seeing a television report about the homeless in September, Lüdeke was standing in the hardware store, buying materials for his first mini-house. His inspiration came from American artist Gregory Kloehn, who builds tiny cottages for the homeless. 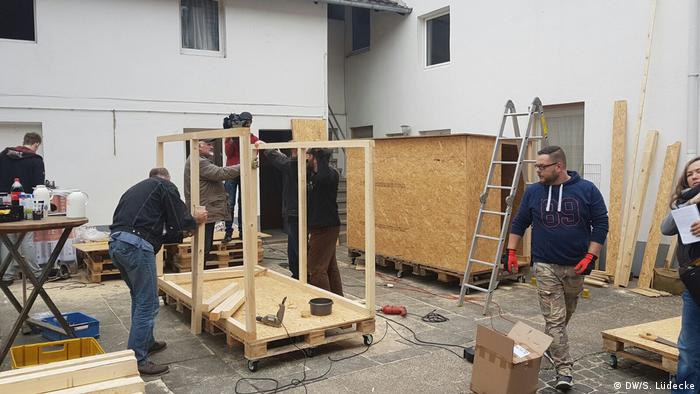 In the future, the team hopes to build one mini-houase per month

Costing 600 euros ($638) in total, plus an extra 255 euros for transportation, the houses are funded out of Lüdbecke's own pocket and donations which have been trickling in over the past three months.

Lüdecke's back yard has since come to resemble a small building site, with saws, drills and screws ready to be put to work. Marked wooden panels, balance against pallets and timber, waiting to be assembled.

Constructed out off three wooden palettes, the flat-pack shelter is mounted on wheels, insulated, and furnished with a mattress, small table and fire extinguisher.

"The new tenant can also help us personalize their house," Lübecke said. "They can decide 'which colors do I want, do I want a pointed roof, do I want a flat roof, do I need the window to be on the left, or would I rather have it on the right?' It's all possible."

'It's his pride and joy'

For Lüdecke, a born Berliner, the participation of the homeless is an important part of the project.

"I think it makes a big difference, because they feel needed. They get jobs to do, they probably do appreciate the house more than they would if it was just a gift – and I also think I'd be more likely to take better care of a house if I helped to build it, rather than if someone just gave it to me," he told DW.

So far, the reaction from the new tenants has been extremely positive, Lüdecke said. One of the most recent recipients was Peter.

"He cried with happiness," Lüdecke recalled. "Giving this gift is like seeing a child's face light up at Christmas."

"Peter has been on the streets for 17 years and he just wasn't used to it. He takes such good care of his house - it's his pride and joy.

"His dog went straight inside and made himself comfy - he didn't want to leave." 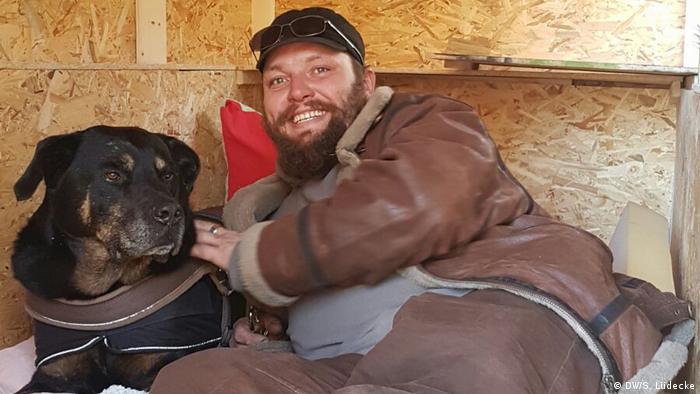 Peter, pictured here in his new mini-shelter, has been living on the streets for 17 years

"I think it's positive to see that someone has engaged themselves in helping the homeless off their own back. It's good to see a new concept of how we can deal with the issue," Just said.

"I am, however, concerned about the safety of the little houses," he said, adding that a city-wide project "Winterhilfe" - Winter help - was already in place. For 20 years, the initiative has provided shelter to accomodate all of the city's homeless.

"In total, some 5,000 people are currently homeless in Cologne. But this figure also includes those who are already living in a shelter," Just explained.

"Unfortunately we haven't been able to reach between 150 and 200 of these people," he added.

The reasons vary. "Some people see supervision as a threat to their freedom, or don't like the prospect of living with other people in a shelter."

"Others simply don't want to go," he added. 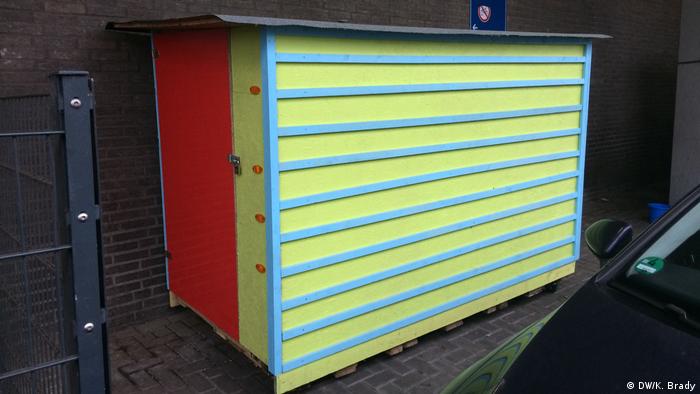 Dirk Schumacher, leader of the accommodation department for the City of Cologne's Office for Social Policy and Seniors, told DW: "No one has to freeze on the streets of Cologne this winter."

Echoing Werner Just, Schumacher added: "Social work is only successful when people let you in. You can't make anyone accept the help at hand."

"Building shelter for these people isn't a long-term solution," he added. "These people also need help finding their way back into normal life, permanent accomodation and employment.

But what started as Lüdecke's private project has grown into an seven-man team, which is now establishing the registered association: "Little Home Köln."

"We want to be able to offer more support to the homeless," Lüdecke said. "To help them find a proper flat, or maybe even a job. That's our goal."

Germany's homeless to meet Pope Francis at festival for the poor

Some 600 homeless people from Germany are about to meet Pope Francis. For many, it is the journey of a lifetime that they hope will bring personal and societal change. Jenny Witt reports from Hamburg. (10.11.2016)

A Berlin home that has housed homeless people for 20 years is in danger of being cleared. The owners have seen a new opportunity: the city pays 50 euros a night to house refugees. (03.02.2016)

James Bowen's autobiography is one of the biggest best sellers centered around an animal. The moving story has now been adapted for the big screen, and opened in London on Friday. (06.11.2016)

Mini-homes for the homeless in Cologne