Berlin homeless face eviction for refugees | Germany| News and in-depth reporting from Berlin and beyond | DW | 03.02.2016

A Berlin home that has housed homeless people for 20 years is in danger of being cleared. The owners have seen a new opportunity: the city pays 50 euros a night to house refugees. 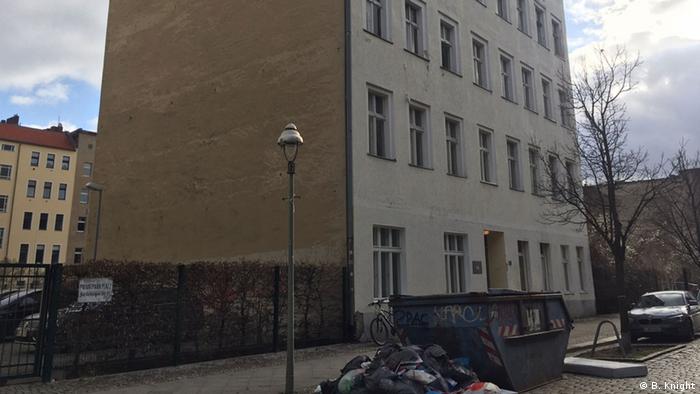 "Ha! That makes me happy," says the old man, staring at a letter pinned to the notice board in the dilapidated groundfloor hallway. The letter, dated January 31, was from local district councilman Stephan von Dassel and it assured the 32 inhabitants of the "Moabit Guest House" that they would be able to stay - at least for now.

"We are firmly convinced that you can continue to live legally in the Berlichingenstrasse," von Dassel wrote. "You moved in there legally and with the knowledge of the owner and you have always paid your living costs via the district authority punctually and in full."

The old man reading the letter (with no small degree of schadenfreude) was not a tenant, but worked for the previous manager of the property, a home for the homeless in the Moabit district of Berlin that he had helped run for the past 20 years - until the end of last month. Some of its inhabitants have been there for many years, and some of them are sick with alcohol addiction, which is why the fact that they each have their own room is seen as important. "Of course you grow close to them, over the years," the man said, still reading the councilman's letter.

But now, the owner has terminated the contract with the property manager, and rented the property out to a new firm, which, the old man alleges, was willing to pay double the rent and turn it into a refugee home - which would mean the homeless people would have to leave. According to the Green party councilman's letter, that plan is now on hold. "It's all just greed," the old man muttered, before saying he didn't want to be named and then pocketing the letter so he could make his own copy.

Dollar signs in their eyes 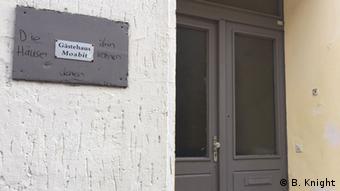 The house has been sheltering the homeless for 20 years

The cause of the trouble is this: Berlin's unemployment agency pays 22.50 euros ($24.50) per night to property managers who put up a homeless person, but the Berlin Department for Health and Social Affairs (LaGeSo) has begun offering up to 50 euros per night to put up one of the estimated 80,000 refugees that arrived in the city late last year.

Hostels and property owners willing to turn their buildings into homes have spied a golden goose. The Gikon company, set to become the new managers of the Moabit Guest House from March 1, runs several refugee homes around Berlin. "We've only had good experiences, both with the refugees and with the authorities," emphasizes Gikon head Martin Kleiner. "We provide advice, help organize language classes, help integration."

Kleiner denies being motivated by greed. For one thing, he says Gikon only charges the city 40 euros for refugees, and was willing to go below that at the Moabit Guest House. He also told DW that they had no intention of kicking out the current tenants - only of dividing the rooms and making them smaller. For Gikon, the 22.50 euros per night is simply not enough to maintain the property, not least because their rent will be twice as much as under the last manager.

"For us it is financially impossible to put one person in one room," Kleiner said. "We offered to make large rooms into two small rooms, and would leave two floors for all the current inhabitants for the same price. At first von Dassel seemed amenable to that, but now he seems to have changed his strategy. We have put in writing that we will do all we can to not force out the current tenants. That is not in our interests."

Kleiner also said that his company had looked around for other compromise options in other homes. "But everything we suggested was turned down, which for us wasn't understandable," he said. 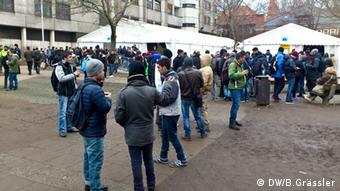 Councilman von Dassel counters that none of these offers were "concrete." "They talked about it, but they never offered us any places in any form," he told DW. He also said the proposal to split the rooms wasn't viable: "some of them only have one window."

"[Gikon] probably just had dollar signs in their eyes," said von Dassel. "They just counted the rooms and worked out how much profit they could make."

Clamping down on illegal housing

At the moment, the situation for the guest house remains extremely unclear. Kleiner himself said the Council is now trying to negotiate directly with the owners, who, according to von Dassel, is trying to duck its responsibility. For February, in other words, the inhabitants are being left to their own devices.

Everyone knows that more and more property owners in Berlin are looking to exploit the 50-euro-per-refugee rate: the authorities appear to be so desperate for space that one barely has to meet any requirements. "You just show up, say, 'hello, I'm a hostel,' and if you're lucky you get the money," said von Dassel.

But he also thinks the 50-euro rate won't last much longer. "The head of the LaGeSo assured me of that today," he said. In future, he said, the going rate will be reduced to a much less tempting 30 or 35 euros a night per refugee.

Bavaria's Social Ministry said the new center, which opened in Nuremberg on Monday, was not necessary. A ministry spokesman said attacks on gay or straight individuals would not be tolerated. (01.02.2016)