Getting ready for Margaret Atwood's new novel, 'The Testaments'

It's the book launch event of the year: "The Testaments" hits bookshelves next week amid a near-total media embargo. But why is there such a hype behind Margaret Atwood's sequel to "The Handmaid's Tale"? 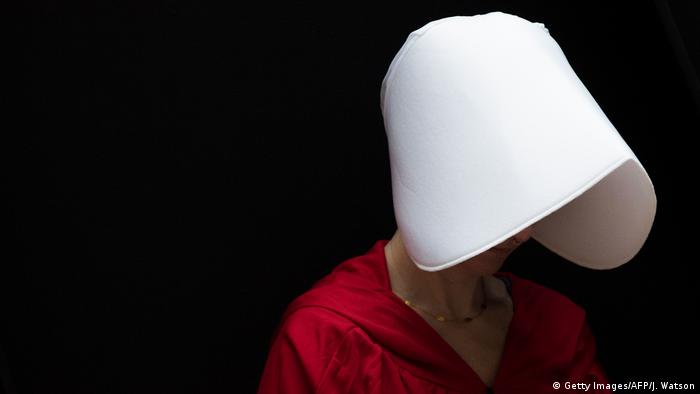 She has been described as the "queen of dystopia" for her chilling portrayal of authoritarianism in her bestselling 1985 novel, The Handmaid's Tale. Even though it's a work of fiction, Atwood's most famous book is actually based on a series of facts: The 79-year-old award-winning Canadian author based her terrifying narrative on existing and historical cases of oppression against women.

"There's a precedent in real life for everything in the book. I decided not to put anything in that somebody somewhere hadn't already done," Atwood said in a 2017 interview with People magazine. In fact, one doesn't have to dig deep to find parallels to the story in Nazi Germany, Pinochet's Chile or the aftermath of the Iranian revolution, to name a few precedents. 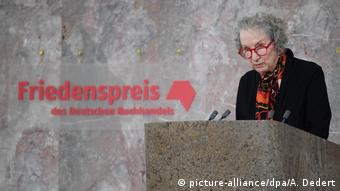 Atwood took inspiration from real events — both for "The Handmaid's Tale" and for its sequel, "The Testaments"

But it's not the past that draws readers to Atwood's prose; her fans admire her foresight, as they see worrying parallels in current political developments:

"I don't enjoy being right, because being right means that we are where we are. And that's not a fun place," said Atwood a few months after US President Donald Trump's inauguration. Trump's administration has since rolled back numerous women's rights — such as cutting public funding to sexual health clinics and appointing Supreme Court justices favorable to strict restrictions on abortion.

Atwood says this is why the book and its namesake TV-series adaptation by Hulu are having such a renaissance — and also why she decided to pen a sequel.

The TV show was a timely revival of the novel published over 30 years ago. Almost overnight, it catapulted Atwood's story about a sex slave called Offred living in the Republic of Gilead (which geographically corresponds to the United States after a civil war) into the realm of popular culture and made the author a superstar among millennials. 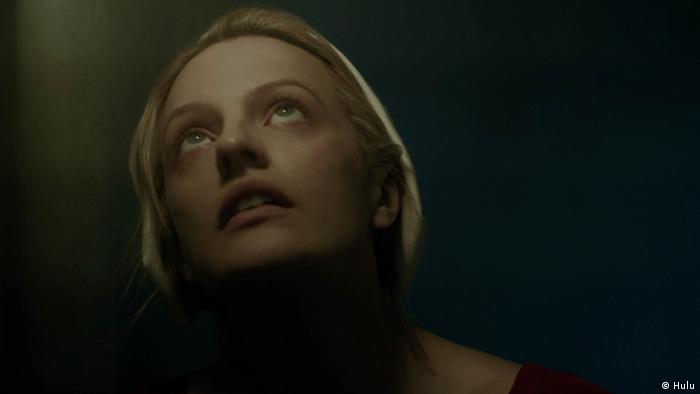 The unfortunate protagonist's role in this extremist-Christian society is to bear children to tyrannical male leaders; she has no rights and serves no other purpose than being reduced to a procreation machine. To label this world as misogynous would be an understatement; some scenes from the television series easily rival with some of the worst images that have emerged from the reign of terror of the "Islamic State" in Iraq and Syria.

Meanwhile, the scarlet-red satin-uniforms and snow-white bonnets worn by Offred and the other violently subjugated handmaids in the series are also donned by today's women's rights' activists as a symbolic reminder of the slippery slope from machismo culture to totalitarian patriarchy, or from "speculative fiction" — as Atwood refers to the genre of the novel — to fact.

"We're not living in Gilead yet, but there are Gilead-like symptoms going on," Atwood said at the launch of the TV show. "There are actual things happening with women's reproductive rights in our own country that make me feel like this book is bleeding over into reality," added Emmy-winning actress Elisabeth Moss, the lead character in the series.

Read more: Anyone who writes a book is an optimist, says author Margaret Atwood 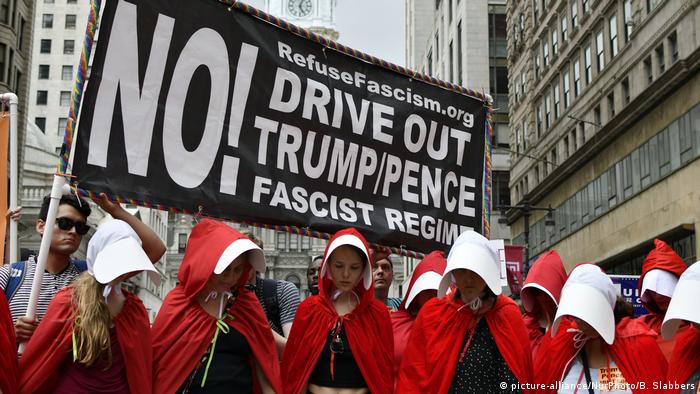 The stark, red costumes from the TV show have become emblematic of the current women's rights movement

May the book open

But Atwood's dark narrative in The Handmaid's Tale and her other works focus just as much on themes of courage during hopeless times, lending women and minorities inspiration to keep defending their rights.

The fact that pre-orders for The Testaments — the long-awaited sequel to The Handmaid's Tale — were placed months in advance before the book was even printed is proof enough that readers seek to find comfort in Atwood's novels during times of uncertainty.

But it's not just the fans that place such confidence in Margaret Atwood's sequel. The jury for the 2019 Booker Prize shortlisted the book as a nominee a week before it was published, calling the novel "terrifying and exhilarating." Meanwhile, MGM Studios and streaming platform Hulu confirmed to the Agence France-Presse news agency that they already are working on an adaptation of The Testaments — while the fourth season of The Handmaid's Tale is also already in pre-production.

The new volume is set 15 years after the events that took place in The Handmaid's Tale and is told through the perspective of three different narrators — none of which reportedly are Offred. With Atwood having worked as a consultant on the TV series in recent years, it is expected that this gap in the timeline and the departure from Offred's voice is deliberate so as to avoid clashing with the nail-biting plot of the second, third and fourth seasons of the TV show.

Read more: How TV is refining its secret recipe

Blessed be the book launch

Meanwhile in London, you will catch a glimpse of people dressed as handmaids at various locations during the book launch event, anticipated to be one of the biggest of its kind this year. Bookshops across the British capital will open their doors at midnight on September 10 to let excited crowds of fans in to get their hands on The Testaments, as hundreds of thousands of first editions have been stockpiled. 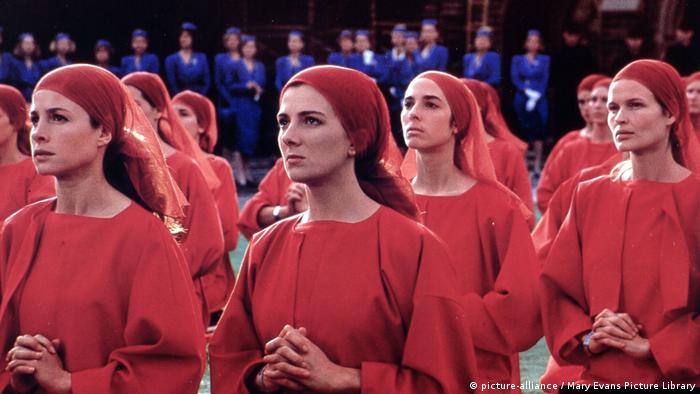 Waterstones, the UK's largest chain of bookshops, is in fact planning more than 30 simultaneous launch extravaganzas across the country that night, where scores of actors have been hired to dress up as characters from Gilead as part of an immersive theater experience during the book launch. Merchants in Canada and the US are planning equally impressive events to celebrate the arrival of the novel.

Atwood herself will attend one of the London events at Waterstones in Piccadilly as the first of a series of global stops as part of her book tour. Her next stop at London's National Theatre the following day will be livestreamed to more than 1,000 movie theaters around the world and has been sold out for months. The last time the National Theatre sold out in this manner was for a talk by former First Lady Michelle Obama. This might well be the most spectacular book launch since the publication of the last Harry Potter volume more than a decade ago. 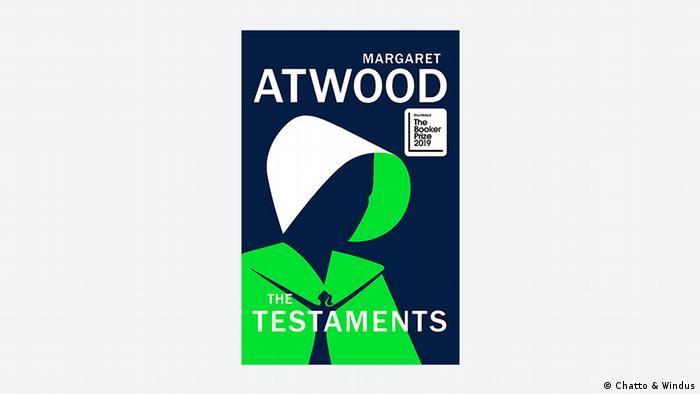 A few copies of the book have meanwhile been "leaked" to the public a week before the colossal launch — by none less than global online retailer Amazon, whose book-selling branch is the backbone of its business. About 800 copies were reportedly shipped early to costumers in the US. Some have even claimed this may have been deliberate — to get more people talking about the book as part of a marketing ploy.

While a first chapter has been released online a week before the launch date, little has been revealed about the plot of The Testaments.

Here's what Atwood had to say about the sequel when she announced that she was working on it last year: "Everything you've ever asked me about Gilead and its inner workings is the inspiration for this book. Well, almost everything! The other inspiration is the world we've been living in." There is little room for interpretation as to what kind of events in the real world may have inspired the Booker-Prize winning author, who is an outspoken supporter of the Women's March movement.

Many of her fans regard Margaret Atwood as an erudite prophet among dystopian writers, a master at putting into words just how easily democracy can be dismantled around the world.

But, Atwood says, "you write these books so they won't come true."

The Testaments is published by Chatto & Windus, part of Penguin Random House's "Vintage" division, on September 10, 2019.

Donald Trump has drawn sharp rebukes after initial comments suggesting women be punished for having an illegal abortion. The US presidential hopeful then backed away from his comments. (31.03.2016)