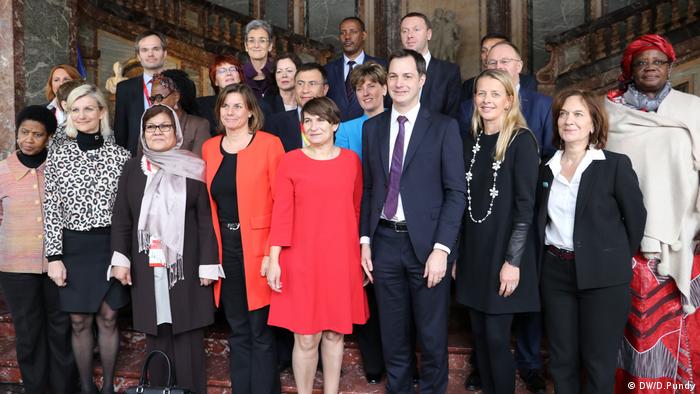 Law student Mariame Keita will be at the United Nations General Assembly in October, proudly representing Belgian youth as she campaigns to put women's health and rights at the forefront of the international agenda. But the confident 21-year-old nearly breaks down in tears when she thinks of her 19-year-old cousin, pregnant in Guinea, ostracized by her family for breaking the taboo of premarital sex, fearing abandonment by her partner. "It's so sad to see," an emotional Keita said in an interview with DW. "I'm really happy that I had sex education, that I have contraceptives, that I know what we're talking about." 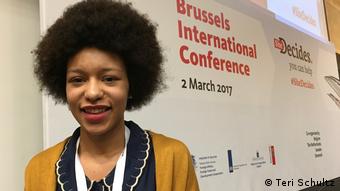 Belgian law student Mariame Keita worries about her pregnant teenage cousin in Guinea who had no access to sex education. Keita will represent Belgian youth at the UN General Assembly in October.

Keita told her cousin's story at the Belgian government-hosted funding conference for a new global pro-choice coalition called "She Decides", a response to US President Donald Trump's slashing of financial assistance to organizations that offer abortion or abortion counseling.

Five weeks after it was launched by Dutch Foreign Trade Minister Liliane Ploumen, the initiative has grown to almost 50 countries plus numerous organizations and foundations. With pledges from governments and institutions, plus $50 million from an American donor who wants to remain anonymous, the one-day drive raised a total of 181 million euros ($190.34 million).


"For me it's very real what we're talking about here today," Keita told DW later, thinking of the Guinean side of her family. "Last summer I was asking [my cousin] if she had a boyfriend and she was so happy; I didn't think about the fact she wouldn't know about contraception because it's so natural for us here."

Keita's relatives are among the estimated 225 million women around the world whose access to family planning was already virtually non-existent, now threatened further by the US measure known as the "Mexico City policy" or, more colloquially, the "global gag rule". Trump issued the executive order on his first day in office, expected to deprive contraceptive and reproductive service providers globally of some $600 million over the course of his four-year term.

The US is the largest bilateral donor of family planning funds worldwide, but it's been illegal for decades for US aid to directly fund abortions. While previous Republican presidents have also invoked the restrictions, Trump has expanded itso that even organizations that use their own funds for any activities related to abortions will lose US assistance across the board.

Staring down the shortfall

Marie Stopes International (MSI) is one of those providers that needs global support to provide its services around the world and reacted with alarm to the move. "This effectively means NGOs forfeit all US aid if they so much as tell a woman abortion is a legal option in her country, refer her to another provider or advocate for abortion rights with their own alternative resources," MSI explained in a statement.

Speaking at "She Decides", MSI CEO Simon Cooke said the penalties would not change MSI's commitment."Denial of right to abortionand refusal to acknowledge it doesn't mean it goes away," Cooke said. "At MSI, we refuse to look away -- we refuse to look away." The organization projects that by the end of the Trump administration, without alternative funding, the ban will create the problems the administration purportedly wants to curb, causing 6.5 million unintended pregnancies, 2.1 million unsafe abortions and 21,700 maternal deaths.

Germany is among the governments that did not make a pledge. That didn't sit well with Renate Bähr, executive director of Deutsche Stiftung Weltbevölkerung (DSW). Bähr expects the US decision to have "catastrophic consequences" for some of the world's most vulnerable communities. "We need governments – like those today – to stand up and attempt to bridge the yawning funding gap," Bähr said. "That is why we are calling on the German government to join this movement and increase its funding for sexual and reproductive health.”

Despite the difficulties caused by the Trump Administration's decision, Michelle Milford Morse of the UN Foundation assured attendees there is room for progress on this issue in Washington. "There's been a bipartisan tradition of supporting this funding for many years," Morse reminded.

Replacing "global gag" with "Global HER"

She noted in particular that Senator Jeanne Shaheen has introduced the Global Health, Empowerment, and Rights (HER) Act, which would end the 'global gag rule' permanently. "It has 47 co-sponsors in the Senate and it is a bi-cameral and bipartisan bill," Morse told DW. "Right now we are helping to make sure as many members of Congress sign it as possible."

Ploumen and her co-founders were clearly delighted with the response, while acknowledging there's plenty more to be done with a gap of millions of dollars left. Ploumen said many governments were still looking at what they could contribute and that participants would continue to push themselves and others. However, she said, "if every beginning was as good as this one, life would be different for everyone."

Donald Trump has sent shockwaves in his first few days as US president with a number of far-reaching executive orders and memoranda. DW examines what they mean. (31.01.2017)

World in Progress: Millions of women impacted by gag rule reinstated by new US president