German Fans Under the Spell of Harry Potter in English | Germany| News and in-depth reporting from Berlin and beyond | DW | 20.07.2007

For those purists wanting to protect the German language, turn away now. The new Harry Potter book comes out in English in Germany on Saturday and German fans will not be waiting for the translated version. 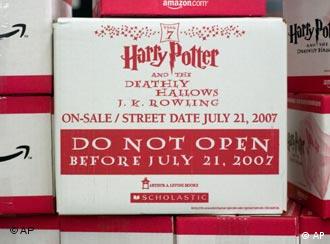 While there has been some discussion about doing away with what some conservatives call "unnecessary" usage of the English language in Germany, the Germans have not gone as far as the French in making a stand to protect their mother tongue.

Many Germans bemoan the fact that a hybrid commonly known as "Denglish" has crept into their society, but there has yet to be a concerted effort to establish any German equivalent to France's protectionist institution, the Académie française.

Those thinking of pushing for the creation of such an institution and the eventual eradication of Anglicisms in Germany may yet have their day, but they continue to bide their time -- and wisely so.

Why? Because had they managed to beat back the English incursion between the publication of 2005's "Harry Potter and the Half-Blood Prince" and the final installment, "The Deathly Hallows" -- the English version of which goes on sale in Germany on Saturday -- they would have been left at the mercy of tens of thousands of would-be wizards and witches calling for their Muggle heads.

Nothing stands in the way of a Potter fix 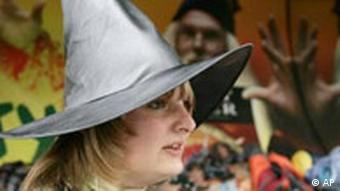 They're a dedicated bunch these Harry Potter fans

Language purists, however, are clever enough to know that turning Germany into a land where an English book would be held back for publication until the German one had been launched is simply too premature. Nobody wants to be responsible for wand-waving pandemonium across the nation. And who would want to be forced to quiver behind barricades and huddle behind locked doors for purely linguistic reasons?

Such is the demand for the seventh and final book in the phenomenally successful Harry Potter series that German fans are laying in wait to snap up the first run of the English publication despite some readers having only a limited understanding of the language in its written in.

The expectation over how the boy wizard's story comes to its conclusion is so intense that Potter nuts across Germany are refusing to wait the three months until the German translation is released.

"Anyone with a reasonable command of English doesn't want to wait until Oct. 27 when the German version is due to appear," Heinrich Riethmüller, manager of the Osiander chain of book stores, told reporters.

Fans waiting for the witching hour 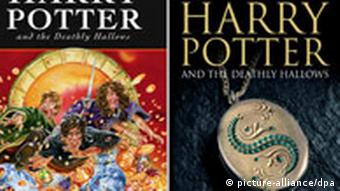 Many will grab a copy regardless of their English skills

Online orders of the English version of "Harry Potter and the Deathly Hallows" have passed the 170,000 mark in Germany while many thousands of fans are preparing for a night on the streets waiting for the bookshops to open as the chimes strike twelve.

Some stores are even throwing special midnight Harry Potter parties for those fans who plan to storm the shelves once the clock passes the witching hour.

Literary observers believe that the popularity in Germany of the Harry Potter books in their original language has much to do with the fact that many fans have grown up with the series, reading each book as it came out and improving their English along the way.

Sixth book made history in Germany

The first real sign of the clamor for Harry, Ron, Hermione and friends in English came with the release of the "Half-Blood Prince." 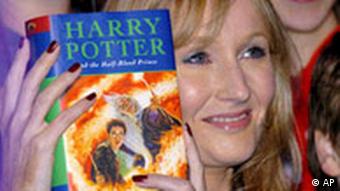 The sixth book became the first English-language book ever to make it into the German best-seller list.

"The seventh book will do even better," said Riethmüller. "It's bound to enter the best-seller list."

Dealers estimate that total sales of "Harry Potter and the Deathly Hallows" will top the three-million mark in Germany.

The defenders of the German language may be rubbing their hands over the fact that J.K. Rowling has now completed her odyssey. They may now feel free to slowly squeeze the English language out of Germany without magical reprisals. But time will tell. Harry's story may have come to an end but it is unlikely the spell of reading in English will be broken for a generation who followed his adventures in a foreign tongue.

A school in the eastern German city of Chemnitz has taken the Harry Potter books off its syllabus, after Christian parents objected on religious grounds. (22.03.2007)

Germany's Christian Social Union (CSU) wants the German language to be protected in the country's constitution by a "linguistic law" which will keep the spread of English words at bay. (13.05.2006)

Fast becoming Europe's lingua franca, English has invaded other national languages. The trend has some on the continent worried that languages might in the future take second place even within their countries of origin. (01.12.2004)