Hundreds of thousands of protesters gathered in Washington, D.C., for the Women's March in defiance of new US President Trump. Organizers said thousands more attended 'sister marches' around the world.

'Sister Marches' around the world against Donald Trump

The Women's March on Washington flooded the heart of the US capital on Saturday,  just a day after President Donald Trump's inauguration, in a show of disapproval for the new US leader. The protest billed itself as a demonstration against misogyny, racism, homophobia and religious intolerance.

City officials said organizers had doubled their initial turnout estimate to 500,000 people as protesters in pink hats took over the city, overflowing metro stations. The Washington metro reported 275,000 trips had occurred in the city by 11 a.m. (1600 UTC) compared with 193,000 one day prior on Trump's inauguration. 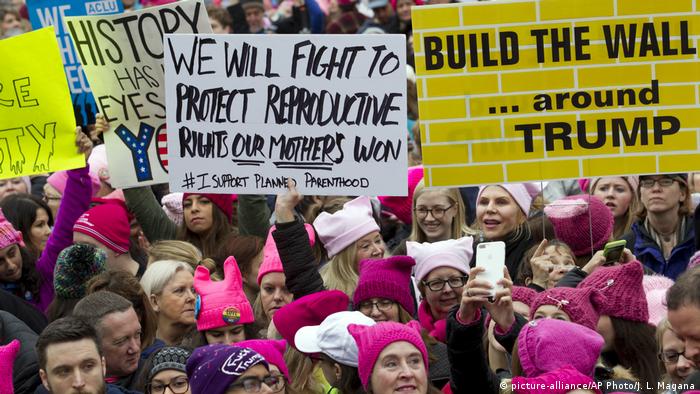 There were a variety of banners on display in Washington

DW's US correspondent Ines Pohl was at the march as estimates of the Washington attendance on the rally rose to 600,000:

The event began with a rally and speeches from celebrities, activists and politicians including feminist writer Gloria Steinem and actress America Ferrera. Pop star Madonna said "Good did not win this election, but good will win in the end." Actress Scarlett Johansson’s speech focused on Planned Parenthood while documentary film maker Michael Moore called for new leadership of the Democratic Party.

"This is an outpouring of energy and true democracy like I have never seen in my very long life," Steinem, an 82 year-old pioneer of the feminist movement in the United States, told the crowd.

Following the speeches, protesters walked down Independence Avenue. Simultaneously, thousands attended parallel rallies in Boston, New York City and Chicago. The rallies were on an unprecedented scale and far eclipsed the turnout for President Trump's inauguration.

DW's David Raish was on Constitution Avenue in Washington DC where the march stretched all the way down the street:

Marches around the world

Protests in solidarity with the Women's March on Washington took place around the world ahead of the main protest in the US capital.

At least 673 "sister marches" were planned with over two million people registered to take part in the demonstrations, organizers said on their main website ahead of the rallies.

In Germany, people assembled on the streets of Frankfurt and in front of the Brandenburg Gate in Berlin in support of women's rights and diversity. Seven registered "sister marches" took place in Germany on Saturday including in Munich, Düsseldorf, Berlin, Frankfurt and Bonn.

"Mr. Trump, you are no Berliner," signs read at the rally outside the US Embassy in Berlin.

Police estimated around 2,100 people took part in the women's march in Frankfurt, DW's Mara Bierbach reported from the scene.

Like other marches around the world, the Frankfurt protest drew a diverse crowd with people giving a host of reasons for marching. Some called for protection for women's rights, press freedom and the environment while others urged for more kindness and intersectional feminism.

"Together, united, we'll never be divided," chanted around 100 protesters in Bonn, reported DW's Ole Tangen Jr. from the sunny protest. 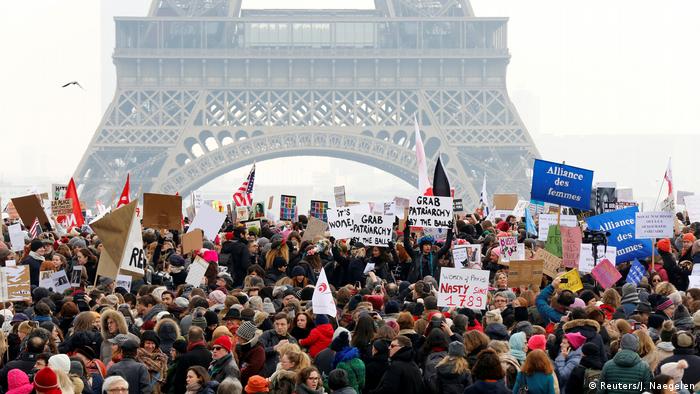 In Sydney, Australia, tens of thousands gathered at Hyde Park in the city center while a march in Melbourne drew around 7,000 people.

From Stockholm, Sweden, to Nairobi, Kenya, women and men donned pink hats and assembled in solidarity with the D.C. march.

"It's a journey to equality but we're in together," wrote one social media user at a solidarity march in Nairobi.

Around 80,000 gathered in London while thousands of others met in Paris to march for women's rights. "Today London joins the world to show how much we value the rights every woman should have," said London mayor Sadiq Khan.

The main event in Washington, started by Hawaiian grandmother and retired lawyer Teresa Shook, was intended as an outlet for women and men to vent their frustration and anxiety over Trump's victory and fears that his administration will roll back advances in rights for women, immigrants, Muslims and LGBTQ people.

The marchers intended to send a message of unity and diversity to Trump after a campaign in which he called Mexican immigrants "rapists," vowed to ban Muslims from entering the US, and was revealed to have once bragged about grabbing women by their genitals and kissing them without their consent.

He also fat-shamed a former beauty queen and dismissed over a dozen sexual assault and misconduct allegations by calling his accusers "liars."

Many of the protesters wore knit pink hats with cat ears - referred to as "pussy hats" - in an attempt to claim back the derogatory term for female genitalia that Trump used when talking about groping women.

'Sister Marches' around the world against Donald Trump

Iranian forces are arbitrarily arresting civil society activists, journalists and anyone who protests against the regime in order to rein in the outcry over the death of a young woman who died in police custody.