US women prepare for future without legal abortion

As US states make it ever more difficult to get an abortion, pro-choice activists gear up for court battles. Many are also bracing for a "post-Roe" America, where women might have to take abortion into their own hands. 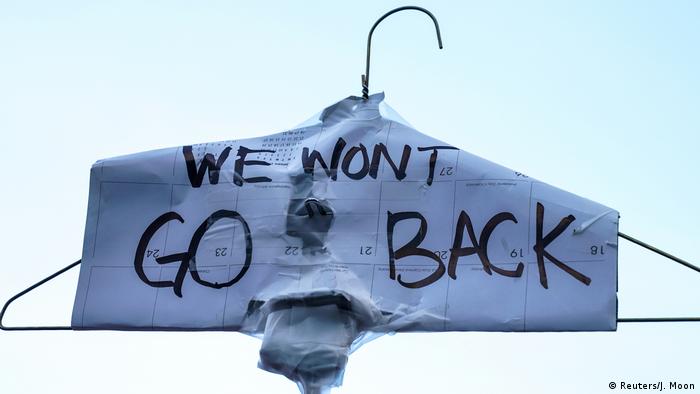 The setting couldn't be more innocuous: a quiet meeting room at a library in Washington, DC. It's a weekday evening, and teenagers are huddled in study groups. The only thing that distinguishes the group I am sitting in on from the rest is the ratio of women to men: 25 to one, and the leaflets they hold in their hands: information about how to carry out an abortion without a health care provider, using a pill called Misoprostol. The medication is most commonly used to treat ulcers — but in many countries where abortion is illegal, it is also a drug that women seek out to carry out the procedure themselves.

Now, with abortion restrictions sweeping southern and Midwestern states in the US, and a newly conservative Supreme Court, which could overturn the landmark Roe v. Wade ruling, establishing a constitutional right to abortion across the country in 1973 — information sharing meetings like this one, appear to be the latest frontier to protect bodily autonomy.

"Educate yourself about how to safely end a pregnancy yourself, because Roe died in 2016," Erin Matson tells the audience, with an activist's adamancy in her voice. You soon get the sense that the co-director of Reproaction, a group aiming to increase abortion access, has had to defend her rationale before. "The reality of the situation is that people always have and always will find ways to end their own pregnancies." 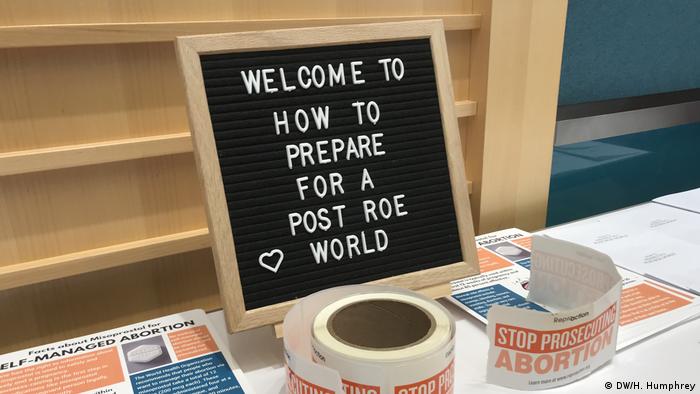 In the past, that meant dangerous visits to backstreet abortionists or women turning to horrific implements like coat hangers. In Alabama, where access to abortion has been dwindling for years, a clinician explained to me how she had recently treated one young woman so desperate she had resorted to swallowing bleach tablets in an effort to end her pregnancy. It is cases like these that have mobilized the panelists — policy advisers to abortion fund managers to youth group social workers — to share information about what they consider to be safer options for self-managed abortion before 12 weeks, using World Health Organization protocols.

Like many things facing prohibition, the internet has also become a home to the pro-choice resistance. It is on Reddit where I first find evidence of a revived "Auntie Network," an underground movement that first flourished in the pre-Roe era — women helping other women to obtain abortions across state lines.

"I, your cousin/bestie Andreya could like to have come for a visit here in good old Nebraska/Western Iowa! You're welcome to stay here a long as you need and I'll provide you with transportation anywhere you'd need/want to go," reads the first post I come across — the subtext being that the Reddit user is offering their home as a base for women to stay if they have to travel out of state to seek an abortion. The post also offers to send a "birthday card" containing pills such as Misoprostol.


The revival of so-called Auntie Networks online isn't welcomed by everyone working under the banner of the pro-choice movement, however, with some activists raising concerns about the creation of new and unvetted offshoots, when a well-organized framework, like abortion funds, already exist.

"It's not something one person can do. We're stronger when we work together to build collective power and connectivity," Lindsay Rodriguez from the National Network of Abortions Funds says. "The reality is that for most communities, there are people who've been aware of these injustices for a while. We're concerned that duplicating efforts that are already underfunded will actually make it harder for people who are seeking abortions."

Many of these funds point out that while the Auntie Collective puts women up, it doesn't cover the cost of the procedure itself. Currently, these funds are engaged in making sure women know that abortion and funding is still available, despite the wave of legislative efforts around the country.

When I call one of them I am first greeted by a switchboard directory. "Hello, you have reached the Yellowhammer fund. Even though Governor Ivey signed HB314, abortion is still legal and available in Alabama. If you need funding for an abortion please dial extension 1."

Nevertheless, outrage and individual offers of assistance continue. "Dear sisters. We cannot do anything about the way you are being treated in your home state," wrote Shelly O'Brien, the manager of a small hotel in Michigan on Facebook last month, where a so-called heartbeat bill will also go before the state lawmakers. "But, if you can make it to Michigan, we will support you with several nights lodging, and transportation to and from your appointment."

O'Brien says she has received a torrent of abuse online but insists her offer is still open. "The only way this is going to change is if people are willing to risk something." 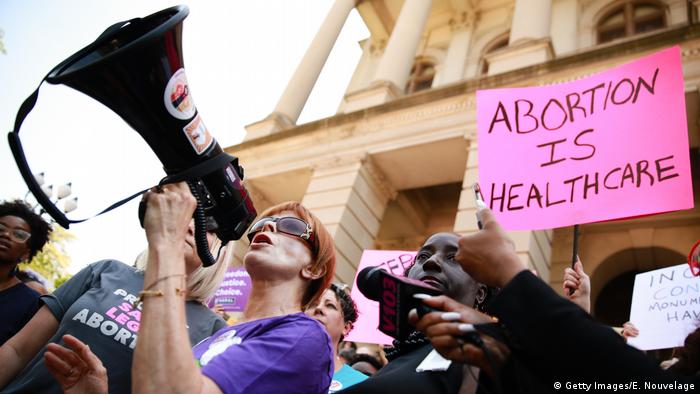 Indeed, it seems that the Aunties and women considering self-managed abortion are risking something — namely, the prospect of criminalization. "I want to say this," Erin Matson stresses, addressing the group gathered in the library meeting room in DC, "There is no test in the bloodstream which shows that Misoprostol has been used orally. The treatment for complications is the same treatment as for miscarriage. You will get the same standard of care if you talk about miscarriage, but by talking about abortion you may put yourself at risk of prosecution."

A similar reminder is issued on a leaflet which has been given out. "At least 20 women have been arrested for ending their pregnancies," it reads.

As the discussion wraps up, it becomes clear that the internet could present a new road for prosecution not seen in the pre-Roe era. "If you have a miscarriage but you googled about self-managed abortion, you could be criminalized for that," warns Brooke Butler from the DC Abortion Fund. "That is where we are heading."

DW send out a selection of the day's news and features. Sign up for it here.

Alabama gears up for abortion fight activists thought was history

As Alabama passes the country's most restrictive abortion law, activists who believe in a woman's right to terminate her pregnancy are bracing for a battle. The Supreme Court could end up deciding the matter. (16.05.2019)

A fierce debate is raging in the US over whether women should have the right to terminate pregnancies. The opposition to abortion is driven by misogyny, hypocrisy and ignorance of the facts, says DW's Christina Bergmann. (15.05.2019)

Women seeking an abortion in Turkey face considerable danger and many hurdles. While the procedure is legal, experts say in reality there is a de facto ban, believed to be orchestrated by President Recep Tayyip Erdogan. (27.01.2019)