Women seeking an abortion in Turkey face considerable danger and many hurdles. While the procedure is legal, experts say in reality there is a de facto ban, believed to be orchestrated by President Recep Tayyip Erdogan. 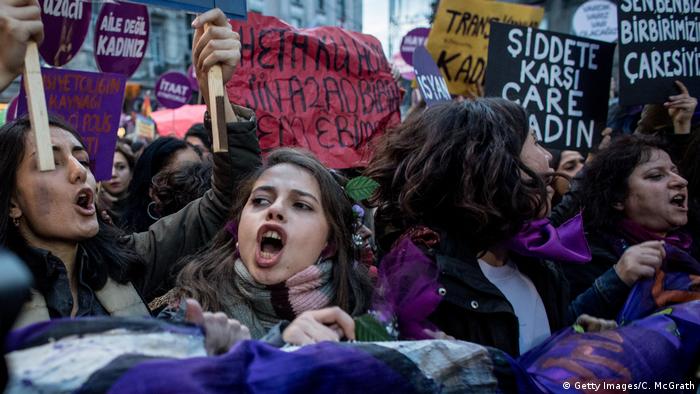 "I thought I'd go to some sort of hospital. But instead, it was an apartment on the second floor of a three-story building. A man with a cigarette in hand opened the door. I entered an apartment with a living room and kitchen. The bathroom in what apparently was the parents' bedroom had been converted into an abortion room. The operating table was filthy and covered in blood."

Horror takes hold of Gul as she describes the place in Istanbul's Alibeykoy district where she went to have her pregnancy terminated. What she encountered was one of Turkey’s illegal abortion clinics, often housed in converted apartments despite the procedure being legal in Turkey.

Turkish law states: "Until the end of the tenth week of pregnancy, as long as there are no concerns for the mother's health, an abortion can be performed out at her request." It also stipulates that in exceptional cases, terminations can be carried out until the twentieth week of pregnancy. But in reality, the situation is very different.

Read more: Women in Turkey against a one-man regime

DW contacted several hospitals, but no representatives were willing to comment. Instead, only scarce information is available. For example, at a hospital in the Black Sea coastal city of Rize, abortions only take place in exceptional cases. But there is no official justification for the stance, only the terse "We simply don't do that." At another public hospital in Nevsehir, central Anatolia, abortions are only carried out in cases deemed by a doctor to be particularly "dangerous to health." A private hospital in Gaziantep, in eastern Turkey, openly states: "We are not allowed to carry out abortions. The ministry of health forbids it," but the federal authority contradicts this claim by referring to the legal framework.

For 30 years, Nursen worked as a nurse. "Fewer and fewer abortions are taking place in public hospitals. Some say that the women would be able to access them, but then the hospitals give women an appointment several weeks later. Hospitals that organize abortions can be put under pressure. The aim is to prevent abortions by altering the allocation of tasks within hospitals or by enforcing stricter controls of their budgets."

Nursen, who is now retired, speaks of an incident in a public hospital on the Asian side of Istanbul: "An unmarried pregnant woman came to the hospital resolute to have an abortion. The head nurse and doctor then visited the woman at home and instead persuaded her to keep the baby. And that's what she ended up doing."

G. worked as a nurse in the maternity ward of a public hospital for two and a half years. She says women there were instead referred to private hospitals for terminations: "Women could not receive an abortion. Perhaps only if they knew someone working in the hospital."

According to a study by Kadir Has University in Istanbul, public hospitals in 53 of Turkey's 81 provinces reject an abortion request if it comes only at the pregnant woman's request. In the regions near the Mediterranean and the Black Sea, abortions are no longer permitted in any hospitals. Across the entire country, only 7.8 percent of the total of 431 public hospitals allow abortions to be performed when solely at the request of the woman and 11.8 percent refuse outright to perform the procedure as a matter of principle.

University lecturer Mary Lou O'Neil says this de facto lack of access to abortion services is very problematic. "If a woman is seeking an abortion but is unable to receive one, it is a violation of her rights. Women with little money have it particularly hard under the governmental restrictions."

Another significant hurdle comes in terms of affordability: Even if a woman can access abortion, the costs of the procedure vary and are often far too expensive. A private clinic informed DW that it charges 900 Turkish lira (€150, $171) for procedures performed up until the sixth week of pregnancy; each additional week costs an additional 100 lira. At this rate, a termination of a pregnancy after the tenth week costs 1,600 lira (approximately €270), which is no small sum in Turkey — a country where average household incomes are far below the European average and only around one-third of women are in the workforce.

A midwife in one of Istanbul's public hospitals, who wishes to remain anonymous, points out that the state does not cover the costs of abortions performed at the woman's request. Moreover, she said, the system governing who can perform abortions is complex and riddled with hurdles for hospitals, so they simply "decide it is better not to carry them out." The doctors at the hospital where she works are only able to perform an abortion if the welfare of the mother or child is at grave risk. Otherwise, women are referred on to other hospitals or facilities.

Read more: Half of all abortions worldwide are unsafe

Women’s rights of the future at stake

Sule Dursun works in Turkey’s Foundation for Family Health and Planning. She cites political motivation as the reason for the many restrictions women encounter: "Behind this de facto ban is panic because the population is no longer growing as quickly."

In 2008, then-Prime Minister Erdogan declared that every woman should have at least three children. In 2012 he clearly stated his stance on abortion: "To me, abortion is murder." And the Turkish government's "Tenth Development Plan" — the Erdogan government’s 2014-2018 set of goals for the future of the country — paves the way for a gradual acceleration of population growth, a clear indication that the government is attempting to curb the country's falling birth rates.

But what does this mean for family planning awareness? Time and time again in her educational programs, Dursun meets women who are uninformed when it comes to contraception methods — also an issue that hospitals do not want to take up: "The atmosphere is increasingly conservative, and this is also reflected in the healthcare system. There is no information and, at the same time, a de facto ban on abortion. So women are simply stuck."

Amnesty International has highlighted the growing role of women in the global fight for human rights in a new report. But it slammed "tough guy" leaders for the policies that make such activism necessary. (10.12.2018)

The wife of President Recep Tayyip Erdogan, Emine, has praised the harem as an "educational establishment" during a speech. Her husband had also made controversial remarks on motherhood on International Women's Day. (10.03.2016)