Germany′s evacuation of underage refugees from Greece seen as insufficient: aid groups | Europe | News and current affairs from around the continent | DW | 18.04.2020

Some 50 unaccompanied refugee children have been flown to Germany from Greece despite COVID-19 concerns. Critics say the number is paltry and the EU is leaving Greece on its own as it hurtles toward another catastrophe.

From refugee to politician: Afghan woman elected to Hamburg Parliament

Athens Airport is usually buzzing with tourists and business travelers this time of year. In 2019, it posted record numbers of visitors and looked set to best them once again in 2020.

But since the novel coronavirus arrived, the airport has been eerily empty — even now, during Orthodox Easter celebrations, which take place one week later than those in much of the rest of the Christian world. One of the few planes allowed to depart this Easter Saturday is heading to Hanover, Germany.

Though the flight was originally scheduled to transport 58 unaccompanied underage refugees, it is only carrying 47. The others were deemed too ill to fly. Officials say the illnesses are not coronavirus-related and that those unable to board will be flown to Germany at a later date. On Wednesday, another 12 minors were flown to Luxembourg, despite strict travel restrictions due to the coronavirus.

Though many observers welcome the move, it is clear that the paltry number of children being evacuated will do nothing to alleviate the overcrowding in Greek refugee camps.

The European Union (EU) actually promised to evacuate as many as 1,600 of the unaccompanied underage refugees currently stuck in Greece. But then came the coronavirus and receiver countries including Germany decided to stop all refugee entries in mid-March.

When asked by DW at the time, Germany's Interior Ministry said the decision would not affect children the government had promised to evacuate. Then nothing more happened.

The fact that 70 children have now been given permission to leave Greece is looked upon as nothing more than a polite gesture by many aid organizations. Most say they had hoped for more significant action in light of the fact that the awful situation in Greece's refugee camps has continued to worsen by the day.

Words offered Saturday by Germany's ambassador to Greece, Ernst Reichel, will have done little to soften the sting of that disappointment. Speaking to journalists, Reichel explained that Germany will eventually welcome between 350 and 500 refugee minors, though he could not say when.

Read more: How do you give refugee children a new home? 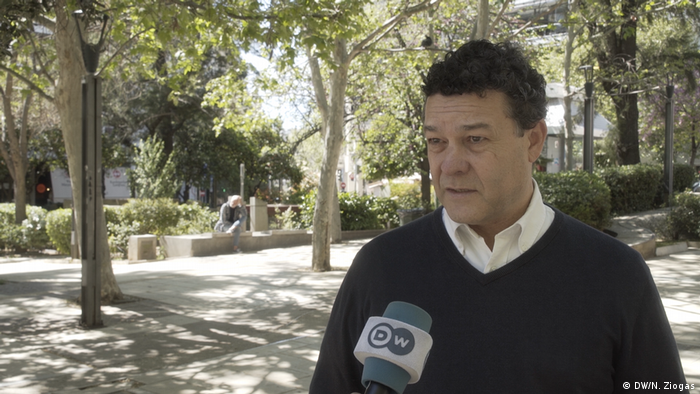 For Philippe Leclerc, representative of the United Nations High Commissioner for Refugees (UNHCR) in Greece, the flight is a positive first step at a time when most EU countries have stepped away from their initial promises to take in young refugees.

Leclerc greeted the news that action was finally being taken to concentrate on getting children under the age of 14 out of the increasingly overcrowded camps and off to Western Europe. He expressed confidence that after months of pleas for help, many more children would be flown to Germany and other countries where they could be safely looked after in the near future.

The UNHCR representative said the evacuation of such unaccompanied children is critical: "The situation, especially on Lesbos, Samos and Chios, has been insufferable for more than a year now. The Samos camp is currently filled to 11 times its capacity." 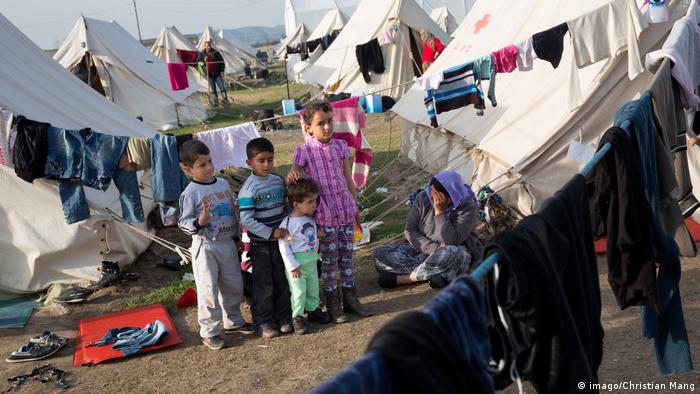 Refugee camps, like this one in Nea Kavala, Greece, are overcrowded and ill-equipped

He said such circumstances were utterly unacceptable, especially as the coronavirus pandemic rages. He warned that Greece could not be left to deal with the problem on its own, instead calling for EU countries to show solidarity and share the burden.

It remains to be seen whether Leclerc's hopes will be fulfilled. For years Brussels has been quietly ignoring the festering problem, preferring instead to count on its so-called refugee deal with Turkey to keep refugees away. It was not until Ankara announced it would unilaterally withdraw from the deal in late February — sparking a rush of refugees and asylum seekers at the Greek border at Evros — that the EU was once again confronted with the urgency of resolving the vexing problem.

Will the coronavirus crash the Greek economy?

Vasilis Papadopoulos, president of the Greek Council for Refugees (GCR), however, has other concerns. He is looking beyond the coronavirus and what he sees scares him. He fears Greece could be heading for yet another financial crisis as a result of strict lockdown measures in the fight against infection. He says the situation is tense, adding, "There will be integration problems."

Papadopoulos says the current situation is hitting children hardest: "More than 1,000 unaccompanied minors don't have a permanent roof over their head, not to mention a total lack of schooling or long-term perspectives. 300 of those minors are currently in police custody." He says any evacuations, even in such small numbers, help — but he warns that time is of the essence. The fact that Greece is in a state of emergency has only served to make the situation more difficult.

Currently, citizens are not allowed to leave their houses without good reason. Those stopped on the street without one must pay hefty fines. These were doubled from €150 to €300 ($163-$326) this week in an attempt to keep people from spreading COVID-19 by visiting friends and family this Easter weekend. That is also why the government closed all freeways to passenger cars. The government in Athens is proud that such strict measures have helped keep infections in check thus far.

The streets of Athens and Thessaloniki are deserted, patrolled only by police checking pedestrians' papers. Coronavirus stories dominate the news and reports of a small number of refugee children being evacuated to Germany garner little attention. Prior to the pandemic, however, that announcement would have caused outrage.

Now Greeks are only worried about whether refugees are following government restrictions and whether the virus could spread into refugee camps — and then beyond to the general population? Recently, after weeks and weeks of inaction, the Greek government announced it would begin evacuating some 2,300 at-risk refugees from the camps and into hotels — if need be, against the wishes of hotel owners.

Among Ukrainian refugees are many young people and unaccompanied minors. One organization in Berlin has focused on evacuating Jewish children from the Ukrainian city of Odesa. While celebrating Purim they try to forget the horrors of war for a little while.