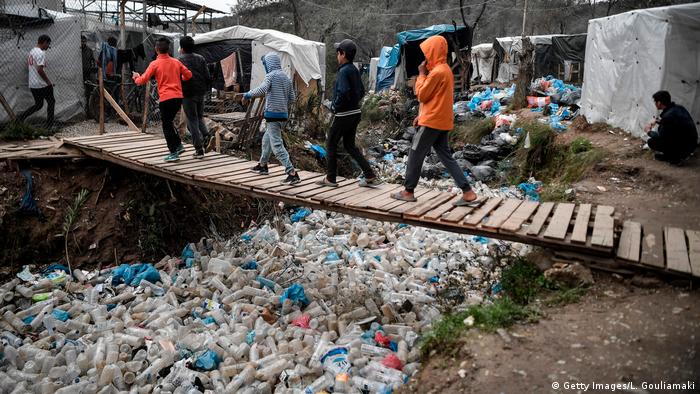 Although the river has run dry, its bed is overflowing: Plastic bags, cardboard and plastic bottles extend as far as the eye can see. A young child, maybe six years old, wades through the garbage. Here, in the so-called "jungle," where makeshift huts crush up against one another and children play in the filth, the squalor of the Moria refugee camp is on full display.

This hot spot, located on the Greek island of Lesbos, has been the scene of Europe's largest humanitarian crisis for years now. A camp originally designed to temporarily shelter 3,000 people, it is now the cramped home of more than 20,000.

The situation is not much better on other islands in the Aegean. In all, some 42,000 refugees and migrants are currently stuck on Lesbos, Chios and Samos, and many have been there for more than a year. Now, the coronavirus pandemic threatens to make the situation even worse. 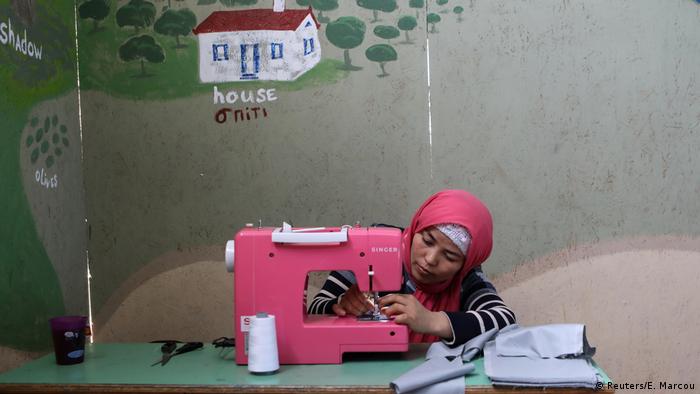 A migrant from the Moria camp sews handmade protective masks, at an NGO on the island of Lesbos.

Just recently, Germany and a number of EU member states, including France and Luxembourg, declared their willingness to take in those in most desperate need of help: Vulnerable, unaccompanied minors and children.

The European Commission estimates that 1,500 unaccompanied children and minors are currently on the Greek isles. Last Friday, EU interior ministers pledged they would be distributed among a "coalition of willing" EU member states within a week.

But that willingness is not only humanitarian in nature, it is also pragmatic. The EU was forced into action when Turkish President Recep Tayyip Erdogan decided to open his country's borders with Greece two weeks ago, sending thousands of refugees rushing toward Europe.

Greek security forces overwhelmed by the sheer number of refugees demanding entry into Europe answered with water cannon, tear gas and smoke bombs. It was reported that at least two people were killed by Greek bullets, something the government in Athens denies. Images of standoffs were quickly broadcast around the world, putting the EU under pressure to do something about the situation.

But the new COVID-19 coronavirus pandemic has changed everything, with EU member states enhancing border controls or closing borders altogether in an attempt to stem the spread of the virus. That was also the reason the United Nations refugee agency UNHCR and the International Organization for Migration (IOM) gave for the temporary suspension of activities at their Refugee Resettlement Program. Thus, for the moment no safe haven can be found for those refugees in especially dire straits — that includes safe haven in Germany.

Asselborn: 'It's not up to us'

The program for taking in unaccompanied children was not supposed to be affected by the situation, at least according to European Commission spokesperson Adalbert Jahnz. He claimed, albeit in vague terms, that the process would go on as planned, but suggested that respecting and navigating the many different steps EU member states had taken to stop the spread of the virus was taking up a lot of time and making it impossible to set out a clear timeline for the transfer of children from Greece.

Jahnz went on to say, "However, I assure you that intense discussions are going on as we speak and preparations are currently underway." Another spokesperson for the Commission, which has agreed to play a coordinating role in the project, told DW the COVID-19 pandemic will likely have an effect on the process.

Germany's Interior Ministry was vague as well, saying only that the European Commission is currently assessing what level of coordination is possible right now in light of the situation. On Wednesday, a statement was released saying the COVID-19 pandemic would "not have any effect on our efforts." Still, speaking with DW on Thursday, Luxembourg's Foreign Minister Jean Asselborn conceded that his country would not be taking in refugee children for now.

"It's not up to us, to Greece, or the UNHCR. In terms of security and health, it is simply impossible to guarantee humane conditions for taking in people during these difficult times," said Asselborn. He said Luxembourg and other EU member states would do all they could in the meantime to prepare for the children to be transferred as soon as possible.

Boris Cheshirkov, a spokesperson for UNHCR Greece, understands that coronavirus will slow the process, but urged the EU to push on with preparations regardless so that they can start transferring children as soon as the time comes.

Many aid organizations have warned that catastrophic sanitary conditions at refugee camps make it imperative to get people there to safer lodgings where they can better protect themselves from illness.

In Germany, celebrities and politicians started online petitions to do just that under the names #WirHabenPlatz (We Have Space) and #LeaveNoOneBehind — so far 80,000 people have signed the appeals.

Those behind the campaigns point to the miserable living conditions at the camps — something DW journalists have frequently documented — pointing to the fact that hundreds of refugees at Moria, for instance, are forced to share just one toilet. It is also almost impossible to bathe at the camps and even the most basic hygienic precautions, such as washing one's hands, cannot be taken.

They also note that there is a severe shortage of doctors at the camps to help with those who may become infected. There is simply no way for the more than 20,000 people crammed into the bursting facility to isolate themselves to avoid contracting the virus.

Hoping to stop an explosion of infections, the Greek government has put its camps under quarantine. Residents are only allowed to leave the camps during the day, and then only in small numbers.

It remains to be seen if that will be enough, though EU Commissioner for Home Affairs Ylva Johannsson is convinced it is. On Thursday, she tweeted that she is working "to make absolutely sure that the health of asylum seekers and migrants in camps on EU territory is being protected."

The more a photo touches the viewer, the greater its effect. These pictures from the Reporters Without Borders' book "Photos for Press Freedom 2021", many taken in dangerous circumstances, are guaranteed to pack a punch.