Germany′s CDU gets boost with surprise victory | Germany | News and in-depth reporting from Berlin and beyond | DW | 06.06.2021 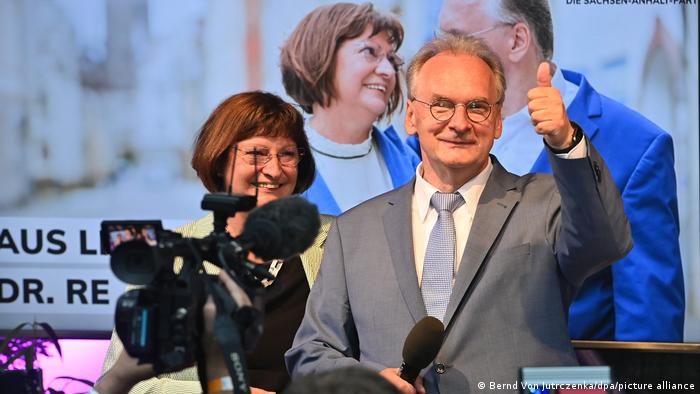 The embattled Christian Democratic Union (CDU) could barely have asked for a better launchpad for September's general election than its surprisingly resounding victory in the eastern state of Saxony-Anhalt on Sunday.

After opinion polls in the last few days put Angela Merkel's center-right party in a neck-and-neck race with the far-right Alternative for Germany (AfD), the CDU pulled a full 16 percentage points clear on election day, according to the projected results, with 37% of the vote — 7 points more than it got in the 2016 state election.

The AfD's 21% was over 3 points down on its 2016 result in the state and a disappointment for a party that has positioned itself as the home of the anti-mainstream protest voter in eastern Germany.

"Of course this puts the wind in our sails for Berlin," Ralph Brinkhaus, the CDU's parliamentary leader, told the public broadcaster ARD. He also suggested the result was a good omen: After all, the CDU's success in the last general election in 2017 had also been preceded by an unexpected regional victory in Saarland a few months earlier.

But as ever with state elections, the weight of local factors casts a doubt on whether the CDU can translate the victory to the national level. For one thing, Saxony-Anhalt's incumbent State Premier Reiner Haseloff appears to have been a major factor in the victory, with his own personal approval ratings high, and his handling of the pandemic (unlike that of the CDU-led federal government under Merkel) largely respected.

Haseloff is also untarnished by the corruption accusations against other CDU politicians, and the doubts raised over the competence of Federal Health Minister Jens Spahn.

Another factor in Sunday's result may have been the electorate's fear of an AfD victory, which appears to have driven many voters to turn to the only party that could beat them, the CDU.

In fact, Haseloff spent the last few days of the election campaign making exactly this point — insisting that a vote for anyone but him would only strengthen the AfD. On Sunday night, all the other parties' candidates were quick to express relief that the AfD had been defeated, many describing the result as an important victory for democracy.

But the CDU should perhaps not read too much into this. The AfD is especially strong in Germany's eastern states. More than 1 in 5 Saxony-Anhalt voters chose the far-right party in Saxony-Anhalt, but the AfD only polls at 12% in the whole of Germany, which means that the fear of its rise is unlikely to play a major role in September.

Meanwhile, the CDU hopes that Sunday's success might boost their embattled top candidate Armin Laschet. Even in Saxony-Anhalt, a survey by pollster infratest dimap showed only 18% of people said they thought he would make a good chancellor, putting him behind his two main opponents in the Greens and the SPD.

The Greens, meanwhile, lost their momentum on Sunday after spring's election victory in the southern state of Baden-Württemberg. Some national polls have put the Greens on equal footing with the CDU, with Annalena Baerbock proving a popular chancellor candidate compared to her CDU counterpart, Laschet.

Though the Greens did increase their 2016 vote-share by a sliver — up to 6% from 5% — the environmentalist party missed their own target of scoring double-figures in the state. "We stood for stability, to maintain the democratic center," Baerbock told ARD.

In truth, the Greens did not seem to expect to make big gains in the small state with its 2.2 million inhabitants. The region's coal industry has lost jobs through Germany's energy transition, which the Green party supports, and Baerbock herself hardly made any appearances in Saxony-Anhalt leading up to the election.

The Greens may also have scored an own goal in the days before the election when Baerbock proposed a plan to raise Germany's gasoline price by €0.16 per liter ($0.19). That was, as pundits noted, unlikely to be a popular policy in a state with an extremely low population density where many people live far from urban centers.

Baerbock did not subscribe to that theory. She made the case that potential Green voters were simply more likely to vote for the incumbent CDU when there was a real threat of a far-right victory. "We have seen that in other eastern German elections," she said.

The Saxony-Anhalt result looks especially painful for the two left-of-center parties — the Social Democrats (SPD), who ended on only 8.4%, and especially the Left party, which lost fully a third of its vote share and ended the evening on its lowest score ever: 11%.

There was good news for the pro-business FDP, who re-entered the Saxony-Anhalt parliament after a ten-year absence, and whose resurgence has been a feature of the "super election year" so far. "This is a good evening for Free Democrats in the whole of Germany," party leader Christian Lindner told reporters. Some observers suggested that the FDP's criticism of the coronavirus restrictions may have paid off on Sunday.

Coalition building — a model for Berlin?

Saxony-Anhalt's premier now has several relatively comfortable coalition options: At the moment, his likeliest choices are either to continue the three-way coalition with the center-left Social Democrats and the Green party, or team up with a reinvigorated Free Democratic Party (FDP) and the Greens.

The latter might be the preferred choice of Laschet, who currently leads a coalition with the FDP as state premier of North Rhine-Westphalia.

A two-way coalition of CDU and SPD — the combination that governs on the federal level — would have a wafer-thin majority in Saxony-Anhalt, too.

Some kind of cooperation between the CDU and the Greens in the next federal government appears inevitable. But opinion polls are indicating that this combination alone may not be able to secure a majority in the national parliament, the Bundestag, the next government in Berlin may well also be a three-way coalition.

In the post-Merkel era, Saxony-Anhalt's new coalition might turn out to be a blueprint for Germany's national government.