The Green Party′s Annalena Baerbock represents a new generation | Germany | News and in-depth reporting from Berlin and beyond | DW | 11.08.2021

Annalena Baerbock is said to be tough, talented, and very ambitious. But since she was named as Germany's Green Party's candidate for chancellor, she has been faced with a barrage of personal attacks. 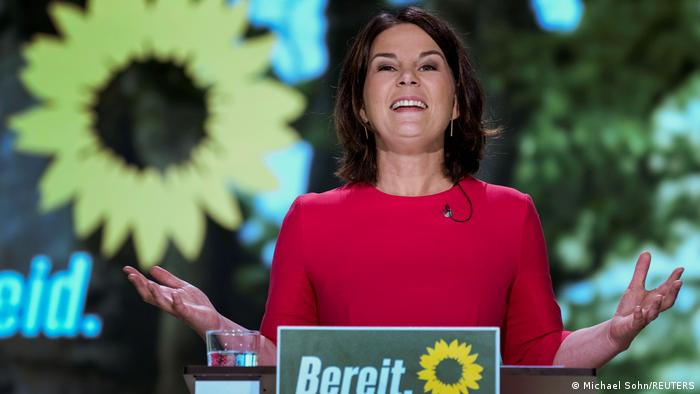 Annalena Baerbock has been sharpening her political profile

When Annalena Baerbock was named the Green Party's first-ever chancellor candidate in April she was credited for her party's remarkable rise in opinion polls later that month.

But then she suffered a barrage of personal attacks, putting her on the defensive, as criticism targeted her personal credibility: Baerbock, who has never held a government office, was accused of minor inaccuracies in her official resume, of a delay in paying taxes on a sizable Christmas bonus, on plagiarizing parts of her new book, and then she used a racial slur in a quote in an interview.

Each time Baerbock was quick to apologize. But her approval ratings declined, and the party's campaign did not managed to regain the positive momentum of earlier in the year.

Climate change as the core issue

Baerbock stepped into the limelight when she was elected party co-chair in 2018. The still-little-known regional politician, a resident of the eastern state of Brandenburg, has since projected herself as an expert on how to tackle climate change.

In live TV debates with her two competitors for the chancellorship — Armin Laschet, of the center-right Christian Democrats (CDU), and Olaf Scholz, of the center-left Social Democrats (SPD) — Baerbock scored points with younger voters.

She attacked the current CDU-SPD coalition government over its dismal record on climate protection. "We are missing our climate targets, with dramatic consequences, and you have both made clear that you didn't orientate yourselves around the solutions, but just pushed the blame on each other about who was hindering what," she said.

Baerbock has been arguing in favor of phasing out coal-powered energy far earlier than the current target date of 2038. She also backs a speed limit of 130 kilometers per hour (78 miles per hour) on the autobahn, as German highways are known, and limiting short-haul flights. She also supports a raise in the minimum wage to €12 ($14) per hour, and she opposes a hike in German defense spending.

Baerbock: 'A huge opportunity for our country'

Baerbock has also spoken out on thorny foreign policy issues, advocating a tough stance on Russia and China over human rights issues. She has also spoken on the threats posed by far-right populism and xenophobia.

The Greens have traditionally failed to gain ground in rural areas and especially in eastern Germany. Baerbock and her family of four have long been based in the eastern city of Potsdam.

Early on, Baerbock was driven by ambition. Born in 1980 in the small town of Pattensen in Lower Saxony, she was a natural athlete, placing third at Germany's national trampolining championship. She was only 16 when she went to spend a year in the United States. Later, she studied law in Hannover before going on to the London School of Economics, where she studied international law. As a result, Baerbock gives interviews in fluent English — something that, even in this day and age, can't be taken for granted among German politicians.

In an interview with DW in early 2021, Baerbock welcomed President Joe Biden's decision to bring the US back into the Paris climate agreement.

"We Europeans, including the German government, need to take advantage of the current situation to realize the proposals that the US administration has put forward concerning climate-neutral cooperation," she said. "We need to get moving and point the way towards a European and trans-Atlantic Green Deal."

Both Baerbock and her co-party chair, Robert Habeck, have few inhibitions about talking to members of other parties, to seek possible common ground.

Initially, there was speculation about a possible conservative-Green coalition in Berlin after the 2021 election, but, with the SPD rising in the polls, Baerbock began to stress that a center-left coalition would be her preference.

Germany needs a new beginning, Baerbock stressed during her campaign, pointing out that her two competitors were both in their early 60s. "That can only happen with Greens in a leading role," she said, stressing that all democratic parties would have to talk to each other. In doing so, she included the Left Party. She warned strongly against equating the Left with the far-right Alternative for Germany.

This is a reworked and updated version of an article that was first published on April 3, 2021.