Who will succeed Angela Merkel? The candidates to become Germany’s next chancellor faced off in a TV debate. Social Democrat Olaf Scholz produced a solid performance to maintain his hold as the front-runner. 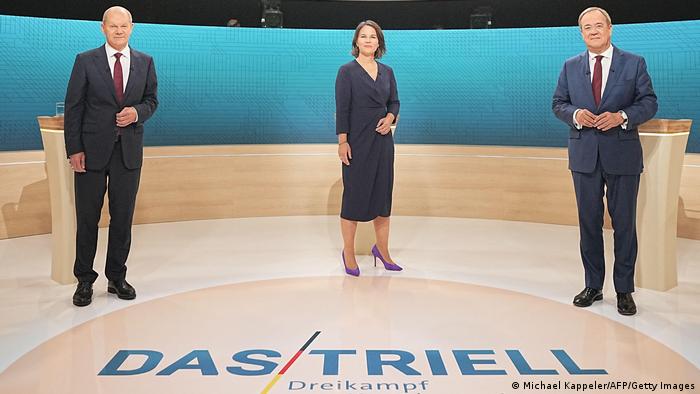 Early snap polls suggested that the Social Democrat (SPD) chancellor candidate Olaf Scholz did enough in Sunday evening's three-way TV debate to maintain a slim but solid lead over his rivals in the final straight of the election campaign.

Just moments after the 90-minute "truel" ended on Germany's public broadcasters, an Infratest dimap poll found that 41% of the 1,500 viewers asked found Scholz the most convincing, a long way ahead of the Christian Democratic Union's (CDU) candidate Armin Laschet and the Green party's Annalena Baerbock, on 27% and 25% respectively.

That suggested Scholz had successfully fended off the barrage from his conservative rival Laschet, who, as expected, spent the early part of the debate trying to bait Finance Minister Scholz out of his unperturbed demeanor. But those attacks ebbed later in the debate when the candidates were forced to present policy details.

Struggling with the radicals

Laschet was quick to score the points he was eager to make against Scholz, first demanding to know once again whether he would countenance a coalition with the socialist Left Party. Scholz refused to be drawn, as he did when challenged by moderator Maybrit Illner on why he had not yet presented a potential government team or a shadow cabinet for after the election.

But Laschet himself was soon under pressure over his own party colleagues, specifically CDU candidate in eastern Germany Hans-Georg Maassen.Maassen, a former domestic intelligence chief, has frequently drawn criticism over nationalist remarks that many believe belong more to a far-right party than a center-right one.

Laschet refused to say whether or not he would vote for Maassen if he lived in his constituency. "There are a lot of differences between me and Mr. Maassen, and he will have to stick to the course that I set as party leader," he said.

Laschet: 'I want to be a chancellor who's trusted'

Scholz, meanwhile, was forced on the defensive when asked about recent raids by state prosecutors on the Finance Ministry, part of a probe into the government's FIU anti-money laundering department, an agency of Finance Ministry.

"If my finance minister had worked like you, we would have had a serious problem," Laschet, currently state premier of North Rhine-Westphalia, told Scholz.

Scholz, prepared for the attack, angrily accused Laschet of painting a misleading picture and played down the investigation, because it was centered on the possibly illegal activities of a single employee in Cologne. He went on to point out that he had expanded financial oversight at the ministry since his tenure began in 2018.

For her part, Baerbock used the opportunity to attack both the parties currently in government for failing to do enough about the billions that the state loses every year through tax evasion and money laundering. "Now we're clearly seeing that there's a huge problem," she said.

Baerbock: 'A huge opportunity for our country'

Baerbock was at her strongest when challenging the men on either side of her about their parties' record on the climate crisis. "We are missing our climate targets, with dramatic consequences, and you have both made clear that you didn't orientate yourselves around the solutions, but just pushed the blame on each other about who was hindering what," she said.

Picking up a frequently-used line in her campaign, Baerbock argued that the next government would be one of the last to have an active effect on the climate crisis. "That means we have to get away from coal power earlier, and significantly earlier than 2038 (the current target)," she said. "But we can't carry on for the next 17 years as if nothing was happening."

Both Scholz and Laschet claimed that their parties were taking the crisis seriously, though both made a point of underlining the importance of protecting Germany's leading industries — specifically the auto and the chemical industry.

"The German auto industry is long since on the path to adjusting," Laschet said, before accusing both Scholz and Baerbock of wanting to hamstring industries. "It won't work with laws, with bans, with regulations, but with a dynamic where everyone is keen to create something new."

Scholz also said that Germany was facing "the biggest industrial conversion for well over 100 years." "We have 250 years of economic and industrial history behind us, based on coal, gas, and oil," he said. "And if we are to change that now, that means we have to do an awful lot, for it to really work."

The SPD went into Sunday's debate with a six-point lead over the CDU in the latest poll (26% vs. 20%, the INSA poll said), with the Green party another five points behind on 15%. If the snap polls following Sunday's debate are anything to go by, the CDU is running out of time to close the gap.

DW has been updating this article to reflect the analysis of the debate.

Two weeks ahead of Germany's Bundestag election, the three chancellor candidates again sparred in a televised debate. Not all of their statements were accurate.

Conservative chancellor candidate Armin Laschet has made one his last rolls of the dice: A program for his first 100 days in office if he should win. Laschet trails the center-left candidate Olaf Scholz in the polls.

Scholz: 'We need to live up to our obligations in NATO'

Baerbock: 'Obligatory vaccination should be considered'

Laschet: 'We are in favor of managed migration'