Conservative chancellor candidate Armin Laschet has made one of his last rolls of the dice: A program for his first 100 days in office if he should win. Laschet trails the center-left candidate Olaf Scholz in the polls. 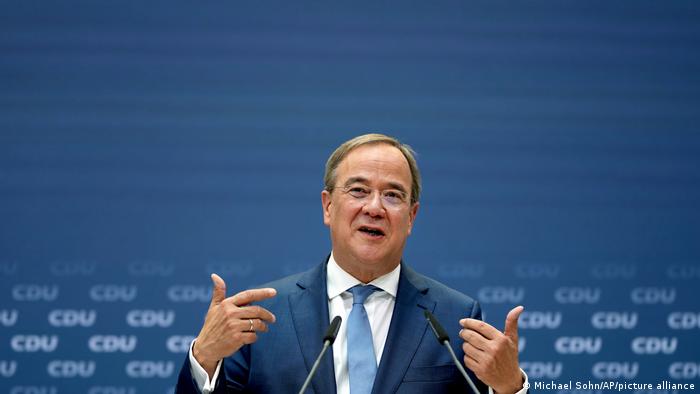 Laschet presented the plan on Monday at CDU headquarters in Berlin

Christian Democrat (CDU) candidate Armin Laschet attempted to brush aside the weekend's disappointing TV debate by presenting a four-page "immediate program" for his first 100 days in office on Monday.

The six-package plan, containing 19 promises, had two basic purposes: Firstly, to stop the CDU's slide to historic lows in the opinion polls with less than two weeks to go before the election, and secondly, to distinguish the CDU's plans from that of a potential center-left government under Social Democrat (SPD) Olaf Scholz.

Laschet was understandably keen to downplay the polls, which currently give Scholz a six-point lead. "The voters are voting on September 26, and then we start from zero," he reminded reporters at a press conference at CDU headquarters in Berlin. "It doesn't matter who is in the lead now, the issue is, and this was repeated yesterday in the debate very precisely, that we would get a very different republic with the SPD, the Left, and the Greens."

A new plan, after 16 years in power

Laschet was keen to point out that the 100-day plan comprised a few issues not addressed in Sunday's TV debate, particularly domestic security, which his party sees as their natural policy turf.

The plan also offered a number of tax-relief promises for low and middle-income earners, something the CDU had offered little of in its 16 years in power under Chancellor Angela Merkel.

Security: Installing 1,000 new video cameras in railway stations every year; a minimum prison sentence of six months for an attack on a police officer or other first responder; the creation of a national security council based in the chancellery to coordinate foreign and domestic security.

Infrastructure: A "fast-track" approval system for power lines and railways.

Help for middle classes: No tax rises for small and medium-sized businesses.

Many of the points in the plan had already been presented in the CDU's election manifesto, though by making them into pledges for his first three months in office, Laschet hoped to infuse with them with a little urgency.

Politicians from other parties immediately laid into the plans as being too weak and unoriginal. Renate Künast, agriculture minister from 2001 to 2005, the last time the Greens were in power in Germany, tweeted that the CDU's climate protection plans failed to give farmers the security they needed in the face of the climate crisis.

"This 'immediate program' has proved that Laschet and the CDU have not understood how farmers are doing," she wrote. "Farmers are being promised planning security. But everything will just stay as it is in nature, environment, and animal protection."

Some observers also expressed doubt about the financial feasibility of the plan, and what it meant for the CDU's promise to re-apply Germany's "debt break," which was loosened during the COVID pandemic. Jens Südekum, an economist at Heinrich Heine University in Düsseldorf, told the Reuters news agency that the financing for Laschet's plans were "completely unclear." "This will create budget holes in the double-digit billions," he said.