Merkel′s conservatives present manifesto — ′Together for a Modern Germany′ | Germany | News and in-depth reporting from Berlin and beyond | DW | 21.06.2021

Merkel's conservatives present manifesto — 'Together for a Modern Germany'

Germany's CDU/CSU reject tax hikes and remain vague on climate change in their election platform. On foreign policy, they take a tough stance on Turkey and aim for trans-Atlantic unity on China. 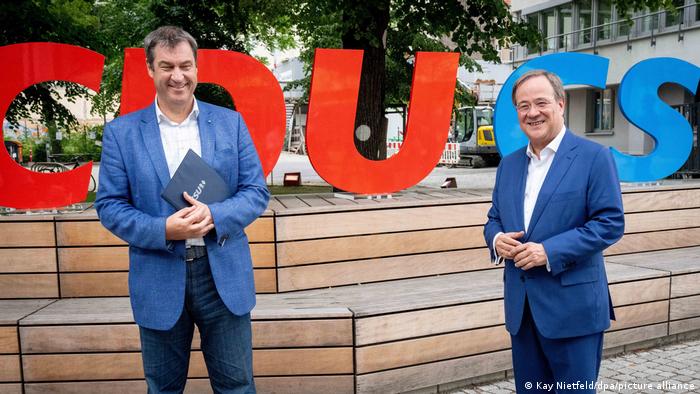 Less than 100 days before Germany's voters head to the polls, the conservative Christian Democratic Union (CDU) and its Bavarian sister party, the Christian Social Union (CSU), have finalized their election manifesto: "The Program for Stability and Renewal —  Together for a Modern Germany."

CDU leader and chancellor candidate Armin Laschet and CSU chair Markus Söder presented the 139-page paper in a show of unity on Monday — just three months after a bitter fight for the position of conservative chancellor candidacy, which was ultimately handed to Laschet.

"We consistently combine climate protection with economic strength and social security," Laschet said. "We provide security and cohesion in times of change."

In an apparent swipe at the Greens, who have slipped several percentage points in the polls in recent weeks, Söder insisted the CDU/CSU could "do climate policy without the Greens."

"We can do that ourselves," he said.

The CDU and CSU, which are currently leading in the polls at about 28%, are the last major parties to present their manifesto for September's general election. Political observers were quick to point out that it caters to the CDU/CSU's elderly electorate, of which 40% are over the age of 60.

The conservatives' political opponents also quickly voiced criticism — particularly on the lack of climate protection policy and the financing of their election promises.

So what do the CDU and CSU — known collectively as the Union — have in store?

Foreign policy: The Union wants Germany, within the framework of the EU, NATO, the United Nations, and other organizations, to "actively contribute to international crisis management and to shaping world order." While China's desire for power must be countered with strength and unity, in close coordination with the transatlantic partners, close cooperation with China must still be sought, the Union says. With regard to Russia, the CDU/CSU say they will continue to strive towards an end to the conflict in eastern Ukraine and a return to the legitimate status of Crimea under international law. The Union's manifesto also rejects Turkey's possible accession into the European Union.

Migration: Migration should be limited and controlled effectively, the manifesto lays out. Beyond the existing regulations, no further family reunification should be granted to refugees. Rejected asylum seekers should be forced to leave the country, and collective deportations should be facilitated by "detention facilities" at airports.

Climate: The climate chapter in particular falls short on specific figures. The CDU and CSU say they're committed to Germany's goal of climate neutrality by 2045 — but that's already part of the outgoing coalition's Climate Protection Law. The manifesto remains vague on what that means for everyday life.  Instead, the two parties want to rely on expanded CO2 emissions trading, which they say is the ideal way forward with Germany's European neighbors. In addition to e-mobility, the Union says it also wants to rely on hybrid gases for road vehicles. A ban on diesel vehicles, however, is off the cards — as is a general speed limit on highways. It does mention, however, that more freight should be transported by rail and on inland waterways rather than roads.

Domestic security: The CDU and CSU want to take a hard stance when it comes to domestic security. The manifesto advocates more video surveillance in public spaces, automated face recognition, and the widespread use of body cameras. The state must take tough action against criminals, terrorists, and clans, the manifesto reads.

Social welfare and housing: Recent calls for an increase in the retirement age are not included in the program. However, the Union wants to examine the concept of a "generation fund" in which the state would put aside €100 a month for every newborn child until they turn 18. An alternative to the "Riester" private pension fund is also in the program. This would be supported by state subsidies and would be compulsory for low-wage earners. By 2025, the Union wants to build more than 1.5 million new apartments. It also foresees a federal construction program for employee housing and incentives for the construction of company housing.

Economy and taxes: Despite Germany's immense national debt, the Union wants to forego tax increases due to the corona pandemic. The manifesto doesn't mention any major tax relief for citizens. Meanwhile, the Union is setting its sights on capping corporation tax at 25%. The maximum wage for an income tax-free "mini-job" is to be increased from €450 ($535) to €550.

The CDU/CSU also insist that the EU's COVID-19 recovery fund remains "one-time and temporary," and that this should be "no entry into a debt union."

Space travel: The Union's program says space travel is a key industry from which medium-sized companies should also benefit. The conservatives plan to pass a space law that is start-up and SME-friendly. "We will work on an international level for the sustainable use of space in order to enable future generations to have access to space," the manifesto reads.

The Greens and the Left Party were quick to criticize the CDU and CSU for not explaining how their election promises were to be funded.

Green party co-leader and chancellor candidate Annalena Baerbock criticized the manifesto for a lack of vision.

"We have to invest courageously now. That costs money," she said, adding that climate protection must be the basis for economic activity.

Speaking to broadcaster RTL/ntv on Monday, Lars Klingbeil, General Secretary of the Social Democrats (SPD) — the conservatives' current coalition partner — deplored the direction of the manifesto.

"This is no longer Angela Merkel's Union, this shows that social coldness will move in with [CDU leader and chancellor candidate] Armin Laschet. And this is a program that will polarize this country," Klingbeil said.

The manifesto was received with mix responses from leading economists. Marcel Fratzscher, President of the German Institute for Economic Research said he struggled to see how the CDU/CSU program can be financed.

"It provides relief for top earners and companies by €50 billion a year, but categorically rules out tax increases. And it wants [Germany] to get back to the black zero as quickly as possible," Fratzscher tweeted.

"In relation to climate protection and innovation, the CDU/CSU election manifesto hopes that the free market and companies can resolve the problems," he said. "But the last 30 years of neo-liberalism have shown around the world that this model has failed."

Fratzscher deemed the Union's plans to examine a "generation fund" for pensions, however, as an "economically wise approach" towards acheiving more secure pensions.