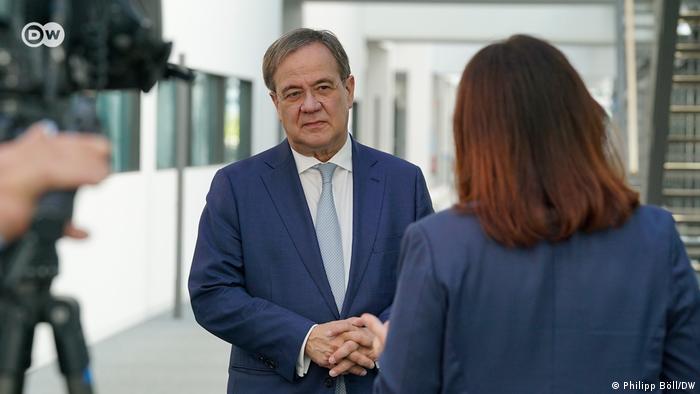 Armin Laschet, the conservative Christian Democratic Union (CDU) party's candidate to be chancellor, told DW on Monday that Germany and the EU should keep channels of dialogue with Moscow open.

Laschet stressed that, despite differences with Russia on key issues such as the annexation of Crimea, Germany should not seek to isolate the country from a diplomatic point of view.

The politician, who is state premier of Germany's most populous state North Rhine-Westphalia, welcomed the fact that US President Joe Biden would be meeting his Russian counterpart, Vladimir Putin, in the coming week.

"When things get difficult, you have to talk more, not less," Laschet said. "That's why it's a good thing that Joe Biden, the American president, will be meeting President Putin in the next few days. The American and Russian presidents meeting again at last. That's more important than ever in times of crisis."

"The US is returning to the World Health Organization, it's engaging at the United Nations again, and it's reviving the G7 process, as we just saw over the weekend," Laschet said. "And I believe we should seize this moment."

"The president's idea of a coalition of democracies around the world that work closely together is a particular opportunity for Europe and for Germany to be strongly involved," Laschet said.

To this end, Laschet said, Germany's Russia policy would need to be part of an EU-wide approach.

Among the issues at the forefront of Russian relations with Germany is the Nord Stream 2 pipeline under the Baltic Sea to Germany. That project could potentially allow Moscow to bypass Ukraine, Poland and other countries, which collect transit fees on Russian energy deliveries.

Laschet said a precondition of the project's going ahead was that Russia should not be allowed to use it to exert pressure on its neighbors.

"This pipeline must not be used to blackmail Ukraine, or the Baltic States or Poland," Laschet said. "But, once it's been built, it will be an additional good part of the energy supply."

"When the gas starts flowing, we need to keep a close eye on these geopolitical rules and on the protection of Ukraine," Laschet said. "And that's been agreed on a European level, too."

On Belarus and sanctions

Laschet said tougher sanctions could be an option when it came to Belarus over a clampdown on dissent since elections in 2020. This most recently saw the forced landing of a Ryanair flight by Minsk, and the subsequent arrest of a dissident journalist.

The politician said officials who were involved in human rights violations, directly or indirectly, should be targeted. Some such individuals, he noted, had their own business interests — including President Alexander Lukashenko himself.

"Their activities, their companies, need to come into the European Union's sanctions regime," Laschet said. "That hasn't happened yet. That is what I would like to see: expanding the sanctions to increase targeted pressure on President Lukashenko."

Armin Laschet is the CDU's candidate to succeed Angela Merkel as chancellor after September's elections in Germany.

The interview was conducted by Manuela Kasper-Claridge