At his first NATO summit, Biden has reaffirmed US commitments to strong trans-Atlantic relations, after four years of "America First" policies under former President Donald Trump. 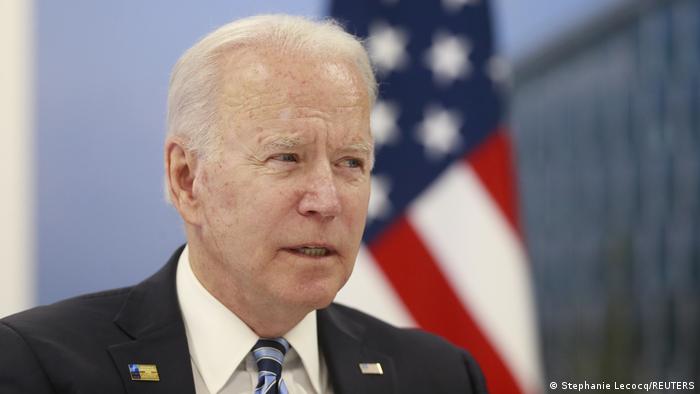 Joe Biden has told NATO chief Jens Stoltenberg: 'I just want all of Europe to know that the United States is there'

US President Joe Biden on Monday pledged Washington's support for its NATO allies in the face of "new challenges."

Biden is taking part in his first NATO summit, with the 30-nation alliance expected to focus on security challenges posed by Russia and China.

"I think that there is a growing recognition over the last couple of years that we have new challenges. And we have Russia that is not acting in a way that is consistent with what we had hoped, as well as China," Biden said.

Biden said the US takes its responsibility to defend its NATO allies as a "sacred obligation."

NATO chief Jens Stoltenberg said the meeting came "at a pivotal moment for our alliance, and today we'll open a new chapter in our trans-Atlantic relationship."

He said leaders aimed to set aside the divisions of the Donald Trump era and focus on external threats instead.

What is expected during the NATO summit?

Stoltenberg told reporters that a final NATO summit statement will cement a new strategy toward China.

"We're not entering a new Cold War and China is not our adversary, not our enemy," Stoltenberg said.

"But we need to address together, as the alliance, the challenges that the rise of China poses to our security."

Stoltenberg said he expects leaders to agree on "an agenda for NATO with higher ambitions" to strengthen the alliance's collective defense and spend more on NATO's military budget.

Russia, climate change and the US-led military withdrawal from Afghanistan are also high on the agenda, among other topics.

Arriving at the summit, German Chancellor Angela Merkel said NATO leaders would also discuss working with Georgia and Ukraine, two countries seeking closer ties with NATO as a shield against the threat from neighboring Russia.

She also highlighted the need to respond to disinformation campaigns launched by Moscow.

"The issues on the agenda today concern us all. First of all, the challenge we are facing: Russia, but also the Indo-Pacific region with China in increasing measure," Merkel said.

"Hybrid challenges are becoming increasingly important: Cyberattacks and, especially with regard to Russia, disinformation campaigns."

"China spends with abandon on its military, it has the second-largest armed forces in the world after the United States and it already has the largest navy. It is not bound by any arms control treaties," Schultz said.

"So, this is very much a country that NATO wants to keep on the level. It does not want increased tensions, especially when the relationship with Russia is going so badly and requires so much attention from NATO allies."

On Tuesday, the US president will meet with EU leaders, where he will seek to mend trade relations between Washington and the 27-member bloc.

Former President Trump slapped tariffs on French products and other European goods during his presidency, and criticized what he believed to be the nonreciprocal nature of the US-EU trade relationship.

He also often chided NATO members for not contributing their "fair share" in defense spending.

Biden's arrival in Belgium came after he met with G7 members in the UK. The president attended a three-day summit with leaders of wealthy, democratic countries in Cornwall.

Biden will head to Geneva on Wednesday, where he will take part in a much-anticipated summit with Russian President Vladimir Putin.

The two leaders have had a tense relationship, with Biden earlier this year calling Putin a "killer" during a television interview.

A new report has accused China of pressuring hundreds of thousands of Uighur Muslims to pick cotton in the province of Xinjiang. Activists have claimed major Western fashion brands are complicit in the abuse.

Media tycoon Jimmy Lai is among those sentenced for their role in a pro-democracy march in 2019. The defendants were found guilty this month of organizing and participating in unauthorized assemblies.