With just over three weeks to the election, the CDU's candidate to replace Chancellor Angela Merkel has presented his policy team. Will it help him turn around a recent drop in support? The conservative Christian Democratic Union (CDU) and its Bavarian sister party CSU have been seeing an unprecedented fall in opinion polls ahead of the general election on September 26.

The decline has been blamed largely on Armin Laschet, the top candidate to succeed Angela Merkel, who is standing down after 16 years in office.

The CDU's chairman, Laschet has come across as vague and indecisive, with a lackluster campaign marred by slip-ups.

Who is on the 'future team?' 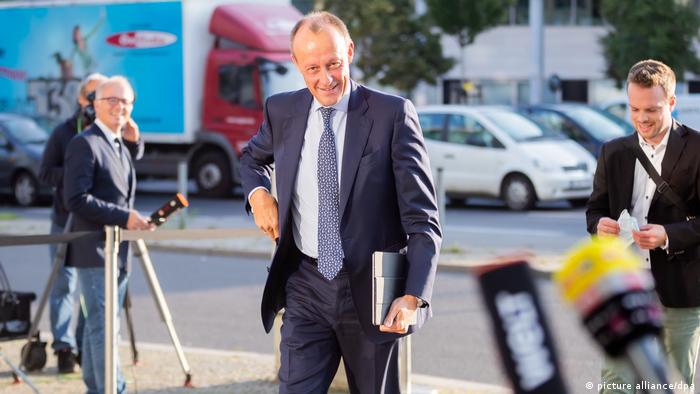 Former CDU/CSU parliamentary group leader Friedrich Merz is the most prominent member. The former Blackwater CEO and old Merkel adversary threw his weight behind Laschet, who had beat Merz in the race for CDU chairman in January.

High-profile terrorism and security expert Peter Neumann is new to politics. In 2017, he also served as the Organization for Security and Cooperation in Europe's (OSCE) special representative on countering violent extremism. Neumann called Laschet a "politician who really listens, who is really interested in issues," he said. "And I really hope he will be the next German chancellor."

Music manager Joe Chialo was born in 1970 in Bonn as the son of a Tanzanian diplomat. In the 1990s, he was a member of the Green party. "I am not the token black guy," said Chialo in an interview with the Frankfurter Allgemeine newspaper. During Friday's presentation, Chialo stressed his intention to promote arts and culture, a sector that has greatly suffered under the COVID restrictions.

Barbara Klepsch, a local politician from Dresden, was named as the point person for the development of eastern Germany — the former communist GDR —  a region that is lagging behind economically and is lacking equal representation in German politics as well as big business.

It was emphasized in the CDU/CSU that the team was not the Cabinet. Laschet has said repeatedly that he intended to focus on topics rather than personalities: He identified conservative family values, education, digitization and the economy as among the most important.

The presentation of the team comes at a time when the election campaign has entered what is referred to as the "hot phase." At the end of his presentation, Laschet showed his fighting spirit: "I am keen to see the team the Social Democrats come up with," he said in reference to the center-left party that has taken the lead in polls.

Laschet also made a reference to a possible left-wing coalition of SPD, Greens and the socialist Left party —a staple of all conservative election campaigns, that is regularly countered with accusations of fear-mongering.

But postal voting has already begun. And with an expected 50% of voters expected to opt for mail-in voting amid the COVID pandemic, it's unclear how much Laschet will be able to turn things around.

Anton Hofreiter, leader of the Green party parliamentary group, was not impressed with the lineup, speaking of "helpless actionism." Friedrich Merz, Hofreiter told the Rheinische Post newspaper, "stands for regression and an economic policy of the past century."

#Zukunftsteam (German for future team) quickly started trending on German media, with commentators heaping scorn on the lineup they saw as out of touch with reality.

"How can a party that’s been in power for 16 years credibly speak of the need 'for more climate protection,' 'innovation,' etc.? Voters don’t have amnesia," wrote Politico Europe correspondent Matt Karnitschnig on Twitter.