Germany: Opinion poll suggests Green party could head next government | Germany | News and in-depth reporting from Berlin and beyond | DW | 07.05.2021

The latest Deutschlandtrend survey suggests that voter support has shifted considerably following the nomination of the Green party chancellor candidate. And voters have doubts about Germany's coronavirus policy. 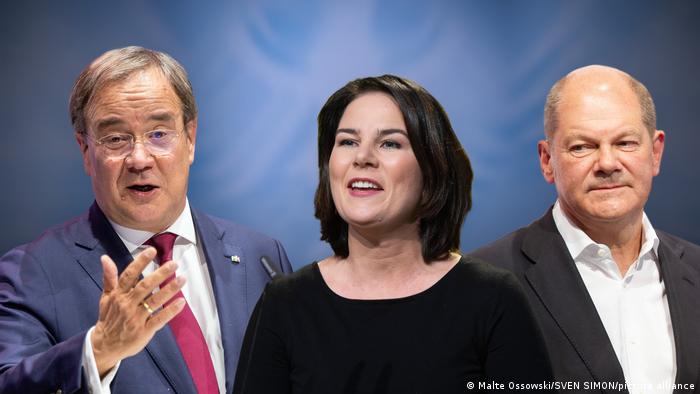 Armin Laschet, Annalena Baerbock and Olaf Scholz are the candidates for chancellor

Germany's governing "Grand Coalition" between the Christian Democratic Union (CDU), the Christian Social Union (CSU), and the Social Democrats (SPD) currently does not have the support from a majority of voters according to the latest Deutschlandtrend poll.

Like other surveys over the past two weeks, Deutschlandtrend now sees the Green party in the first position at 26%, as the CDU/CSU continues to lose support and has fallen to a mere 23% and the SPD have come in at only 14%.

The new situation in the polls can be linked to individual politicians: If German voters could decide directly who should succeed Angela Merkel as chancellor in September, 28% would vote for the Greens' chancellor candidate Annalena Baerbock.

Of the three chancellor candidates, Baerbock is seen as the most likable and credible. SPD's Scholz, however, is deemed to be the strongest leader of the three.

In the evaluation of her political work, Baerbock has jumped a massive 41 percentage points in the last month to catch up with Scholz.

Conservative frontman Laschet, on the other hand, cannot seem to gain popularity since being appointed as the CDU/CSU candidate. At 24%, the CDU party leader still has a similar rating to a month ago — which is far less than the 32.9% support they got in the last general election in 2017.

Still, Angela Merkel, who will not be running for a fifth term in office in September's election, remains by far the most popular politician in Germany.

Fighting the pandemic is the main topic on voters' minds for now. Germany still finds itself fighting the third wave — even if there have been positive signs of it weakening in recent days.

In 2020, the initial government response to the outbreak saw a jump in voter confidence, but that quickly changed a year on due to growing doubts about crisis management and an initially sluggish vaccine rollout.

The latest Deutschlandtrend survey shows that a good six out of 10 respondents are dissatisfied, while only around a third say they're happy with the government's response. Supporters of the business-friendly Free Democrats (74%) and the far-right Alternative for Germany (AfD, 91%) are particularly critical.

When asked about whether the measures to curb the pandemic are justified, 40% say the rules are appropriate, while 26% think they don't go far enough. For 30% of people surveyed, the measures already go too far.

In the coming week, Germany plans to ease coronavirus restrictions for people who have been fully vaccinated against COVID-19 or have recovered from the disease in the last six months. This would mean that the night-time curfew and contact restrictions would no longer be applicable to them. Mandatory testing before going to a non-essential shop or to the hairdresser would also be dropped.

According to the Deutschlandtrend poll, however, opinion among people in Germany is divided. Every second person thinks that the restrictions should only be eased once more people have had the chance to be vaccinated. At the moment, around 30% of Germany's population has had their first shot, and approximately 9% have had their second.

In general, 55% of those surveyed think that the targeted easing of restrictions for vaccinated and recovered people is a step in the right direction.

As far as the important question of vaccination is concerned, willingness has grown considerably. In February, 60% of people in Germany said they were ready to be vaccinated. That's now at 75%. The poll also suggests that willingness to be vaccinated increases with age.

The Deutschlandtrend survey was carried out by Infratest-Dimap from May 3-5, 2021, among 1,351 people in Germany.

Staunch conservative Friedrich Merz has lost many power struggles within the Christian Democratic Union. Now he's throwing his weight behind struggling chancellor candidate Armin Laschet — to get what in return?