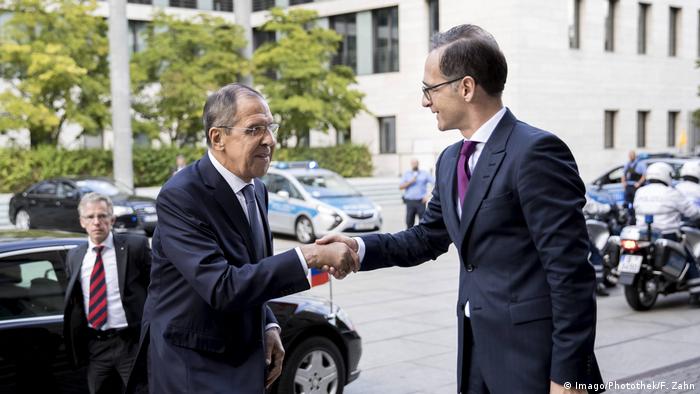 German Foreign minister Heiko Maas met with Russian counterpart Sergei Lavrov in Berlin on Friday to discuss measures to avert the humanitarian crisis that would likely result if a looming bombing campaign in the Syrian city of Idlib goes ahead.

The issue of Idlib's fate has prompted intense diplomatic activity of late as Russian-backed Syrian government forces have continued to amass troops near the city of three million.

What is being discussed?

What has been said so far

Appearing alongside Lavrov, Foreign Minister Maas said: "We do not want to see thousands of deaths among civilians."

Lavrov promised: "We will establish humanitarian corridors, set up ceasefire zones and we are doing everything to ensure that the civilian population would not suffer."

The Russian foreign minister also raised the possibility of rebels using chemical weapons against government troops in Idlib as grounds for an offensive but added: "What is being presented at the moment as the beginning of a Russian-backed offensive by Syrian forces is not a faithful representation of the facts. The task above all is to eliminate terrorist organizations."

Looming disaster: Idlib is the last opposition stronghold in Syria, with some 10,000 anti-government fighters gathered there. The United Nations has warned that as many as 900,000 people could be displaced if Assad's planned offensive goes ahead, saying it could create the "worst humanitarian catastrophe" of the century.

Lavrov pressed for more German involvement when it comes to rebuilding Syria. Those views echoed statements made by Russian President Vladimir Putin in Berlin in August, who said: "We need to strengthen the humanitarian effort in the Syrian conflict. By that I mean, above all, humanitarian aid to the Syrian people, and help the regions where refugees living abroad can return to."

Though Germany has said it will not simply comply with Russian requests for reconstruction help in Syria, the issue could provide leverage in stopping the Idlib offensive. Maas emphasized that fact by stating: "If there's a political solution that leads to free elections ultimately, then we are ready to take responsibility for the reconstruction. Neither the Russians, nor the Iranians nor the Turks will be able to do that on their own."

Germany has also said that it will not make the departure of Syrian President Bashar Assad a precondition for potential cooperation.

The shadow of Salisbury

Lavrov also took the opportunity to address the case of poisoned Russian double-agent Sergei Skripal in the UK. He accused Britain of peddling false information to European allies to counter its isolated position as a result of Brexit. "There are no facts which we can address meaningfully. It is pointless to have this discussion and we confirmed to our German colleagues that we see no proof."

Maas said that Germany "had been given information by Britain, and have no reason to question that information." He also urged Russia to share information about the two men London says were behind the attack. London brushed off a recent interview on Russia's RT television, in which the men claimed to have been tourists, as nothing but "obfuscation and lies."