German Foreign Minister Maas and his Turkish counterpart have held talks on preventing a humanitarian catastrophe in the Syrian city of Idlib. The diplomats also pledged to mend strained ties between their countries. 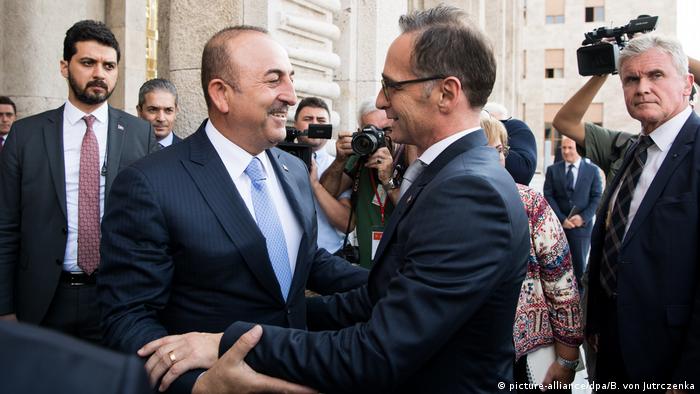 Maas, who is on his first official visit to Turkey, made the comments at a joint press conference with Turkish Foreign Minister Mevlut Cavusoglu in Ankara.

"Germany is ready to consider increasing its humanitarian commitment [to Syria] should multi-front battles take place," Maas said, following talks with his counterpart.

"We will continue our efforts to prevent it," Maas added. "Turkey is possibly better prepared than others to weigh in on these developments."

Ankara has warned of a humanitarian catastrophe if Syrian President Bashar al-Assad launches a large-scale offensive to capture Idlib, the last major rebel-held stronghold in the Syria conflict. Turkey fears such an assault would send many more refugees fleeing north, across its border.

Cavusoglu told reporters a common strategy was needed to stamp out radical groups in Idlib, but warned that the continued bombing of the city had to stop. He added that he had made as much clear to Russia, which launched new strikes on Idlib this week.

The two foreign ministers also pledged to work towards improving relations between their countries.

Ahead of his two-day visit, Maas made clear that concerns about Turkey's human rights record and the release of German detainees from Turkish prisons would be high on the agenda. He had also expressed hope that ties could be on the mend.

"Turkey is more than just a big neighbor; it is also an important partner for Germany," said Maas, also issuing the comment in Turkish. "It is in Germany's strategic interest that we shape our relations with Turkey constructively."

According to Germany's foreign office, seven German citizens currently in custody in Turkey are being held for "political" reasons. Their situation was said to be a priority for Maas' visit.

Maas had previously stressed that relations with Turkey cannot return to normal until all detainees are freed. But in Wednesday's conference, Cavusoglu said there shouldn't be any preconditions for normalization.

The journalist and translator, who was on remand in Turkey on terror-related charges, has flown home with her three-year-old son. Although a Turkish court lifted her travel ban, she still faces trial in October. (26.08.2018)