Foreign Minister Annalena Baerbock has written an opinion piece with her Irish counterpart in a British paper, saying the UK was "not engaging in good faith" with its plans to change the Northern Ireland protocol. 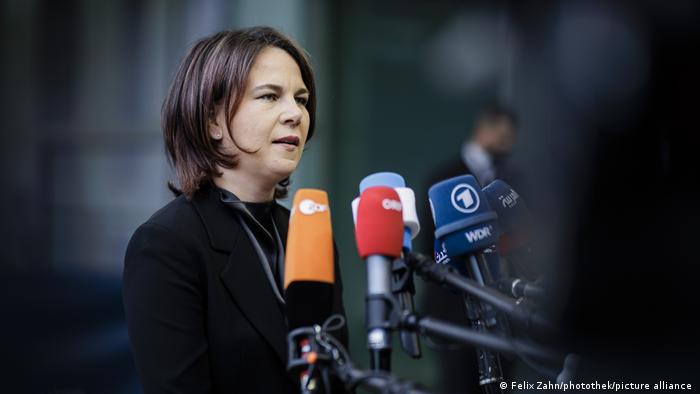 German Foreign Minister Annalena Baerbock condemned London's plan to tear up the Northern Ireland Protocol, agreed as part of the post-Brexit trade deal, in an opinion piece published in the British newspaper The Observer on Sunday.

"There is no legal or political justification for unilaterally breaking an international agreement entered into only two years ago," Baerbock said in the piece co-written with her Irish counterpart Simon Coveney.

The UK government has signaled that it wants to repeal parts of the agreement that require the checking of goods going between Northern Ireland and the British mainland in order to keep a soft border with the Republic of Ireland, an EU member state.

Baerbock and Coveney argued that the current protocol has been good for Northern Ireland which has seen faster post-pandemic recovery than other parts of the UK.

"Unfortunately, the British government chose not to engage in good faith with these proposals. Instead of the path of partnership and dialogue, it has chosen unilateralism," the two top ministers wrote.

Why does the UK what to change the Northern Ireland protocol?

The government in London has said it wants to implement a two-lane system for goods going from the UK mainland to Northern Ireland and for those that will be taken across the border into the Republic of Ireland.

Northern Ireland's border with the EU was one of the trickiest sticking points for Brexit negotiations due to the EU's insistence on avoiding a hard border on the island of Ireland.

But some members of Prime Minister Boris Johnson's ruling Conservative Party oppose the customs border in the Irish Sea, as does the main unionist party in Northern Ireland, the DUP.

The DUP has refused to form a government with Sinn Fein — the pro-republican party that won the most votes in this year's assembly election — as set out in the Good Friday agreement, until the Northern Ireland protocol is scrapped.

The EU launched legal action against the UK in June saying that unilaterally changing the agreement is a breach of international law.

This article was edited by Jenipher Camino Gonzalez.