Opinion: Northern Ireland Protocol — Boris Johnson gets out the chainsaw

The British prime minister is ripping the Northern Ireland Protocol out of Brexit. This breach is an act of political insanity and is further proof of Boris Johnson's utter irresponsibility, says DW's Barbara Wesel. 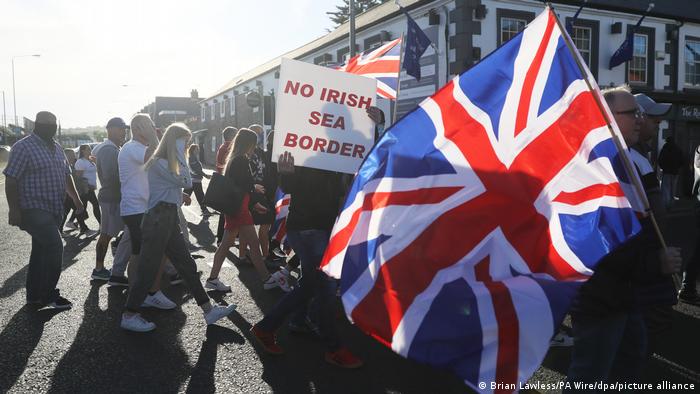 Even though some won't admit it, Northern Ireland has benefited economically from the protocol

When Boris Johnson survived his party's vote of confidence over the "Partygate" affair earlier this month, opinion was divided as to his political future. Some believed that he could rest assured with his grip on power secure, others feared that he would act even more irresponsibly in an effort to please party hardliners. Unfortunately, it seems the skeptics were right. The UK prime minister is now wantonly going after the Northern Ireland Protocol — the most sensitive element of the Brexit Agreement — not with a political axe, but a political chainsaw.

No 'trivial' breach of contract

International treaties are binding and cannot simply be changed unilaterally. In terms of International law, such a breach of contract could never be "trivial" no matter what Boris Johnson may claim, for it destroys trust among states. Yet once again, it seems the prime minister thinks he can just ignore the rules. He thinks that all he needs to do is invent an "emergency clause" to disable the Northern Ireland Protocol by claiming the treaty is not working and is instead hindering trade between mainland Britain and Northern Ireland.

Here is a quick refresher on this, the most difficult chapter of Brexit negotiations: A solution was needed to avoid creating a border between the Republic of Ireland, an EU member state, and Northern Ireland in order to maintain the 1998 Good Friday Agreement. At the same time, the EU wanted to make sure it protected its single market and the rules governing it by ensuring that no British goods could enter it uncontrolled. The result was a compromise obliging the UK to comply with certain controls, and which Johnson called "excellent" at the time he signed the Brexit deal.

The prime minister's claim that the agreement is unworkable is, despite some bureaucratic hurdles, simply untrue. In fact, Northern Ireland appears to be enjoying the best of both worlds. It has remained in the European single market despite Brexit, while at the same time being able to trade freely with the UK. Northern Ireland's current economic development is second in the UK only to greater London. Northern Ireland trade associations and the majority of its politicians oppose Johnson's approach. Brussels is fed up with the UK's theatrics

The European Commission has said that it will sue the UK if it goes through with this latest threat. The paperwork for such a step was filed with the European Court of Justice (ECJ) last summer. Should proceedings be launched, the UK would likely face financial penalties. The EU has said that if the UK denies payment, Brussels will slap tariffs on British goods. The result would be a full-on trade war. The EU has already fired the first warning shots, temporarily suspending special agreements governing fishing rights and scientific cooperation.

Patience has run out in Brussels because Boris Johnson is clearly a repeat offender. From the start, his government has consistently worked to undermine an agreement that it negotiated and signed. A number of further negotiations have been held since last summer with the EU making some concessions. But for months talks have been on ice as the British government has refused to come back to the table. London appears to be seeking to sabotage negotiations in order to justify withdrawing from the treaty altogether. Brussels has accused London of dealing in bad faith, male fide, as lawyers say.

An act of political insanity

Europe is currently fighting rising energy prices, inflation and extreme political stress as a result of the war in Ukraine. That applies to every country, without exception. In this situation the EU and UK need a trade war like they need the plague. It is an act of political insanity for which there is simply no excuse.

Boris Johnson, however, is guided by party and domestic political calculus. He wants to satisfy far-right Brexiteers in his own party as well as his allies in the Northern Irish DUP — who have blocked the formation of a government in Stormont since their election defeat in early May.

It is doubtful that the threat of breaching Brexit will achieve that purpose. But the habitual gambler Johnson is betting on it nevertheless: Irresponsibly, out of self-interest and with a player's willingness to take risks. Once again, the British prime minister is proving that he is unfit for the job. If Johnson is run out of Downing Street this year, Europe will breathe a sigh of relief.

This article was translated from German by Jon Shelton