Germany's government is seeking a "coalition of the willing" to take in the children across Europe. The EU wants to avoid a repeat the 2015 refugee crisis as thousands of refugees and migrants gather at Greece's border. 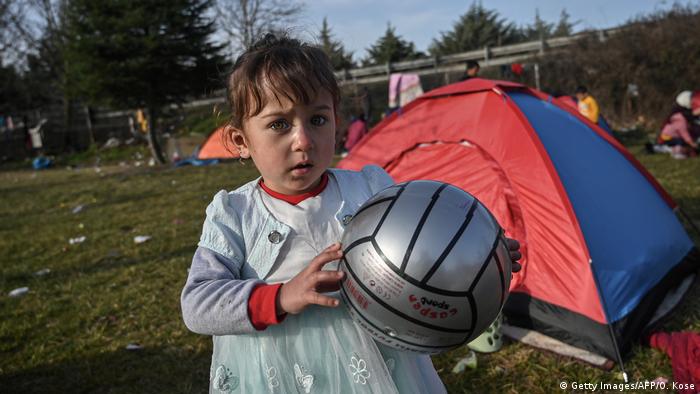 Germany is prepared to take in "an appropriate share" of the neediest refugee children housed in overcrowded Greek migrant camps, German officials said on Monday.

The country is set take children in as part of "a coalition of the willing" to be made up of other EU countries.

The announcement from the German government came after its Chancellor, Angela Merkel, met with members of her coalition government to discuss the humanitarian crisis on Greece's borders and in its migrants camps. Migrants and refugees have been amassing along the Greece-Turkey border ever since Turkey's President Recep Tayyip Erdogan said its borders were open to refugees seeking to cross into Greece.

Up to 1,500 children would be supported

The plan is set to help between 1,000 - 1,500 children identified as being particularly in need. This means either unaccompanied children under the age of 14 or children in need of urgent medical assistance. News agency AFP said most of those set to benefit were girls.

Chair of Germany's ruling CDU party,  Annegret Kramp-Karrenbauer, said that France could possibly join the "coalition of the willing." It is not known which other countries are interested in participating.

DW's Turkey correspondent Julia Hahn, who has been reporting from the border, described the conditions for children and families.

“It’s been particularly tough for families with small children," Hahn said on Monday. "Thousands of people have moved to the Greek border. It's been 11 days in the cold with a plastic tent at most. People are relying on food aid."

"We've also seen violent scenes playing out there," she added.

The EU says 'it won't be pressured'

Intense fighting in the Idlib region of Syria has caused a new wave of refugees to flee over the Turkish border. Turkey has already taken in over 3.5 million Syrian refugees assisted by billions of Euros of aid provided by the EU under a 2016 deal that ensured Turkey would stop the migrants and refugees entering Europe.

Erdogan said Turkey cannot cope with the new influx unless it receives more assistance from the EU, but last week the EU Foreign Affairs Council said it won't be pressured by Turkey into giving it more money.

EU leaders and Turkey's President Recep Tayyip Erdogan are due in Brussels later on Monday. They will "discuss EU-Turkey matters, including migration, security, stability in the region and the crisis in Syria," Michel's spokesman said on Twitter.

Berlin has insisted that the EU's "borders are not open" despite a new push of migrants and refugees at the Turkish-Greek frontier. Up to 5,000 people have gathered in the northern city, chanting "Hamburg has space." (07.03.2020)

Ankara says Greek forces were "hitting" and "bullying" refugees attempting to make the crossing. President Erdogan is set to travel to Brussels to discuss the crisis at the Turkish-Greek border. (08.03.2020)

As the EU's top diplomats met to discuss tensions with Ankara, Josep Borrell said NATO or the UN should implement a no-fly zone. Turkey has opened its borders, seeking support for its military efforts in Syria. (05.03.2020)