European Union foreign ministers met to work out a response to the migrant crisis at Greece's border with Turkey. Germany's Heiko Maas called on EU nations to do something about the "unspeakable" conditions there. 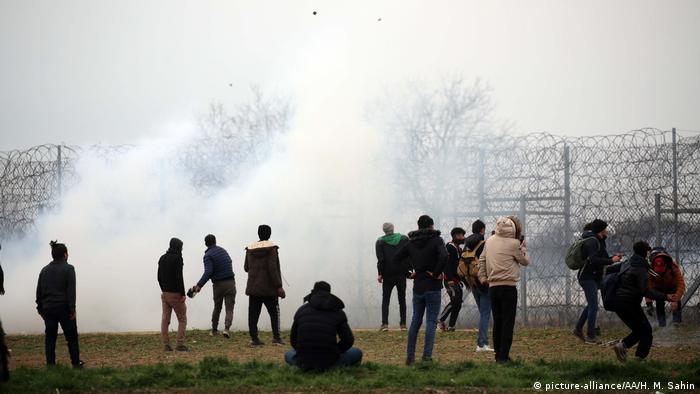 Ministers from across the EU met on Friday for a second day of talks on the build-up of refugees and migrants at Greece's border with Turkey.

"The situation at the EU external border is not acceptable. The EU and its Member States remain determined to effectively protect the EU's external borders. Illegal crossings will not be tolerated," said the Foreign Affairs Council in a statement released after the meeting.

The EU also reiterated its "full solidarity with Greece," saying the country faces "an unprecedented situation."

"Don't go to the border; the border is not open," Josep Borrell, High Representative of the EU for Foreign Affairs and Security Policy said after talks the in Zagreb.

DW's correspondent in the Croatian capital Georg Matthes said the general feeling was that there should be no illegal trespassing into the EU.

"Overall all the ministers here welcomed the measures that have been taken by Greece to protect those borders with German Foreign Minister Heiko Maas making clear that illegal passage would create chaos and more human suffering," said Matthes.

Germany's Foreign Minister Heiko Maas after the meeting called on EU members to take their share of responsibility, saying: "If all carried out their humanitarian responsibility, like in the case of Germany, then Europe would have one less problem."

Germany wants a "European solution," and other countries cannot be constantly be let off duty, he said.

Germany's government said there would be no extra money directly for the Turkish state to assist migrants, but that it would provide to aid groups.

"We should not react to the pressure that Turkey is exerting on us by agreeing to more money under pressure," he said.

Thousands of migrants have massed on the Turkish side of the border with Greece at Pazarkule, after a decision by Ankara to stop preventing them from reaching the EU's outer border. Greece has said it will protect its frontier and will not allow the migrants in.

Turkey is host to some 4 million refugees, including 3.6 million Syrians, and has said it can no longer contain the refugee influx from Syria. Around 1 million people have been displaced after a military escalation in the Syrian province of Idlib.

At a meeting on Thursday, ministers expressed cautious support for Ankara's request to establish a no-fly zone in north-west Syria.

The situation at the border

Julia Hahn, DW's correspondent on the Turkish side of the border, said journalists had been prevented from getting close to the frontier, with reports that tear gas was being fired by Turkish police.

"There are some reports suggesting that the soldiers there are encouraging the refugees or migrants maybe to use violence to demand passage to Europe. The people we talked to also told us that although they have some access to food and drinks, the temperatures here are particularly difficult. They also told us that there are still thousands there waiting to cross into the European Union."

'We have no other choice': Afghans stranded at Greece's gates

For days, migrants and refugees have been attempting to cross over from Turkey into Greece. There are many Afghans among them who have been waiting to start a new life in Europe for years. (04.03.2020)

Thousands of migrants and refugees have gathered at the Turkish-Greek border, desperate to make it into the European Union. DW correspondent Tunca Ögreten spent two days there, and reports a volatile situation. (03.03.2020)