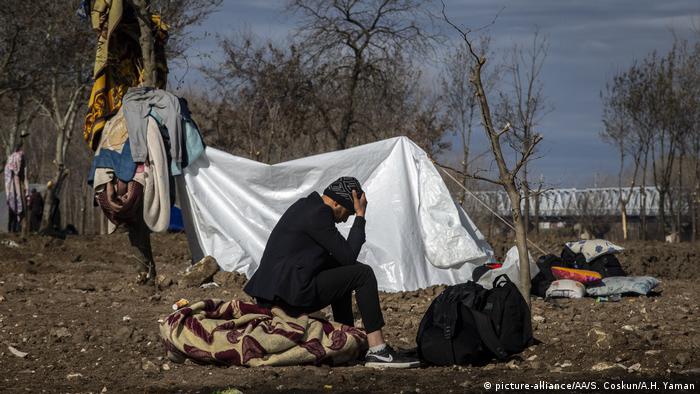 Thousands of migrants and refugees have gathered at the Turkish-Greek border, desperate to make it into the European Union. Turkey's President Recep Tayyip Erdogan has called on Europe to share the migrant "burden." Some now are drawing parallels to the 2015 migrant influx, saying the past few weeks have felt like deja vu — but whether the EU is any better prepared than it was five years ago remains to be seen.

At the height of the refugee crisis in 2015 and 2016, Germany took in around 1 million asylum-seekers — many fleeing conflicts in countries like Syria, Iraq and Afghanistan and who were looking for safety in Europe.

German Chancellor Angela Merkel sought to rally the country with the phrase: "We can do this" ("Wir schaffen das").  Thousands of volunteers nationwide stepped up to support the new arrivals — but the rallying cry rang hollow to border authorities and local officials who were swamped and felt unsupported.

"The problem in 2015 was that the countries in southern Europe simply waved through unregistered refugees and sent them in the direction of northern Europe," Heiko Teggatz, the head of the federal police union, told DW. "That shouldn't have happened."

The authorities who registered the new arrivals and took on their cases lacked not only personnel, but key equipment. As recently as 2017, nearly 40% of the immigration offices in Germany lacked technical equipment used for identification — with many names incorrectly spelled in the system and fingerprints attributed to the wrong person.

Much of the work fell to Germany's nearly 11,000 municipalities, who were responsible for housing as well as integrating the new arrivals. Due to a lack of space, many asylum-seekers were placed in makeshift centers built from shipping containers, or housed in gymnasiums.

"From the perspective of the municipalities, a situation like the one in 2015 should not be repeated," Alexander Handschuh, the spokesperson for the German Association of Towns and Municipalities, said. "That would lead to an overload."

What's changed in Germany since then?

Although many stepped up to help during the crisis in 2015, the arrival of refugees and the bureaucratic chaos that ensued also fed into the rise of right-wing populism in Germany. In 2017, the far-right Alternative for Germany (AfD) garnered enough support to enter the German parliament for the first time after campaigning on an anti-immigration platform.

Five years later, Merkel stands by her decision and says it was necessary to avert a humanitarian crisis, but she also says that "mistakes" were made in the way it way handled.

New systems and personnel have helped Germany's towns and municipalities become better prepared to handle new arrivals — up to a certain point. Cross-border cooperation within the EU has also improved, including the creation of a central data bank which stores the fingerprints of asylum-seekers.

The German government has also since pushed for increased security at the country's borders, with around 3,000 to 5,000 officers. Teggatz told DW that the police powers have also been expanded so that officers are also now allowed to use pepper spray and water cannons to deter "unauthorized border crossings."

Politically, things have taken a turn to the right. Efforts to come up with an EU-wide asylum policy have failed, with countries including Hungary and Poland rejecting efforts to distribute migrants equally among member states. "Hot spotarrival points in Greece and Italy remain under pressure, with authorities there arguing that they've been left alone by Brussels.

An EU project following the developments over the past few years came to the conclusion that in response to the situation in 2015, governments enacted "very restrictive measures" to discourage migrants and refugees.

"Nothing has really changed for the better since 2015," Professor Sabine Hess, one of the project leaders and a cultural anthropologist at the University of Göttingen, told DW.

Hess noted that politicians have only been able to come up with ideas on bolstering the borders "instead of thinking about the global problems that cause people to flee."

What is the EU-Turkey refugee accord and is it still active?

In a bid to prevent another wave of migration into Europe, the EU and Turkey signed a deal in 2016 to regulate the flow of migrants. Under the agreement, Turkey agreed to prevent human traffickers from sending refugees to the EU and to take back Syrian refugees who arrived in Greece.

In exchange, Brussels agreed that for every Syrian refugee sent back to Turkey, another would be resettled in the bloc. The EU also agreed to provide Ankara with financial assistance and speed up EU accession talks, as well as loosening visa requirements and extending the customs union.

Under the deal, migrant arrivals in the EU dropped off significantly compared to the situation in 2015 and in 2016.

Since then, the EU has either already paid or has budgeted around €6 billion ($6.7 billion) in financial aid and projects for the around 3.6 million Syrian refugees who are being hosted by Turkey. Ankara has regularly complained that the EU has not held up its part of the bargain, and that payments have been slow. Due to concerns about rule of law in Turkey, the EU has also not yet followed through on membership talks or loosening visa requirements.

When Erdogan announced his country's borders with the EU were open over the weekend, many viewed the move as a signal that the deal was off.

However, both Germany and the EU said this week that they continue to operate under the assumption that the deal with Turkey is still being implemented — although they've strongly criticized the move.

Both France and Austria have slammed Turkey for "blackmailing" the EU, while Merkel said it was "completely unacceptable" that Turkey is using refugees as political pawns.

What role is Frontex playing?

Since the mass arrival of asylum-seekers in 2015, the European Border and Coast Guard Agency — or Frontex — has played an increasingly important role in the EU's refugee policies.

"After the crisis of 2015, a pool of officers for rapid intervention was created, and that's the pool we're drawing on right now to deploy in Greece — both at the sea border and at the land border," Frontex spokesperson Ewa Moncure told DW.

The German government said this week that it will send 20 additional officers to support Greek authorities at the border as well as an amphibious helicopter. There are currently 60 German federal police officers taking part in Frontex operations in Greece.

Frontex is also building up its own standing corps after a new regulation went into effect in 2019, with the agency getting a massive budget boost amounting to €1.6 billion ($1.7 billion) in the coming year.

"We are still using the old mechanism that is used for the rapid deployment — but in the future that will be more flexible," Moncure said.

Refugee crisis on the border with Greece